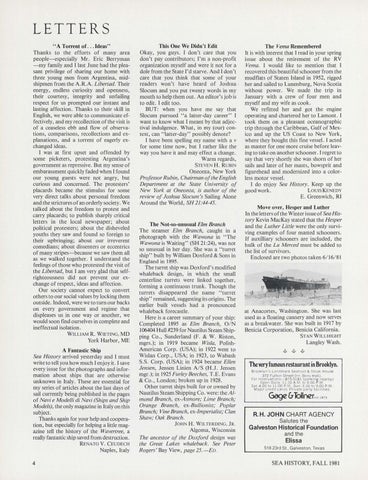 LETTERS &quot;A Torrent of. .. Ideas&quot; Thanks to the efforts of many area people-especially Mr. Eric Berryman -my family and I last June had the pleasant privilege of sharing our home with three young men from Argentina, midshipmen from the A.R.A. Libertad. Their energy, endless curiosity and openness, their courtesy, integrity and unfailing respect for us prompted our instant and lasting affection. Thanks to their skill in English , we were able to communicate effectively, and my recollection of the visit is of a ceaseless ebb and flow of observations, comparisons, recollections and explanations, and a torrent of eagerly exchanged ideas . I was at first upset and offended by some picketers, protesting Argentina&#39;s government as repressive. But my sense of embarassment quickly faded when I found our young guests were not angry, but curious and concerned. The protesters&#39; placards became the stimulus for some very direct talks about personal freedom and the strictures of an orderly society. We talked about the freedom to protest and carry placards; to publish sharply critical letters in the local newspaper; about political protesters; about the disheveled youths they saw and found so foreign to their upbringing; about our irreverent comedians; about dissenters or eccentrics of many stripes-because we saw them all as we walked together. I understand the feelings of those who protested the visit of the Libertad, but I am very glad that selfrighteousness did not prevent our exchange of respect, ideas and affection. Our society cannot expect to convert others to our social values by locking them outside. Indeed, were we to turn our backs on every government and regime that displeases us in one way or another, we would soon find ourselves in complete and ineffectual isolation. WILLIAM R. WI ETING, MD York Harbor, ME A Fantastic Ship Sea History arrived yesterday and I must write to tell you how much I enjoy it. I save every issue for the photographs and information about ships Âˇt hat are otherwise unknown in Italy . These are essential for my series of articles about the last days of sail currently being published in the pages of Navi e Modelli di Navi (Ships and Ship Models), the only magazine in Italy on this subject. Thanks again for your help and cooperation, but especially for helping a little magazine tell the history of the Wavertree, a really fantastic ship saved from destruction . RENATO V. CEUDECH Naples, Italy 4

This One We Didn&#39;t Edit Okay, you guys. I don&#39;t care that you don&#39;t pay contributors; I&#39;m a non-profit organization myself and were it not for a dole from the State I&#39;d starve. And I don&#39;t care that you think that some of your readers won&#39;t have heard of Joshua , Slocum and you put twenty words in my mouth to help them out. An editor&#39;s job is to edit. I edit too. BUT: when you have me say that Slocum pursued &quot;a latter-day career&quot; I want to know what I meant by that adjectival indulgence. What, in my (our) context, can &quot;latter-day&quot; possibly denote? I have been spelling my name with a v for some time now, but I rather like the way you have it and may effect a change. Warm regards, STEVEN H . RUBIN Oneonta, New York Professor Rubin, Chairman of the English Department at the State University of New York at Oneonta, is author of the review of Joshua Slocum&#39;s Sailing Alone Around the World, SH 21:44-45.

The Not-so-unusual Elm Branck The steamer Elm Branch, caught in a photograph with the Wawona in &quot;The Wawona is Waiting&quot; (SH 21 :24), was not so unusual in her day. She was a &quot;turret ship&quot; built by William Doxford &amp; Sons in England in 1895 . The turret ship was Doxford&#39;s modified whaleback design, in which the small centerline turrets were linked together, forming a continuous trunk. Though the turrets disappeared the name &quot;turret ship&#39;&#39; remained, suggesting its origins. The earlier built vessels had a pronounced whaleback forecastle . Here is a career summary of your ship: Completed 1895 as Elm Branch, O/N I 06404 Hull #239 for Nautilus Steam Shipping Co., Sunderland (F. &amp; W. Riston, mgrs.); in 1919 became Wis/a, PolishAmerican Corp. (USA); in 1922 went to Wislan Corp., USA; in 1923, to Wabash S.S. Corp . (USA); in 1924 became Ellen Jensen, Jensen Linien A/ S (H.J . Jensen mgr.); in 1925 Furfey Beeches, T.E . Evans &amp; Co., London; broken up in 1928. Other turret ships built for or owned by Nautilus Steam Shipping Co. were: the Almond Branch, ex-Asmore; Lime Branch; Orange Branch, ex-Bu!lion ist; Poplar Branch; Vine Branch, ex-Imperialist; Clan Shaw; Oak Branch. JOHN H. WILTERDING, JR. Algoma, Wisconsin The ancestor of the Doxford design was the Great Lakes wha/eback. See Peter Rogers&#39; Bay View, page 25.-ED.

The Verna Remembered It is with interest that I read in your spring issue about the retirement of the RV Verna. I would like to mention that I recovered this beautiful schooner from the mudflats of Staten Island in 1952, rigged her and sailed to Lunenburg, Nova Scotia without power. We made the trip in January with a crew of four men and myself and my wife as cook. We refitted her and got the engine operating and chartered her to Lamont . I took them on a pleasant oceanographic trip through the Caribbean, Gulf of Mexico and up the US Coast to New York, where they bought this fine vessel. I acted as master for one more cruise before leaving to take on another schooner. I regret to say that very shortly she was shorn of her sails and later of her masts, bowsprit and figurehead and .modernized into a colorless motor vessel. I do enjoy Sea History. Keep up the good work. LOUIS KENEDY E. Greenwich, RI Move over, Hesper and Luther In the letters of the Winter issue of Sea History Kevin MacKay stated that the Hesper and the Luther Little were the only surviving examples of four masted schooners. If auxilliary schooners are included, the hulk of the La Merced must be added to the list of survivors. Enclosed are two photos taken 6/ 16/81

at Anacortes, Washington. She was last used as a floating cannery and now serves as a breakwater. She was built in 1917 by Benicia Corporation, Benicia California. STAN WILLHIGHT Langley Wash.

Galveston Historical Foundation and the