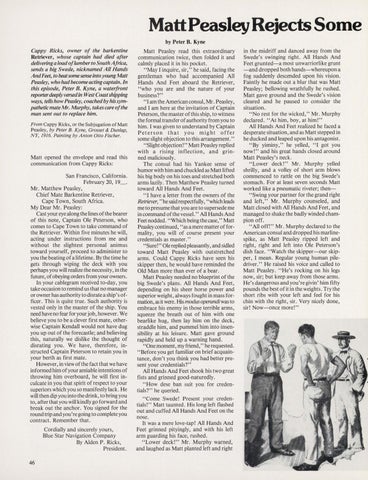 Matt Peasley Rejects Some by Peter B. Kyne Cappy Ricks, owner of the barkentine Retriever, whose captain had died after delivering a load oflumber to South Africa, sends a big Swede, nicknamed All Hands And Feet, to beat some sense into young Matt Peasley, who had become acting captain. In this episode, Peter B. Kyne, a water/ront reporter deeply versed in West Coast shipping ways, tells how Peasley, coachedbyhissympatheticmateMr. Murphy, takes care ofthe man sent out to replace him. From Cappy Ricks, or the Subjugation of Matt Peasley, by Peter B. Kyne, Grosset & Dunlap, NY, 1916. Painting by Anton Otto Fischer.

Matt opened the envelope and read this communication from Cappy Ricks: San Francisco, California. February 20, 19_. Mr. Matthew Peasley, Chief Mate Barkentine Retriever, Cape Town, South Africa. My Dear Mr. Peasley: Cast your eye along the lines of the bearer of this note, Captain Ole Peterson, who comes to Cape Town to take command of the Retriever. Within five minutes he will, acting under instructions from me and without the slightest personal animus toward yourself, proceed to administer to you the beating of a lifetime. By the time he gets through wiping the deck with you perhaps you will realize the necessity, in the future, of obeying orders from your owners. In your cablegram received to-day, you take occasion to remind us that no manager or owner has authority to disrate a ship's officer. This is quite true. Such authority is vested only in the master of the ship. You need have no fear for your job, however. We believe you to be a clever first mate, otherwise Captain Kendall would not have dug you up out of the forecastle; and believing this, naturally we dislike the thought of disrating you. We have, therefore, instructed Captain Peterson to retain you in your berth as first mate. However, in view of the fact that we have informed him of your amiable intentions of throwing him overboard, he will first inculcate in you that spirit of respect to your superiors which you so manifestly lack. He will then dip you into the drink, to bring you to, after that you will kindly go forward and break out the anchor. You signed for the round trip and you 're going to complete you contract. Remember that. Cordially and sincerely yours, Blue Star Navigation Company By Alden P. Ricks, President.

Matt Peasley read this extraordinary communication twice, then folded it and calmly placed it in his pocket. "May I inquire, sir," he said, facing the gentleman who had accompanied All Hands And Feet aboard the Retriever, "who you are and the nature of your business?" ''I am the American consul, Mr. Peasley, and I am here at the invitation of Captain Peterson, the master of this ship, to witness the formal transfer of authority from you to him. I was given to understand by Captain Peterson that you might offer some slight objection to this arrangement.'' ''Slight objection!'' Matt Peasley replied with a rising inflection, and grinned maliciously . The consul had his Yankee sense of humor with him and chuckled as Matt lifted his big body on his toes and stretched both arms lazily. Then Matthew Peasley turned toward All Hands And Feet. "I have a letter from the owners of the Retriever, "he said respectfully, ''which leads me to presume that you are to supersede me in command of the vessel." All Hands And Feet nodded. "Which being the case," Matt Peasley continued, "as amere matter of formality, you will of course present your credentials as master." "Sure!" Ole replied pleasantly, and sidled toward Matt Peasley with outstretched arms. Could Cappy Ricks have seen his skipper then, he would have reminded the Old Man more than ever of a bear. Matt Peasley needed no blueprint of the big Swede's plans. All Hands And Feet, depending on his sheer horse power and superior weight, always fought in mass formation, as it were. His modus operandi was to embrace his enemy in those terrible arms, squeeze the breath out of him with one bearlike hug, then lay him on the deck, straddle him, and pummel him into insensibility at his leisure. Matt gave ground rapidly and held up a warning hand . "One moment, my friend," he requested. "Before you get familiar on brief acquaintance, don't you think you had better present your credentials?" All Hands And Feet shook his two great fists and grinned good-naturedly. "How dese ban suit you for credentials?" he queried. "Come Swede! Present your credentials!" Matt taunted. His long left flashed out and cuffed All Hands And Feet on the nose . It was a mere love-tap! All Hands And Feet grinned pityingly, and with his left arm guarding his face, rushed. "Lower deck!" Mr. Murphy warned, and laughed as Matt planted left and right

in the midriff and danced away from the Swede's swinging right. All Hands And Feet grunted-a most unwarriorlike grunt -and dropped both hands-whereupon a fog suddenly descended upon his vision. Faintly he made out a blur that was Matt Peasley; bellowing wrathfully he rushed . Matt gave ground and the Swede's vision cleared and he paused to consider the situation. "No rest for the wicked," Mr. Murphy declared. "At him, boy, at him!" All Hands And Feet realized he faced a desperate situation, and as Matt stepped in he ducked and leaped upon his antagonist. "By yiminy," he yelled, "I got you now!" and his great hands closed around Matt Peasley's neck. "Lower deck!" Mr. Murphy yelled shrilly, and a volley of short arm blows commenced to rattle on the big Swede's stomach. For at least seven seconds Matt worked like a pneumatic riveter; then' 'Swing your partner for the grand right and left," Mr. Murphy counseled, and Matt closed with All Hands And Feet, and managed to shake the badly winded champion off. "All off!" Mr. Murphy declared to the American consul and dropped his marlinespike, as Matt Peasley ripped left and right, right and left into Ole Peterson's dish face . "Watch the skipper-our skipper, I mean. Regular young human piledriver." He raised his voice and called to Matt Peasley. "He's rocking on his legs now, sir; but keep away from those arms. He's dangerous and you're givin' him fifty pounds the best of it in the weights. Try the short ribs with your left and feel for his chin with the right, sir. Very nicely done, sir! Now-once more!"