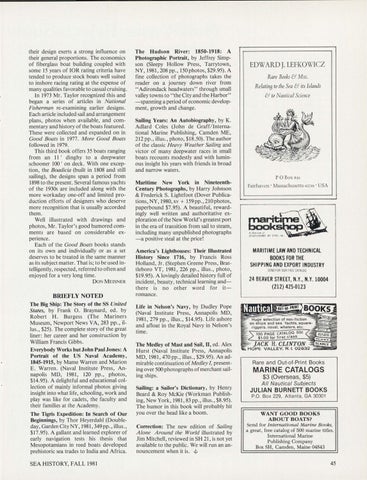 their design exerts a strong influence on their general proportions. The economics of fiberglass boat building coupled with some 15 years of !OR rating criteria have tended to produce stock boats well suited to inshore racing rating at the expense of many qualities favorable to casual cruising. Jn 1973 Mr. Taylor recognized this and began a series of articles in National Fisherman re-examining earlier designs. Each article included sail and arrangement plans, photos when available, and commentary and history of the boats featured. These were collected and expanded on in Good Boats in 1977. More Good Boats followed in 1979. This third book offers 35 boats ranging from an 11 ' dinghy to a deepwater schooner 100' on deck. With one exception, the Boadicia (built in 1808 and still sailing), the designs span a period from 1898 to the present. Several famous yachts of the 1930s are included along with the more workaday one-off and limited production efforts of designers who deserve more recognition that is usually accorded them. Well illustrated with drawings and photos, Mr. Taylor's good humored comments are based on considerable experience. Each of the Good Boats books stands on its own and individually or as a set deserves to be treated in the same manner as its subject matter. That is; to be used intelligently, respected, referred to often and enjoyed for a very long time. DON MEISNER

BRIEFLY NOTED The Big Ship: The Story of the SS United States, by Frank 0. Braynard, ed. by Robert H. Burgess (The Mariners Museum, Newport News VA, 283 pp., illus., $25). The complete story of the great liner: her career and her construction by William Francis Gibbs. Everybody Works but John Paul Jones: A Portrait of the US Naval Academy, 1845-1915, by Mame Warren and Marion E. Warren. (Naval Institute Press, Annapolis MD, 1981, 120 pp., photos, $14.95). A delightful and educational collection of mainly informal photos giving insight into what life, schooling, work and play was like for cadets, the faculty and their families at the Academy. The Tigris Expedition: In Search of Our Beginnings, by Thor Heyerdahl (Doubleday, Garden City NY, 1981, 349pp., illus., $17 .95). A gallant and learned explorer of early navigation tests his thesis that Mesopotamians in reed boats developed prehistoric sea trades to India and Africa. SEA HISTORY, FALL 1981

The Hudson River: 1850-1918: A Photographic Portrait, by Jeffrey Simpson (Sleepy Hollow Press, Tarrytown, NY, 1981, 208 pp., 150photos, $29.95). A fine collection of photographs takes the reader on a journey down river from "Adirondack headwaters" through small valley towns to "the City and the Harbor" -spanning a period of economic development, growth and change.

Sailing Years: An Autobiography, by K. Adlard Coles (John de Graff/International Marine Publishing, Camden ME, 212 pp., illus., photo, $18.50). The author of the classic Heavy Weather Sailing and victor of many deepwater races in small boats recounts modestly and with luminous insight his years with friends in broad and narrow waters. P 0 Box 630

Maritime New York in NineteenthCentury Photographs, by Harry Johnson & Frederick S. Lightfoot (Dover Publications, NY, 1980,xv + 159pp.,210photos, paperbound $7.95). A beautiful, rewardingly well written and authoritative exploration of the New World's greatest port in the era of transition from sail to steam, including many unpublished photographs -a positive steal at the price!

MARITIME LAW AND TECHNICAL BOOKS FOR THE SHIPPING AND EXPORT INDUSTRY

~ on ships and sea. Yachts, square

Correction: The new edition of Sailing Alone Around the World illustrated by

Jim Mitchell, reviewed in SH 21, is not yet available to the public. We will run an announcement when it is. .t