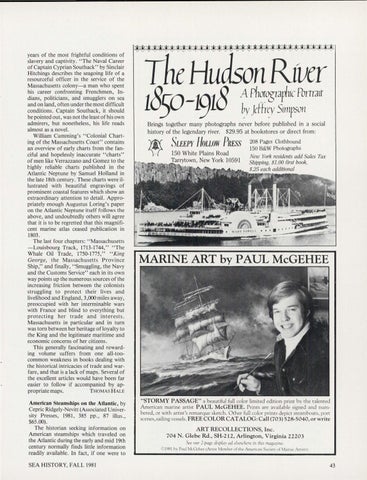 years of the most frightful conditions of slavery and captivity. "The Naval Career of Captain Cyprian Southack" by Sinclair Hitchings describes the seagoing life of a resourceful officer in the service of the Massachusetts colony-a man who spent his career confronting Frenchmen, Indians, politicians, and smugglers on sea and on land, often under the most difficult conditions. Captain Southack, it should be pointed out, was not the least of his own admirers, but nonetheless, his life reads almost as a novel. William Cumming's "Colonial Charting of the Massachusetts Coast" contains an overview of early charts from the fanciful and hopelessly inaccurate "charts" of men like Verrazzano and Gomez to the bghly reliable charts published in the Atlantic Neptune by Samuel Holland in the late 18th century. These charts were illustrated with beautiful engravings of prominent coastal features which show an extraordinary attention to detail. Appropriately enough Augustus Loring's paper on the Atlantic Neptune itself follows the above, and undoubtedly others will agree that it is to be regretted that this magnificent marine atlas ceased publication in 1803. The last four chapters: "Massachusetts -Louisbourg Track, 1713-1744," "The Whale Oil Trade, 1750-1775," "King George, the Massachusetts Province Ship," and finally, "Smuggling, the Navy and the Customs Service" each in its own way points up the numerous sources of the increasing friction between the colonists struggling to protect their lives and livelihood and England, 3,000 miles away, preoccupied with her interminable wars with France and blind to everything but protecting her trade and interests. Massachusetts in particular and in turn was torn between her heritage of loyalty to the King and the legitimate maritime and economic concerns of her citizens. This generally fascinating and rewarding volume suffers from one all-toocommon weakness in books dealing with the historical intricacies of trade and warfare, and that is a lack of maps. Several of the excellent articles would have been far easier to follow if accompanied by appropriate maps. THOMAS HALE American Steamships on the Atlantic, by Cepric Ridgely-Nevitt (Associated University Presses, 1981, 385 pp., 87 illus., $65.00). The historian seeking information on American steamships which traveled on the Atlantic during the early and mid 19th century normally finds little information readily available. In fact, if one were to SEA HISTORY, FALL 1981

Brings together many photographs never before published in a social history of the legendary river. $29.95 at bookstores or direct from: