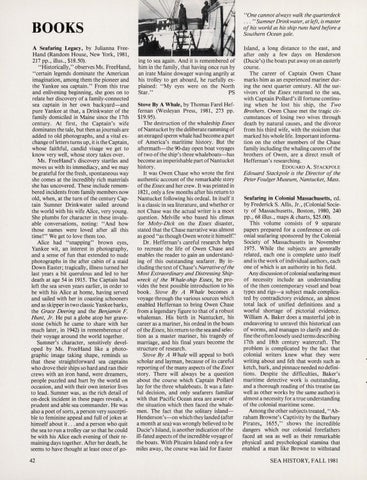 " One cannot always walk the quarterdeck ... "Sumner Drinkwater, at left, is master of his world as his ship runs hard before a Southern Ocean gale.

BOOKS A Seafaring Legacy, by Julianna FreeHand (Random House, New York, 1981, 217 pp., illus., $18.50). "Historically," observes Ms. FreeHand, "certain legends dominate the American imagination, among them the pioneer and the Yankee sea captain." From this true and enlivening beginning, she goes on to relate her discovery of a family-connected sea captain in her own backyard-and pure Yankee at that, a Drinkwater of the family domiciled in Maine since the 17th century. At first, the Captain's wife dominates the tale, but then as journals are added to old photographs, and a vital exchange ofletters turns up, it is the Captain , whose faithful, candid visage we get to know very well, whose story takes over. Ms. FreeHand's discovery startles and moves us with its immediacy, and we may be grateful for the fresh, spontaneous way she comes at the incredibly rich materials she has uncovered. These include remembered incidents from family members now old, when, at the tum of the century Captain Sumner Drinkwater sailed around the world with his wife Alice, very young. She plumbs for character in these invaluable conversations, noting: "And how those names were loved after all this time!" We get to love them too . Alice had "snapping" brown eyes, Yankee wit, an interest in photography, and a sense of fun that extended to nude photographs in the after cabin of a staid Down Easter; tragically, illness turned her last years a bit querulous and led to her death at age 54 in 1915. The Captain had left the sea seven years earlier, in order to be with his Alice at home, having served and sailed with her in coasting schooners and as skipper in two classic Yankee barks, the Grace Deering and the Benjamin F. Hunt, Jr. He put a globe atop her gravestone (which he came to share with her much later, in 1942) in rememberence of their voyage around the world together. Sumner's character, sensitively developed by Ms. FreeHand like a photographic image taking shape, reminds us that these straightforward sea captains who drove their ships so hard and ran their crews with an iron hand, were dreamers, people puzzled and hurt by the world on occasion, and with their own interior lives to lead. Sumner was, as the rich detail of on-deck incident in these pages reveals, a prudent and able sea commander. He was also a poet of sorts, a person very susceptible to feminine appeal and full of jokes at himself about it ... and a person who quit the sea to run a trolley car so that he could be with his Alice each evening of their remaining days together. After her death, he seems to have thought at least once of go-

ing to sea again. And it is remembered of him in the family, that having once run by an irate Maine dowager waving angrily at his trolley to get aboard, he ruefully explained: "My eyes were on the North Star. " PS Stove By A Whale, by Thomas Fare! Heffernan (Wesleyan Press, 1981, 273 pp . $19.95). The destruction of the whaleship Essex of Nantucket by the deliberate ramming of an enraged sperm whale had become a part of America's maritime history. But the aftermath-the 90-day open boat voyages of two of the ship's three whaleboats-has become an imperishable part of Nantucket history. It was Owen Chase who wrote the first authentic account of the remarkable story of the Essex and her crew . It was printed in 1821, only a few months after his return to Nantucket following his ordeal. In itself it is a classic in sea literature, and whether or not Chase was the actual writer is a moot question . Melville who based his climax for Moby-Dick on the Essex disaster, stated that the Chase narrative was almost as good "as though Owen wrote it himself:' Dr. Heffeman's careful research helps to recreate the life of Owen Chase and enables the reader to gain an understanding of this outstanding seafarer. By including the text of Chase's Narrative of the Most Extraordinary and Distressing Shipwreck of the Whale-ship Essex, he provides the best possible introduction to his book . Stove By A Whale becomes a voyage through the various sources which enabled Heffernan to bring Owen Chase from a legendary figure to that of a robust whaleman . His birth in Nantucket, his career as a mariner, his ordeal in the boats of the Essex, his return to the sea and selection as a master mariner, his tragedy of marriage, and his final years become the structure of research. Stove By A Whale will appeal to both scholar and layman, because of its careful reporting of the many aspects of the Essex story. There will always be a question about the course which Captain Pollard lay for the three whaleboats. It was a fateful decision, and only seafarers familiar with that Pacific Ocean area are aware of the situation which then faced the whalemen. The fact that the solitary islandHenderson's-on which they landed (after a month at sea) was wrongly believed to be Ducie's Island, is another indication of the ill-fated aspects of the incredible voyage of the boats. With Pitcairn Island only a few miles away, the course was laid for Easter

Island, a long distance to the east, and after only a few days on Henderson (Dude's) the boats put away on an easterly course. The career of Captain Owen Chase marks him as an experienced mariner during the next quarter century. All the survivors of the Essex returned to the sea, with Captain Pollard's ill fortune continuing when he lost his ship, the Two Brothers. Owen Chase met the tragic circumstances of losing two wives through death by natural causes, and the divorce from his third wife, with the stoicism that marked his whole life. Important information on the other members of the Chase family including the whaling careers of the brothers of Owen, are a direct result of Heffernan's researching. EDOU ARD A. STACKPOLE Edouard Stackpole is the Director of the Peter Foulger Museum, Nantucket, Mass. Seafaring in Colonial Massachusetts, ed. by Frederick S. Allis, Jr., (Colonial Society of Massachusetts, Boston, 1980, 240 pp., 68 illus ., maps & charts, $25 .00) . This volume consists of 9 separate papers prepared for a conference on colonial seafaring sponsored by the Colonial Society of Massachusetts in November 1975. While the subjects are generally related, each one is complete unto itself and is the work of individual authors, each one of which is an authority in his field. Any discussion of colonial seafaring must of necessity include an understanding of the then contemporary vessel and boat types and rigs-a subject made complicated by contradictory evidence, an almost total lack of unified definitions and a woeful shortage of pictorial evidence. William A. Baker does a masterful job in endeavoring to unravel this historical can of worms, and manages to clarify and define the often loosely used terms describing 17th and 18th century watercraft. The problem is complicated by the fact that colonial writers knew what they were writing about and felt that words such as ketch, bark, and pinnace needed no definitions. Despite the difficulties, Baker's maritime detective work is outstanding, and a thorough reading of this treatise (as well as other works by the same author) is almost a necessity for a true understanding of the colonial maritime scene. Among the other subjects treated, "Abraham Browne's Captivity by the Barbary Pirates. 1655," shows the incredible dangers which our colonial forefathers faced att sea as well as their remarkable physicall and psychological stamina that enabled a man like Browne to withstand