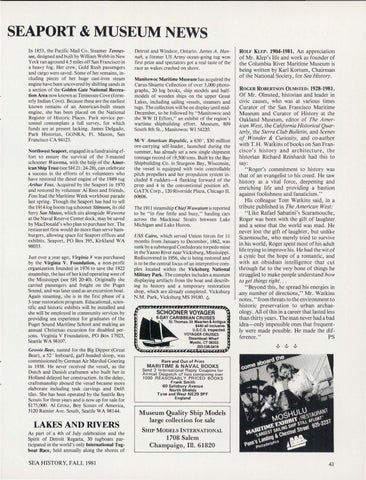 SEAPORT & MUSEUM NEWS Jn 1853, the Pacific Mail Co. Steamer Tennessee, designed and built by William Webb in New York ran aground4.5 miles off San Francisco in a heavy fog. Her crew, Gold Rush passengers and cargo were saved. Some of her remains, including pieces of her huge cast-iron steam engine have been uncovered by shifting sands in a section of the Golden Gate National Recreation Area now known as Tennessee Cove (formerly Indian Cove). Because these are the earliest known remains of an American-built steam engine, she has been placed on the National Register of Historic Places. Park service personnel contemplate a full survey, for which funds are at present lacking. James Delgado, Park Historian, GGNRA, Ft. Mason, San Francisco CA 94123. Northwest Seaport, engaged in a fundraising effort to ensure the survival of the 3-masted schooner Wawona, with the help of the American Ship Trust (see SH 21 : 24-28), can celebrate a success in the efforts of its volunteers who have restored the diesel engine of the 1889 tug Arthur Foss. Acquired by the Seaport in 1970 and restored by volunteer Al Rees and friends, Foss lead the Maritime Week workboat parade last spring. Though the Seaport has had to sell the 1914 log boom tug schooner Stimson, its old ferry San Mateo, which sits alongside Wawona at the Naval Reserve Center dock, may be saved by MacDonald's who plan to purchase her. The restaurant firm would do more than serve hamburgers, allowing space for Seaport offices and exhibits. Seaport, PO Box 395, Kirkland WA 98033 . Just over a year ago, Virginia V was purchased by the Virginia V. Foundation, a non-profit organization founded in 1976 to save the 1922 steamship, the last of her kind operating west of the Mississippi (see SH 20:40). Originally she carried passengers and freight on the Puget Sound, and was later used as an excursion boat. Again steaming, she is in the first phase of a 3-year restoration program. Educational, scientific and historic exhibits will be installed and she will be employed in community services by providing sea experience for graduates of the Puget Sound Maritime School and making an annual Christmas excursion for disabled persons. Virginia V Foundation, PO Box 17923, Seattle WA 98107. Groote Beer, named for the Big Dipper (Great Bear), a 52 ' leeboard, gaff-headed sloop, was commissioned by German Air Marshal Goering in 1938. He never received the vessel, as the Dutch and Danish craftsmen who built her in Holland delayed her construction. In the delay, craftsmanship aboard the vessel became more elaborate including teak carvings and Delft tiles. She has been operated by the Seattle Boy Scouts for three years and is now up for sale for $175,000. Al Grosz, Boy Scouts of America, 3120 Rainier Ave. South, Seattle WA 98144.

LAKES AND RIVERS As part of a 4th of July celebration and the Spirit of Detroit Regatta, 30 tugboats participated in the world's only International Tugboat Race, held annually along the shores of SEA HISTORY, FALL 1981

Detroit and Windsor, Ontario. James A. Hannah, a former US Army ocean-going tug won first prize and spectators got a real taste of the race as wakes crashed on shore. Manitowoc Maritime Museum has acquired the Carus-Shuette Collection of over 3,000 photographs, 20 log books, ship models and halfmodels of wooden ships on the upper Great Lakes, including sailing vessels, steamers and tugs. The collection will be on display until midDecember, to be followed by "Manitowoc and the WW II Effort," an exhibit of the region's wartime shipbuilding effort. Museum, 809 South 8th St., Manitowoc WI 54220. M/ V American Republic, a 630 ', $30 million ore-carrying self-loader, launched during the summer, has already set a new single shipment tonnage record of 19,500 tons. Built by the Bay Shipbuilding Co. in Sturgeon Bay, Wisconsin, the vessel is equipped with twin controllable pitch propellers and her propulsion system included 8 rudders-4 flanking forward of the prop and 4 in the conventional position aft. GATX Corp., 120 Riverside Plaza, Chicago IL 60606. The 1911 steamship Chief Wawatam is reported to be "in fine fettle and busy," hauling cars across the Mackinac Straits between Lake Michigan and Lake Huron . USS Cairo, which served Union forces for 11 months from January to December, 1862, was sunk by a submerged Confederate torpedo mine in the Yazoo River near Vicksburg, Mississippi. Rediscovered in 1956, she is being restored and is to be the central focus of an interpretive complex located within the Vicksburg National Military Park. The complex includes a museum displaying artifacts from the boat and describing its history and a temporary restoration shop, which are already completed. Vicksburg N.M. Park, Vicksburg MS 39180. w

ROLF K.LEP: 1904-1981. An appreciation of Mr. Klep's life and work as founder of the Columbia River Maritime Museum is being written by Karl Kortum, Chairman of the National Society, for Sea History. ROGER ROBERTSON OLMSTED: 1928-1981. Of Mr. Olmsted, historian and leader in civic causes, who was at various times Curator of the San Francisco Maritime Museum and Curator of History at the Oakland Museum, editor of The American West, the California Historical Quarterly, the Sierra Club Bulletin, and Scenes of Wonder & Curiosity, and co-author with T.H. Watkins of books on San Francisco's hi story and architecture, the historian Richard Reinhardt had this to say: "Roger's commitment to history was that of an evangelist to his creed. He saw history as a vital force, deepening and enriching life and providing a bastion against foolishness and fanaticism." His colleague Tom Watkins said, in a tribute published in The American West: "Like Rafael Sabatini's Scaramouche, Roger was born with the gift of laughter and a sense that the world was mad . He never lost the gift of laughter, but unlike Scarmouche, who merely tried to survive in his world, Roger spent most of his adult life trying to improve his. He had the wit of a cynic but the hope of a romantic, and with an obsidian intelligence that cut through fat to the very bone of things he struggled to make people understand how

to get things right . .. "Beyond this, he spread his energies in any number of directions," Mr. Watkins notes, ''from threats to the environment to historic preservation to urban archaeology. All of this in a career that lasted less than thirty years. The man never had a bad idea-only impossible ones that frequently were made possible. He made the difference." PS