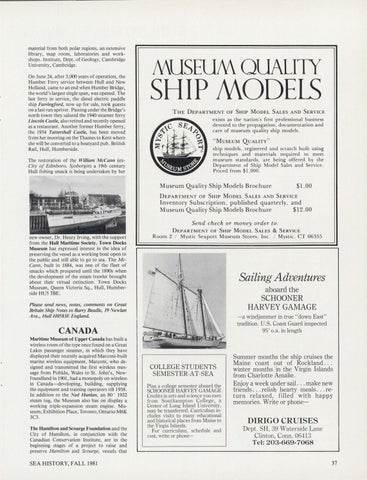 material from both polar regions, an extensive library, map room, laboratories and workshops. Institute, Dept. of Geology, Cambridge University, Cambridge. On June 24, after 3,000 years of operation, the Humber Ferry service between Hull and New Holland, came to an end when Humber Bridge, the world's largest single span, was opened. The last ferry in service, the diesel electric paddle ship Farringford, now up for sale, took guests on a last run upriver. Passing under the Bridge's north tower they sal uted the 1940 steamer ferry Lincoln Castle, also retired and recently opened as a restaurant. Another former Humber ferry, the 1934 Tattershall Castle, has been moved from her mooring on the Thames to Kent where she will be converted to a boatyard pub. British Rail, Hull, Humberside. The restoration of the William McCann (exCity of Edinboro, Sjoborgin) a 19th century Hull fishing smack is being undertaken by her

THE DEPARTMENT OF SHIP MODEL SALES AND SERVICE

ship models , registered and scratch built using techniques and materials required to meet museum standards, are being offered by the Department of Ship Model Sales and Service. Priced from $1, 000.

new owner, Dr. Henry Irving, with the support from the Hull Maritime Society. Town Docks Museum has expressed interest in the idea of preserving the vessel as a working boat open to the public and still able to go to sea. The Mccann, built in 1884, was one of the fleet of smacks which prospered until the 1890s when the development of the steam trawler brought about their virtual extinction. Town Docks Museum, Queen Victoria Sq., Hull, Humberside HU5 3BE.

Sailing Adventures aboard the

CANADA Maritime Museum of Upper Canada has built a wireless room of the type once found on a Great Lakes passenger steamer, in which they have displayed their recently acquired Marconi-built marine wireless equipment. Marconi, who designed and transmitted the first wireless message from Pohldu, Wales to St. John's, Newfoundland in 1901, had a monopoly on wireless in Canada-developing, building, supplying the equipment and training operators till 1938. In addition to the Ned Han/an, an 80 ' 1932 steam tug, the Museum also has on display a working triple-expansion steam engine. Museum, Exhibition Place, Toronto, Ontario M6K 3C3. The Hamilton and Scourge Foundation and the City of Hamilton, in conjunction with the Canadian Conservation Institute, are in the beginning stages of a project to raise and preserve Hamilton and Scourge, vessels that

COLLEGE STUDENTS SEMESTER-AT-SEA Plan a college semester aboard the SCHOONER HARVEY GAMAGE. Credits in arts and science you earn from Southampton College, a Center of Long Island University, may be transferred. Curriculum includes visits to many educational and historical places from Maine to the Virgin Islands. For curriculum, schedule and cost, write or phone-