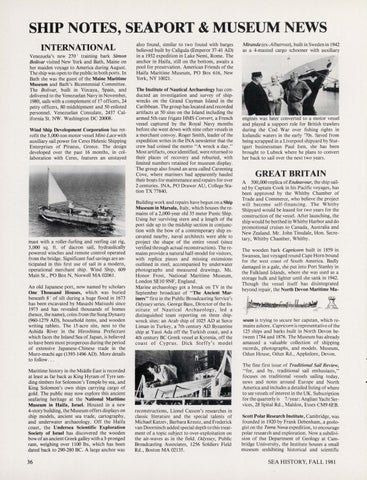 SHIP NOTES, SEAPORT &amp; MUSEUM NEWS INTERNATIONAL Venezuela&#39;s new 270&#39; training bark Simon Bolivar visited New York and Bath, Maine on her maiden voyage to America during August. The ship was open to the public in both ports. In Bath she was the guest of the Maine Maritime Museum and Bath&#39;s Bicentennial Committee. The Bolivar, built in Vizcaya, Spain, and delivered to the Venezuelan Navy in November, 1980, sails with a complement of 17 officers, 24 petty officers, 80 midshipment and 50 enlisted personnel. Venezuelan Consulate, 2437 California St. NW. Washington DC 20008 . Wind Ship Development Corporation has retrofit the 3,000-ton motor vessel Mini-Lace with auxi liary sail power for Ceres Helenic Shipping Enterprises of Piraeus, Greece. The design developed over the past 16 months, in collaboration with Ceres, features an unstayed

inast with a roller-furling and reefing cat rig, 3,000 sq. ft. of dacron sail, hydraulically powered winches and remote control operated from the bridge. Significant fuel savings are anticipated in this first use of sail in a modern, operational merchant ship. Wind Ship, 609 Main St., PO Box N, Norwell MA 02061. An old Japanese port, now named by scholars One Thousand Houses, which was buried beneath 8&#39; of silt during a huge flood in 1673 has been excavated by Masashi Matsushi since 1973 and has revealed thousands of homes (hence, the name), coins from the Sung Dynasty (960-1279 AD), household items, and wooden writing tablets. The 15-acre site, next to the Ashida River in the Hiroshima Prefecture which faces the Inland Sea of Japan, is believed to have been most prosperous during the period of extensive Japanese-Chinese trade in the Muro-machi age (1393-1496 AD). More details to follow ... Maritime history in the Middle East is recorded at least as far back as King Hyram of Tyre sending timbers for Solomon&#39;s Temple by sea, and King Solomon&#39;s own ships carrying cargo of gold. The public may now explore this ancient seafaring heritage at the National Maritime Museum in Haifa, Israel. Housed in a new 4-story building, the Museum offers displays on ship models, ancient sea trade, cartography, and underwater archaeology. Off the Haifa coast, the Undersea Scientific Exploration Society of Israel has discovered the wooden bow of an ancient Greek galley with a 3-pronged ram, weighing over 1100 lbs, which has been dated back to 290-280 BC. A large anchor was

also found, similar to two found with barges believed built by Caligula (Emperor 37-41 AD) in a 1932 expedition in Lake Nemi, Rome . The anchor in Haifa, still on the bottom, awaits a pool for preservation. American Friends of the Haifa Maritime Museum, PO Box 616, New York, NY 10021. The Institute of Nautical Archaeology has conducted an investigation and survey of shipwrecks on the Grand Cayman Island in the Caribbean. The group has located and recorded artifacts at 50 sites on the Island including the armed 5th-rate frigate HMS Convert, a French vessel captured by the Royal Navy months before she went down with nine other vessels in a merchant convoy. Roger Smith, leader of the expedition writes in the INA newsletter that the crew had coined the motto &quot;A wreck a day.&quot; Most artifacts, once identified, were returned to their places of recovery and reburied, with limited numbers retained for museum display. The group also found an area called Careening Cove, where mariners had apparently hauled their boats for maintenance and repairs for over 2 centuries. INA, PO Drawer AU, College Station TX 77840. Building work and repairs have begun on a Ship Museum in Marsala, Italy, which houses the remains of a 2,000-year old 35 meter Punic Ship. Using .her surviving stern and a length of the port side up to the midship section in conjunction with the bow of a contemporary ship excavated nearby, naval architects were able to project the shape of the entire vessel (since verified through actual reconstruction). The remains provide a natural half-model for visitors, with replica pieces and missing extensions outlined in steel, accompanied by underwater photographs and measured drawings. Ms. Honor Frost, National Maritime Museum, London SEIO 9NF, England. Marine archaeology got a break on TV in the September broadcast of &quot;The Ancient Mariners&quot; first in the Public Broadcasting Service&#39;s Odyssey series. George Bass, Director of the Institute of Nautical Archaeology , led a distinguished team reporting on three shipwreck sites: an Arab ship of 1025 AD at Serce Liman in Turkey, a 7th century AD Byzantine ship at Yassi Ada off the Turkish coast, and a 4th century BC Greek vessel at Kyrenia, off the coast of Cyprus. Dick Steffy&#39;s model

Miranda (ex-Albatross), built in Sweden in 1942 as a 4-masted cargo schooner with auxiliary

engines was lat.er converted to a motor vessel and played a support role for British trawlers during the Cod War over fi shing rights in Icelandic waters in the early &#39;70s. Saved from being scrapped in a Liverpool shipyard by Stuttgart businessman Paul !sen, she has been brought to Lubeck where he plans to convert her back to sail over the next two years.

GREAT BRITAIN A 500,000 replica of Endeavour, the ship sailed by Captain Cook in his Pacific voyages, has been approved by the Whitby Chamber of Trade and Commerce, who believe the project will become se lf-financing. The Whitby Shipyard would be leased for two years for the construction of the vessel. After launching, the ship would be berthed in Whitby Harbor and do promotional cruises to Canada, Australia and New Zealand. Mr. John Tinsdale, Hon . Secretary, Whitby Chamber, Whitby. The wooden bark Capricorn built in 1859 in Swansea, last voyaged round Cape Horn bound for the west coast of South America. Badly damaged in a gale, she put into Port Stanley in the Falkland Islands, where she was used as a storage hulk and lighter until she sank in 1942. Though the vessel itself has disintegrated beyond repair, the North Devon Maritime Mu-

seum is trying to secure her capstan, which remains ashore. Capricorn is representative of the 125 ships and barks built in North Devon between 1784 and 1876. The Museum has already amassed a valuable collection of shipping records, photographs, and models. Museum, Odun House, Odun Rd., Appledore, Devon.

The fine first issue of Traditional Sail Review, &quot;for, and by, traditional sail enthusiasts,&quot; focuses on traditional vessels sailing today, news and notes around Europe and North America and includes a detailed listing of where to see vessels of interest in the UK. Subscription for the quarterly is 7/ year: Anglian Yacht Services, 28 Spital Rd., Maldon, Essex CM9 6EB.

reconstructions, Lionel Casson&#39;s researches in classic literature and the special talents of Michael Katzev, Barbara Kreutz, and Frederick van Doorninch added special depth to this treatment of a topic subject to over-exploitation on the air-waves as in the field. Odyssey, Public Broadcasting Associates, 1256 Soldiers Field Rd., Boston MA 02135.

Scott Polar Research Institute, Cambridge, was founded in 1920 by Frank Debenham, a geologist on the Terra Nova expedition, to encourage polar reseatrch and exploration. Now a subdivision of th1e Department of Geology at Cambridge Uniiversity, the Institute houses a small museum eexhibiting historical and scientific