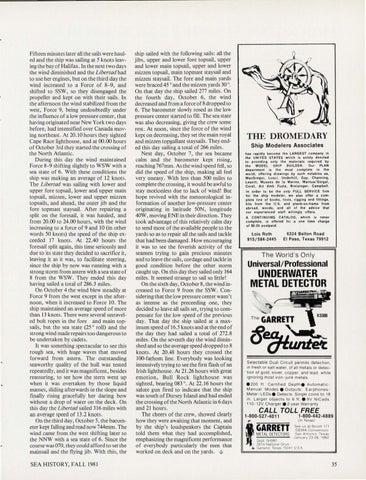 Fifteen minutes later all the sails were hauled and the ship was sailing at 5 knots leaving the bay of Halifax. In the next two days the wind diminished and the Libert ad had to use her engines, but on the third day the wind increased to a Force of 8-9, and shifted to SSW, so they disengaged the propeller and kept on with their sails. In the afternoon the wind stabilized from the west, Force 9, being undoubtedly under the influence of a low pressure center, that having originated near New York two days before, had intensified over Canada moving northeast. At 20. JO hours they sighted Cape Race lighthouse, and at 00.00 hours of October 3rd they started the crossing of the North Atlantic. During this day the wind maintained Force 8-9 shifting slightly to WSW with a sea state of 6. With these conditions the ship was making an average of 12 knots. The Libertad was sailing with lower and upper fore topsail, lower and upper main topsail, mizzen, lower and upper mizzen topsails, and ahead, the outer jib and the fore topmast staysail. After repairing a split on the foresail, it was hauled, and from 20.00 to 24.00 hours, with the wind increasing to a force of 9 and JO (in other words 50 knots) the speed of the ship exceeded 17 knots. At 22.40 hours the foresail split again, this time seriously and due to its state they decided to sacrifice it, leaving it as it was, to facilitate steering, since the ship by now was running with a strong storm from astern with a sea state of 8 from the WSW. They ended this day having sailed a total of 286.3 miles. On October 4 the wind blew steadily at Force 9 from the west except in the afternoon, when it increased to Force JO. The ship maintained an average speed of more than 13 knots. There were several unraveled bolt ropes in the fore and main topsails, but the sea state (25 ° roll) and the strong wind made repairs too dangerous to be undertaken by cadets. It was something spectacular to see this rough sea, with huge waves that moved forward from astern. The outstanding seaworthy quality of the hull was tested repeatedly, and it was magnificent, besides reassuring, to see how the stern went up when it was overtaken by those liquid masses, sliding afterwards in the slope and finally rising gracefully her daring bow without a drop of water on the deck. On this day the Libertad sailed 316 miles with an average speed of 13.2 knots. On the third day, October 5, the barometer kept falling and read now 744mm. The wind came from the west shifting later to the NNW with a sea state of 6. Since the course was 070, they could afford to set the mainsail and the flying jib. With this, the SEA HISTORY, FALL 1981

ship sailed with the following sails: all the jibs, upper and lower fore topsail, upper and lower main topsail, upper and lower mizzen topsail, main topmast staysail and mizzen staysail. The fore and main yards were braced 45 ° and the mizzen yards 30 °. On that day the ship sailed 277 miles . On the fourth day, October 6, the wind decreased and from a force of 8 dropped to 6. The barometer slowly rosed as the low pressure center started to fill. The sea state was also decreasing, giving the crew some rest. At noon, since the force of the wind kept on decreasing, they set the main royal and mizzen topgallant staysails. They ended this day sailing a total of 266 miles. Next day, October 7, the sea became calm and the barometer kept rising, reaching 767mm. As the wind speed fell, so did the speed of the ship, making all feel very uneasy. With less than 500 miles to complete the crossing, it would be awful to stay motionless due to lack of wind! But hope revived with the meteorological information of another low-pressure center originating in latitude SON, longitude 40W, moving ENE in their direction. They took advantage of this relatively calm day to send most of the available people to the yards so as to repair all the sails and tackle that had been damaged. How encouraging it was to see the feverish activity of the seamen trying to gain precious minutes and to leave the sails, cordage and tackle in good condition before the other storm caught up. On this day they sailed only 164 miles. It seemed strange to sail so little! On the sixth day, October 8, the wind increased to Force 9 from the SSW. Considering that the low pressure center wasn't as intense as the preceeding one, they decided to leave all sails set, trying to compensate for the low speed of the previous day. That day the ship sailed at a maximum speed of 16.5 knots and at the end of the day they had sailed a total of 272.8 miles. On the seventh day the wind diminshed and so the average speed dropped to 8 knots. At 20.48 hours they crossed the 100-fathom line. Everybody was looking intensively trying to see the first flash of an Irish lighthouse. At 21.26 hours with great emotion, Bull Rock lighthouse was sighted, bearing 083 °. At 22.16 hours the salute gun fired to indicate that the ship was south of Dursey Island and had ended the crossing of the North Atlantic in 6 days and 21 hours. The cheers of the crew, showed clearly how they were awaiting that moment, and by the ship's loudspeakers the Captain told them what they had accomplished, emphasizing the magnificent performance of everybody particularly the men that worked on deck and on the yards . w

THE DROMEDARY Ship Modelers Associates has rapidly become the LARGEST company in the UNITED STATES which is so lely devoted to providing only the materials required by the MODEL SHIP BUILDER . Our PLAN department is the most complete in the world, <.:>ftering drawings by such notables as, MacGregor, Lusc i, Underhill , Gay, Channing , Leavitt, Musees de la Marine , Mantua / Sergal ,

In order to be the only FULL SERVICE firm

for the ship modeler , we also offer a com· plete line of books, lools , rigging and fillings, kils from lhe U.S. and plank-on-frame from abroad , woods, and all of lhe advice that our experienced staff willi ngly offers. A CONTINUING CATALOG , which is never complete , is offered for a one lime charge of $6 .00 post pa id.

The World 's Only