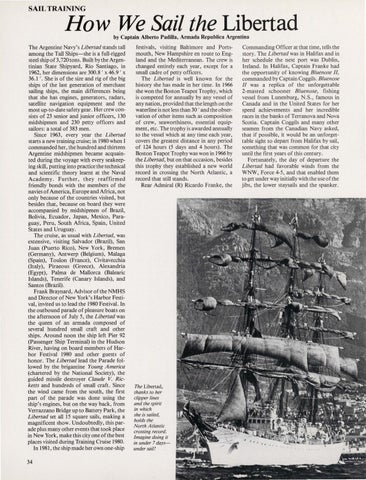 How We Sail the Libertad by Captain Alberto Padilla, Armada Republica Argentina

The Argentine Navy's Libertad stands tall among the Tall Ships-she is a full-rigged steel ship of 3,720tons. Built by the Argentinian State Shipyard, Rio Santiago, in 1962, her dimensions are 300.8' x 46.9 ' x 36.1 '. She is of the size and rig of the big ships of the last generation of merchant sailing ships, the main differences being that she has engines, generators, radars, satellite navigation equipment and the most up-to-date safety gear. I-ier crew consists of 23 senior and junior officers, 130 midshipmen and 230 petty officers and sailors: a total of 383 men . Since 1963, every year the Libertad starts a new training cruise; in 1980 when I commanded her, the hundred and thirteen Argentine midshipmen became acquainted during the voyage with every seakeeping skill, putting into practice the technical and scientific theory learnt at the Naval Academy. Further, they reaffirmed friendly bonds with the members of the navies of America, Europe and Africa, not only because of the countries visited, but besides that, because on board they were accompanied by midshipmen of Brazil, Bolivia, Ecuador, Japan, Mexico, Paraguay, Peru, South Africa, Spain, United States and Uruguay. The cruise, as usual with Libertad, was extensive, visiting Salvador (Brazil), San Juan (Puerto Rico), New York, Bremen (Germany), Antwerp (Belgium), Malaga (Spain), Toulon (France), Civitavecchia (Italy), Piraeous (Greece), Alexandria (Egypt), Palma de Mallorca (Balearic Islands), Tenerife (Canary Islands), and Santos (Brazil). Frank Braynard, Advisor of the NMHS and Director of New York's Harbor Festival, invited us to lead the 1980 Festival. In the outbound parade of pleasure boats on the afternoon of July 5, the Libertad was the queen of an armada composed of several hundred small craft and other ships. Around noon the ship left Pier 92 (Passenger Ship Terminal) in the Hudson River, having on board members of Harbor Festival 1980 and other guests of honor. The Libertad lead the Parade followed by the brigantine Young America (chartered by the National Society), the guided missile destroyer Claude V. Ricketts and hundreds of small craft. Since the wind came from the south, the first part of the parade was done using the ship's engines, but on the way back, from Verrazzano Bridge up to Battery Park, the Libertad set all 15 square sails, making a magnificent show. Undoubtedly, this parade plus many other events that took place in New York, make this city one of the best places visited during Training Cruise 1980. In 1981, theshipmadeherownone-ship 34

festivals, visiting Baltimore and Portsmouth, New Hampshire en route to England and the Mediterranean. The crew is changed entirely each year, except for a small cadre of petty officers. The Libertad is well known for the history she has made in her time. In 1966 she won the Boston Teapot Trophy, which is competed for annually by any vessel of any nation , provided that the length on the waterline is not less than 30 ' and the observation of other items such as composition of crew, seaworthiness, essential equipment, etc. The trophy is awarded annually to the vessel which at any time each year, covers the greatest distance in any period of 124 hours (5 days and 4 hours). The Boston Teapot Trophy was won in 1966 by the Libertad, but on that occasion, besides this trophy they established a new world record in crossing the North Atlantic, a record that still stands. Rear Admiral (R) Ricardo Franke, the

The Libertad, thanks to her clipper lines and the spirit in which she is sailed, holds the North Atlantic crossing record. Imagine doing it in under 7 daysunder sail!

Commanding Officer at that time, tells the story. The Libertad was in Halifax and in her schedule the next port was Dublin, Ireland . In Halifax, Captain Franke had the opportunity of knowing Bluenose fl, commanded by Captain Coggils. Bluenose fl was a replica of the unforgettable 2-masted schooner Bluenose, fishing vessel from Lunenburg, N.S., famous in Canada and in the United States for her speed achievements and her incredible races in the banks of Terranova and Nova Scotia. Captain Coggils and many other seamen from the Canadian Navy asked, that if possible, it would be an unforgettable sight to depart from Halifax by sail, something that was common for that city until the first years of this century. Fortunately, the day of departure the Libertad had favorable winds from the WNW, Force 4-5, and that enabled them to get under way initially with the use of the jibs, the lower staysails and the spanker.