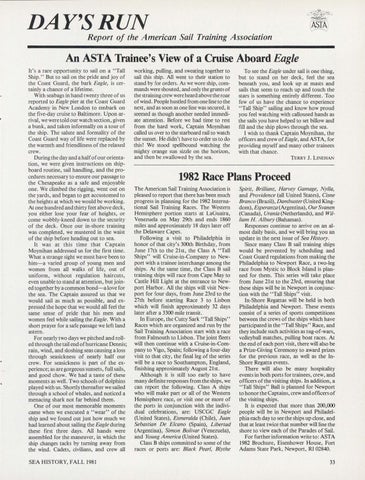 An ASTA Trainee&#39;s View of a Cruise Aboard Eagle It&#39;s a rare opportunity to sail on a &quot;Tall Ship.&quot; But to sail on the pride and joy of the Coast Guard, the bark Eagle, is certainly a chance of a lifetime. With seabags in hand twenty three of us reported to Eagle pier at the Coast Guard Academy in New London to embark on the five-day cruise to Baltimore. Upon arrival, we were told our watch section, given a bunk, and taken informally on a tour of the ship. The salute and formality of the Coast Guard way of life were replaced by the warmth and friendliness of the relaxed crew. During the day and a half of our orientation, we were given instructions on shipboard routine, sail handling, and the procedures necessary to ensure our passage to the Chesapeake as a safe and enjoyable one. We climbed the rigging, went out on the yards, and began to get accustomed to the heights at which we would be working. At one hundred and thirty feet above deck, you either lose your fear of heights, or come wobbly-kneed down to the security of the deck. Once our in-shore training was completed, we mustered in the waist of the ship before heading out to sea. It was at this time that Captain Moynihan addressed us for the first time. What a strange sight we must have been to him-a varied group of young men and women from all walks of life, out of uniform, without regulation haircuts, even unable to stand at attention, but joined together by a common bond-a love for the sea. The Captain assured us that we would sail as much as possible, and expressed the hope that we would all feel the same sense of pride that his men and women feel while sailing the Eagle. With a short prayer for a safe passage we left land astern. For nearly two days we pitched and rolled through the tail end of hurricane Dennis; rain, wind, and sloshing seas causing a loss through seasickness of nearly half our crew. For seasickness is part of the experience; as are gorgeous sunsets, full sails, and good chow. We had a taste of these moments as well. Two schools of dolphins played with us. Shortly thereafter we sailed through a school of whales, and noticed a menacing shark not far behind them. One of our most memorable moments came when we executed a &quot;wear&quot; of the ship and we found out just how much we had learned about sailing the Eagle during these first three days. All hands were assembled for the maneuver, in which the ship changes tacks by turning away from the wind. Cadets, civilians, and crew all SEA HISTORY, FALL 1981

working, pulling, and sweating together to sail this ship. All went to their station to stand by for orders. As we wore ship, commands were shouted, and only the grunts of the straining crew were heard above the roar of wind. People hustled from one line to the next, and as soon as one line was secured, it seemed as though another needed immediate attention . Before we had time to rest from the hard work, Captain Moynihan called us over to the starboard rail to watch the sunset. He didn&#39;t have to order us to do this! We stood spellbound watching the mighty orange sun sizzle on the horizon, and then be swallowed by the sea.

To see the Eagle under sail is one thing, but to stand on her deck, feel the sea beneath you, and look up at masts and sails that seem to reach up and touch the stars is something entirely different. Too few of us have the chance to experience &quot;Tall Ship&quot; sailing and know how proud you feel watching with calloused hands as the sails you have helped to set billow and fill and the ship plows through the sea. I wish to thank Captain Moynihan, the officers and crew of Eagle, and ASTA, for providing myself and many other trainees with that chance. TERRY J. LINEHAN

1982 Race Plans Proceed The American Sail Training Association is pleased to report that there has been much progress in planning for the 1982 International Sail Training Races. The Western Hemisphere portion starts at LaGuaira, Venezuela on May 29th and ends 1860 miles and approximately 18 days later off the Delaware Capes. Following a visit to Philadelphia in honor of that city&#39;s 300th Birthday, from June 17th to the 21st, the Class A &quot;Tall Ships&quot; will Cruise-in-Company to Newport with a trainee interchange among the ships. At the same time, the Class B sail training ships will race from Cape May to Castle Hill Light at the entrance to Newport Harbor. All the ships will visit Newport for four days, from June 23rd to the 27th before starting Race 3 to Lisbon which will finish approximately 32 days later after a 3300 mile transit. In Europe, the Cutty Sark &quot;Tall Ships&quot; Races which are organized and run by the Sail Training Association start with a race from Falmouth to Lisbon. The joint fleets will then continue with a Cruise-in-Company to Vigo, Spain; following a four-day visit to that city, the final leg of the series will be a race to Southampton, England, finishing approximately August 21st. Although it is still too early to have many definite responses from the ships, we can report the following. Class A ships who will make part or all of the Western Hemisphere race, or visit one or more of the ports in conjunction with the individual celebrations, are: USCGC Eagle (United States), Esmeralda (Chile), Juan Sebastian De Elcano (Spain), Libertad (Argentina), Simon Bolivar (Venezuela), and Young America (United States). Class B ships committed to some of the races or ports are: Black Pearl, Blythe

Spirit, Brilliant, Harvey Gamage, Ny/la, and Providence (all United States), Cisne Branco (Brazil), Dambuster (United Kingdom), Esperanza (Argentina), Our Svanen (Canada), Urania (Netherlands), and William H. Albury (Bahamas). Responses continue to arrive on an almost daily basis, and we will bring you an update in the next issue of Sea History. Since many Class B sail training ships would be prevented by scheduling and Coast Guard regulations from making the Philadelphia to Newport Race, a two-leg race from Mystic to Block Island is planned for them. This series will take place from June 21st to the 23rd, ensuring that these ships will be in Newport in conjunction with the &quot;Tall Ships&quot; visit. In-Shore Regattas will be held in both Philadelphia and Newport. These events consist of a series of sports competitions between the crews of the ships which have participated in the &quot;Tall Ships&quot; Race, and they include such activities as tug-of-wars, volleyball matches, pulling boat races. At the end of each port visit, there will also be a Prize-Giving Ceremony to award prizes for the previous race, as well as the InShore Regatta events. There will also be many hospitality events in both ports for trainees, crew, and officers of the visiting ships . In addition, a &quot;Tall Ships&quot; Ball is planned for Newport to honor the Captains, crew and officers of the visiting ships. It is expected that more than 200,000 people will be in Newport and Philadelphia each day to see the ships up close, and that at least twice that number will line the shore to view each of the Parades of Sail. For further information write to: ASTA 1982 Brochure, Eisenhower House, Fort Adams State Park, Newport, RI 02840. 33