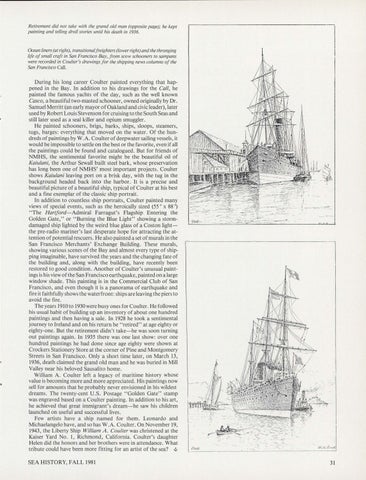 Retirement did not take with the grand old man (opposite page); he kept painting and telling droll stories until his death in 1936.

Ocean liners (al right), transitionalfreighters (lower right) and the thronging life of small craft in San Francisco Bay, from scow schooners to sampans were recorded in Coulter's drawings for the shipping news columns of the San Francisco Call.

During his long career Coulter painted everything that happened in the Bay. In addition to his drawings for the Call, he painted the famous yachts of the day, such as the well known Casco, a beautiful two-masted schooner, owned originally by Dr. Samuel Merritt (an early mayor of Oakland and civic leader), later used by Robert Louis Stevenson for cruising to the South Seas and still later used as a seal killer and opium smuggler. He painted schooners, brigs, barks, ships, sloops, steamers, tugs, barges: everything that moved on the water. Of the hundreds of paintings by W .A. Coulter of deepwater sailing vessels, it would be impossible to settle on the best or the favorite, even if all the paintings could be found and catalogued. But for friends of NMHS, the sentimental favorite might be the beautiful oil of Kaiulani, the Arthur Sewall built steel bark, whose preservation has long been one of NMHS' most important projects. Coulter shows Kaiulani leaving port on a brisk day, with the tug in the background headed back into the harbor. It is a precise and beautiful picture of a beautiful ship, typical of Coulter at his best and a fine exemplar of the classic ship portrait. In addition to countless ship portraits, Coulter painted many views of special events, such as the heroically sized (55 " x 88 ') "The Hartford-Admiral Farragut's Flagship Entering the Golden Gate," or "Burning the Blue Light" showing a stormdamaged ship lighted by the weird blue glass of a Coston lightthe pre-radio mariner's last desperate hope for attracting the attention of potential rescuers. He also painted a set of murals in the San Francisco Merchants' Exchange Building. These murals, showing various scenes of the Bay and almost every type of shipping imaginable, have survived the years and the changing fate of the building and, along with the building, have recently been restored to good condition. Another of Coulter's unusual paintings is his view of the San Francisco earthquake, painted on a large window shade. This painting is in the Commercial Club of San Francisco, and even though it is a panorama of earthquake and fire it faithfully shows the waterfront: ships are leaving the piers to avoid the fire. The years 1910 to 1930 were busy ones for Coulter. He followed his usual habit of building up an inventory of about one hundred paintings and then having a sale. In 1928 he took a sentimental journey to Ireland and on his return he "retired" at age eighty or eighty-one. But the retirement didn't take-he was soon turning out paintings again. In 1935 there was one last show: over one hundred paintings he had done since age eighty were shown at Crackers Stationery Store at the corner of Pine and Montgomery Streets in San Francisco. Only a short time later, on March 13, 1936, death claimed the grand old man and he was buried in Mill Valley near his beloved Sausalito home. William A. Coulter left a legacy of maritime history whose value is becoming more and more appreciated. His paintings now sell for amounts that he probably never envisioned in his wildest dreams . The twenty-cent U.S. Postage "Golden Gate" stamp was engraved based on a Coulter painting. In addition to his art, he achieved that great immigrant's dream-he saw his children launched on useful and successful lives. Few artists have a ship named for them . Leonardo and Michaelangelo have, and so has W.A. Coulter. On November 19, 1943, the Liberty Ship William A . Coulter was christened at the Kaiser Yard No. 1, Richmond, California. Coulter's daughter Helen did the honors and her brothers were in attendance. What tribute could have been more fitting for an artist of the sea? .V SEA HISTORY, FALL 1981