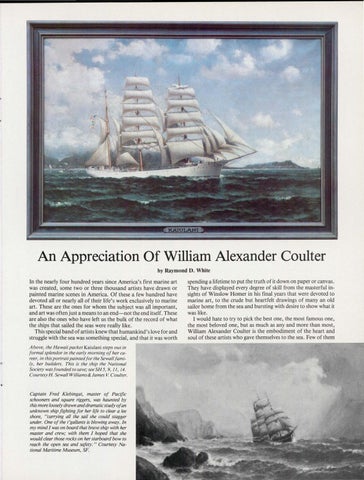 An Appreciation Of William Alexander Coulter by Raymond D. White

In the nearly four hundred years since America's first marine art was created, some two or three thousand artists have drawn or painted marine scenes in America. Of these a few hundred have devoted all or nearly all of their life's work exclusively to marine art. These are the ones for whom the subject was all important, and art was often just a means to an end-not the end itself. These are also the ones who have left us the bulk of the record of what the ships that sailed the seas were really like. This special band of artists knew that humankind's love for and struggle with the sea was something special, and that it was worth Above, the Hawaii packet Kaiulani steps out in formal splendor in the early morning of her career, in this portrait painted for the Sewall family, her builders. This is the ship the National Society was founded to save; see SH 5, 9, I I, 14. Courtesy H. Sewall Williams& James V. Coulter.

Captain Fred Klebingat, master of Pacific schooners and square riggers, was haunted by this more loosely drawn and dramatic study ofan unknown ship fighting for her life to clear a lee shore, "carrying all the sail she could stagger under. One of the t'ga//ants is blowing away. In my mind I was on board that brave ship with her master and crew; with them I hoped that she would clear those rocks on her starboard bow to reach the open sea and safety." Courtesy National Maritime Museum, SF.

spending a lifetime to put the truth of it down on paper or canvas. They have displayed every degree of skill from the masterful insights of Winslow Homer in his final years that were devoted to marine art, to the crude but heartfelt drawings of many an old sailor home from the sea and bursting with desire to show what it was like. I would hate to try to pick the best one, the most famous one, the most beloved one, but as much as any and more than most, William Alexander Coulter is the embodiment of the heart and soul of these artists who gave themselves to the sea. Few of them