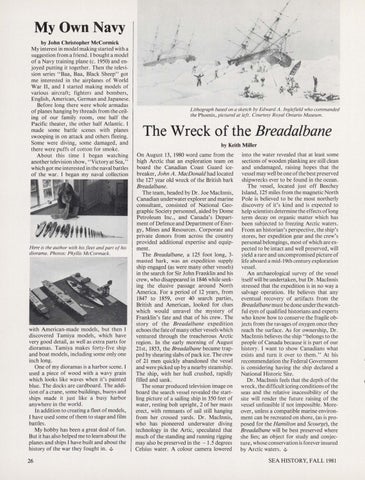 My Own Navy by John Christopher McCormick

My interest in model making started with a suggestion from a friend. I bought a model of a Navy training plane (c. I 950) and enjoyed putting it together. Then the television series "Baa, Baa, Black Sheep" got me interested in the airplanes of World War II, and I started making models of various aircraft; fighters and bombers, English, American, German and Japanese. Before long there were whole armadas of planes hanging by threads from the ceiling of our family room, one half the Pacific theater, the other half Atlantic. I made some battle scenes with planes swooping in on attack and others fleeing. Some were diving, some damaged, and there were puffs of cotton for smoke. About this time I began watching another television show, ''Victory at Sea,'' which got me interested in the naval battles of the war. I began my naval collection

Here is the author with his fleet and part of his diorama. Photos: Phyllis McCormack.

with American-made models, but then I discovered Tamiya models, which have very good detail , as well as extra parts for dioramas. Tamiya makes forty-five ship and boat models, including some only one inch long . One of my dioramas is a harbor scene. I used a piece of wood with a wavy grain which looks like waves when it's painted blue. The docks are cardboard. The addition of a crane, some buildings, buoys and ships made it just like a busy harbor anywhere in the world. Jn addition to creating a fleet of models, I have used some of them to stage and film battles. My hobby has been a great deal of fun . But it has also helped me to learn about the planes and ships I have built and about the history of the war they fought in . .t 26

Lithograph based on a sketch by Edward A . lnglefield who commanded the Phoenix, pictured at left. Courtesy Royal Ontario Museum.

The Wreck of the Breadalbane by Keith Miller

On August 13, 1980 word came from the high Arctic that an exploration team on board the Canadian Coast Guard icebreaker, John A. MacDonald had located the 127 year old wreck of the British bark Breadalbane. The team, headed by Dr. Joe Maclnnis, Canadian underwater explorer and marine consultant, consisted of National Geographic Society personnel, aided by Dome Petroleum Inc., and Canada's Department of Defence and Department of Energy, Mines and Resources. Corporate and private donors from across the country provided additional expertise and equipment. The Breadalbane, a 125 foot long, 3masted bark , was an expedition supply ship engaged (as were many other vessels) in the search for Sir John Franklin and his crew, who disappeared in 1846 while seeking the elusive passage around North America. For a period of 12 years, from 1847 to 1859, over 40 search parties, British and American, looked for clues which would unravel the mystery of Franklin's fate and that of his crew. The story of the Breadalbane expedition echoes the fate of many other vessels which ventured through the treacherous Arctic region. In the early morning of August 21st, 1853, the Breadalbane became trapped by shearing slabs of pack ice. The crew of 21 men quickly abandoned the vessel and were picked up by a nearby steamship. The ship, with her hull crushed, rapidly filled and sank. The sonar produced television image on board the search vessel revealed the startling picture of a sailing ship in 350 feet of water, resting bolt upright, 2 of her masts erect, with remnants of sail still hanging from her crossed yards. Dr. Maclnnis, who has pioneered underwater diving technology in the Artie, speculated that much of the standing and running rigging may also be preserved in the - 1.5 degrees Celsius water. A colour camera lowered

into the water revealed that at least some sections of wooden planking are still clean and undamaged, raising hopes that the vessel may well be one of the best preserved shipwrecks ever to be found in the ocean. The vessel, located just off Beechey Island, 125 miles from the magnetic North Pole is believed to be the most northerly discovery of it's kind and is expected to help scientists determine the effects oflong term decay on organic matter which has been subjected to freezing Arctic waters. From an historian' s perspective, the ship's stores, her expedition gear and the crew's personal belongings, most of which are expected to be intact and well preserved, will yield a rare and uncompromised picture of life aboard a mid-19th century exploration vessel. An archaeological survey of the vessel itself will be undertaken, but Dr. Maclnnis stressed that the expedition is in no way a salvage operation. He believes that any eventual recovery of artifacts from the Breadalbane must be done under the watchful eyes of qualified historians and experts who know how to conserve the fragile objects from the ravages of oxygen once they reach the surface. As for ownership, Dr. Maclnnis believes the ship "belongs to the people of Canada because it is part of our history. I want to show Canadians what exists and turn it over to them." At his recommendation the Federal Government is considering having the ship declared a National Historic Site. Dr. Maclnnis feels that the depth of the wreck, the difficult iceing conditions of the seas and the relative inacessibility of the site will render the future raising of the vessel unfeasible if not impossible. Moreover, unless a compatible marine environment can be recreated on shore, (as is proposed for the Hamilton and Scourge), the Breadalbane will be best preserved where she lies; an object for study and conjecture, whose conservation is forever insured by Arctic waters. J, SEA HISTORY, FALL 1981