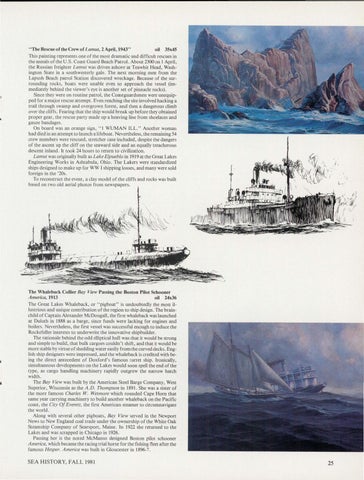 &quot;The Rescue of the Crew of lamut, 2 April, 1943&quot; oil 3Sx45 This painting represents one of the most dramatic and difficult rescues in the annals of the U.S. Coast Guard Beach Patrol. About 2300 on I April, the Russian freighter LamUI was driven ashore at Teawhit Head, Washington State in a southwesterly gale. The next morning men from the Lapush Beach patrol Station discovered wreckage. Because of the surrounding rocks, boats were unable even to approach the vessel (immediately behind the viewer&#39;s eye is another set of pinnacle rocks). Since they were on routine patrol, the Coastguardsmen were unequipped for a major rescue attempt. Even reaching the site involved hacking a trail through swamp and overgrown forest, and then a dangerous climb over the cliffs. Fearing that the ship would break up before they obtained proper gear, the rescue party made up a heaving line from shoelaces and gauze bandages. On board was an orange sign, &quot;l WUMAN ILL.&quot; Another woman had died in an attempt to launch a lifeboat. Nevertheless, the remaining 54 crew members were rescued, stretcher case included, despite the dangers of the ascent up the cliff on the seaward side and an equally treacherous descent inland. It took 24 hours to return to civilization. lamut was originally built as Lake Elpueblo in 1919 at the Great Lakes Engineering Works in Ashtabula, Ohio. The Lakers were standardized ships designed to make up for WW I shipping losses, and many were sold foreign in the &#39;20s. To reconstruct the event, a clay model of the cliffs and rocks was built based on two old aerial photos from newspapers.

The Whaleback Collier Bay View Passing the Boston Pilot Schooner America, 1913 oil 24x36 The Great Lakes Whaleback, or &quot;pigboat&quot; is undoubtedly the most illustrious and unique contribution of the region to ship design. The brainchild of Captain Alexander McDougall, the first whaleback was launched at Duluth in 1888 as a barge, since funds were lacking for engines and boilers. Nevertheless, the first vessel was successful enough to induce the Rockefeller interests to underwrite the innovative shipbuilder. The rationale behind the odd elliptical hull was that it would be strong and simple to build, that bulk cargoes couldn&#39;t shift, and that it would be more stable by virtue of shedding water easily from the curved decks. English ship designers were impressed, and the whaleback is credited with being the direct antecedent of Doxford&#39;s famous turret ship. Ironically, simultaneous developments on the Lakes would soon spell the end of the type, as cargo handling machinery rapidly outgrew the narrow hatch width. The Bay View was built by the American Steel Barge Company, West Superior, Wisconsin as the A.D. Thompson in 1891. She was a sister of the more famous Charles W. Wetmore which rounded Cape Horn that same year carrying machinery to build another whaleback on the Pacific coast, the City Of Everett, the first American steamer to circumnavigate the world. Along with several other pigboats, Bay View served in the Newport News to New England coal trade under the ownership of the White Oak Steamship Company of Searsport, Maine. In 1922 she returned to the Lakes and was scrapped in Chicago in 1926. Passing her is the noted McManus designed Boston pilot schooner America, which became the racing trial horse for the fishing fleet after the famous Hesper. America was built in Gloucester in 1896-7.