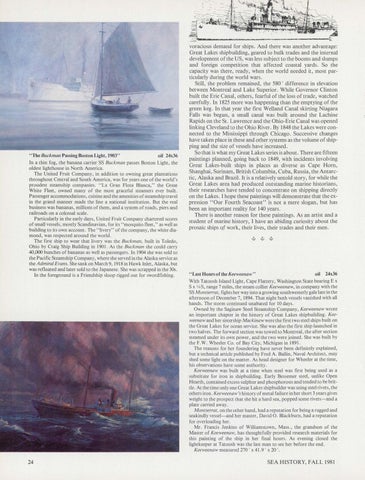 &quot;The Buckman Passing Boston Light, 1903&quot; oil 24x36 In a thin fog, the banana carrier SS Buckman passes Boston Light, the oldest lighthouse in North America. The United Fruit Company, in addition to owning great plantations throughout Central and South America, was for years one of the world&#39;s proudest steamship companies. &quot;La Gran Flota Blanca,&quot; the Great White Fleet, owned many of the most graceful steamers ever built. Passenger accommodations, cuisine and the amenities of steamship travel in the grand manner made the line a national institution. But the real business was bananas, millions of them, and a system of roads, piers and railroads on a colossal scale. Particularly in the early days, United Fruit Company chartered scores of small vessels, mostly Scandinavian, for its &quot; mosq uito fleet,&quot; as well as building to its own account. Th e &quot;livery&quot; of the company, the white diamond, was respected around the world. The first ship to wear that livery was the Buckman, built in Toledo, Ohio by Craig Ship Building in 1901. As the Buckman she could carry 40,000 bunches of bananas as well as passengers. In 1904 she was sold to the Pacific Steamship Company, where she served in the Alaska service as the Admiral Evans. She sank on March 9, 1918 in Hawk Inlet, Alaska, but was refloated and later sold to the Japanese. She was scrapped in the 30s. In the foreground is a Friendship sloop rigged out for swordfishing.

voracious demand for ships. And there was another advantage: Great Lakes shipbuilding, geared to bulk trades and the internal development of the US, was less subject to the booms and slumps and foreign competition that affected coastal yards. So the capacity was there, ready, when the world needed it, most particularly during the world wars. Still, the problem remained, the 580&#39; difference in elevation between Montreal and Lake Superior. While Governor Clinton built the Erie Canal, others, fearful of the loss of trade, watched carefully. In 1825 more was happening than the emptying of the green keg. In that year the first Welland Canal skirting Niagara Falls was begun, a small canal was built around the Lachine Rapids on the St. Lawrence and the Ohio-Erie Canal was opened linking Cleveland to the Ohio River. By 1848 the Lakes were connected to the Mississippi through Chicago. Successive changes have taken place in these and other systems as the volume of shipping and the size of vessels have increased. So that is what my Great Lakes series is about. There are fifteen paintings planned, going back to 1849, with incidents involving Great Lakes-built ships in places as diverse as Cape Horn, Shanghai, Surinam, British Columbia, Cuba, Russia, the Antarctic, Alaska and Brazil. It is a relatively untold story, for while the Great Lakes area had produced outstanding marine historians, their researches have tended to concentrate on shipping directly on the Lakes. I hope these paintings will demonstrate that the expression &quot;Our Fourth Seacoast&quot; is not a mere slogan, but has been an important reality for 140 years. There is another reason for these paintings. As an artist and a student of marine history, I have an abiding curiosity about the prosaic ships Qf work, their lives, their trades and their men .

&quot;Last Hours of the Keeweenaw&quot; oil 24x36 With Tatoosh Island Light, Cape Flattery, Washington State bearing Ex S x &#39;I.IS, range 7 miles, the steam collier Keeweenaw, in company with the SS Montserrat, fights her way into a growing southwesterly gale late in the afternoon of December 7, 1894. That night both vessels vanished with all hands. The storm continued unabated for 10 days. Owned by the Saginaw Steel Steamship Company, Keeweenaw wrote an important chapter in the history of Great Lakes shipbuilding. Keeweenaw and her sistership Mackinaw were the first two steel ships built on the Great Lakes for ocean service. She was also the first ship launched in two halves. The forward section was towed to Montreal, the after section steamed under its own power, and the two were joined . She was built by the F.W. Wheeler Co. of Bay City, Michigan in 1891. The reasons for her foundering have never been definitely explained, but a technical article published by Fred A. Ballin, Naval Architect, may shed some light on the matter. As head designer for Wheeler at the time, his observations have some authority. Keeweenaw was built at a time when steel was first being used as a substitute for iron in shipbuilding. Early Bessemer steel, unlike Open Hearth, contained excess sulphur and phosphorous and tended to be brittle. At the time only one Great Lakes shipbuilder was using steel rivets, the others iron . Keeweenaw&#39;s history of metal failure in her short 3 years gives weight to the prospect that she hit a hard sea, popped some rivets-and a plate carried away. Montserrat, on the other hand, had a reputation for being a rugged and seakindly vessel-and her master, David 0. Blackburn, had a reputation for overloading her. Mr. Francis Jenkins of William stown, Mass., the grandson of the Master of Keeweenaw, has thoughtfully provided research materials for this painting of the ship in her final hours. As evening closed the lightkeeper at Tatoosh was the last man to see her before the end. Keeweenaw measured 270 &#39; x 41. 9 &#39; x 20 &#39;.