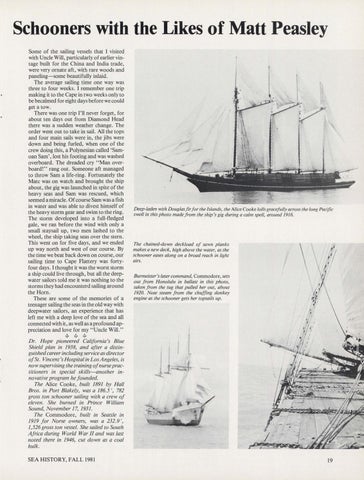 Schooners with the Likes of Matt Peasley Some of the sailing vessels that I visited with Uncle Will, particularly of earlier vintage built for the China and India trade, were very ornate aft, with rare woods and paneling-some beautifully inlaid. The average sailing time one way was three to four weeks. I remember one trip making it to the Cape in two weeks only to be.becalmed for eight days before we could get a tow. There was one trip I&#39;ll never forget, for about ten days out from Diamond Head there was a sudden weather change. The order went out to take in sail. All the tops and four main sails were in, the jibs were down and being furled, when one of the crew doing this, a Polynesian called &#39;Samoan Sam&#39;, lost his footing and was washed overboard. The dreaded cry &quot;Man overboard!&quot; rang out. Someone aft managed to throw Sam a life-ring. Fortunately the Mate was on watch and brought the ship about, the gig was launched in spite of the heavy seas and Sam was rescued, which seemed a miracle. Of course Sam was a fish in water and was able to divest himself of the heavy storm gear and swim to the ring. The storm developed into a full-fledged gale, we ran before the wind with only a . small staysail up, two men lashed to the wheel, the ship taking seas over the stern. This went on for five days, and we ended up way north and west of our course. By the time we beat back down on course, our sailing time to Cape F1attery was fortyfour days. I thought it was the worst storm a ship could live through, but all the deepwater sailors told me it was nothing to the storms they had encounterd sailing around the Horn. These are some of the memories of a teenager sailing the seas in the old way with deepwater sailors, an experience that has left me with a deep love of the sea and all connected with it, as well as a profound appreciation and love for my &quot;Uncle Will.&quot; J,

Deep-laden with Douglas fir for the Islands, the Alice Cooke lolls gracefully across the long Pacific swell in this photo made from the ship&#39;s gig during a calm spell, around 1916.

The chained-down deckload of sawn planks makes a new deck, high above the water, as the schooner eases along on a broad reach in light airs. Burmeister&#39;s later command, Commodore, sets out from Honolulu in ballast in this photo, taken from the tug that pulled her out, about 1920. Note steam from the chuffing donkey engine as the schooner gets her topsails up.

Dr. Hope pioneered California&#39;s Blue Shield plan in 1938, and after a distinguished career including service as director of St. Vincent&#39;sHospitalinLosAngeles, is now supervising the training ofnurse practitioners in special skills-another innovative program he founded. The Alice Cooke, built 1891 by Hall Bros. in Port Blakely, was a 186.5 &#39;, 782 gross ton schooner sailing with a crew of eleven. She burned in Prince William Sound, November 17, 1931. The Commodore, built in Seattle in 1919 for Norse owners, was a 232.9 &#39;, 1,526 gross ton vessel. She sailed to South AfricaÂˇduring World War II and was last noted there in 1946, cut down as a coal hulk. SEA HISTORY, FALL 1981