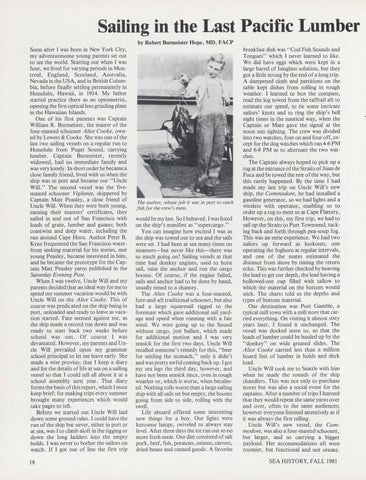 Soon after I was born in New York City, my adventuresome young parents set out to see the world. Starting out when I was four, we lived for varying periods in Montreal, England, Scotland , Australia, Nevada in the USA, and in British Columbia, before finally settling permanently in Honolulu, Hawaii, in 1914. My father started practice there as an optometrist, opening the first optical lens grinding plant in the Hawaiian Islands. One of his first patients was Captain William R. Burmeister, the master of the four-masted schooner Alice Cooke, owned by Lewers &amp; Cooke. She was one of the last two sailing vessels on a regular run to Honolulu from Puget Sound, carrying lumber. Captain Burmeister, recently widowed, had no immediate family and was very lonely. In short order he became a close family friend, lived with us when the ship was in port and became our &quot;Uncle Will.&quot; The second vessel was the fivemasted schooner Vigilante, skippered by Captain Matt Peasley, a close friend of Uncle Will. When they were both young, earning their masters&#39; certificates, they sailed in and out of San Francisco with loads of grain, lumber and guano; both coastwise and deep water, including the run around Cape Horn. Author Peter B. Kyne frequented the San Francisco waterfront seeking material for his stories, met young Peasley, became interested in him, and he became the prototype for the Captain Matt Peasley yarns published in the Saturday Evening Post. When I was twelve, Uncle Will and my parents decided that an ideal way for me to spend my summer vacation would be with Uncle Will on the Alice Cooke. This of course was predicated on the ship being in port, unloaded and ready to leave as vacation started. Fate seemed against me, as the ship made a record run down and was ready to start back two weeks before school was out. Of course I was devastated. However, my parents and Uncle Will prevailed upon my grammar school principal to let me leave early. She made a wise proviso; that I keep a diary and list the details of life at sea on a sailing vessel so that I could tell all about it at a school assembly next year. That diary forms the basis of this report, which I must keep brief; for making trips every summer brought many experiences which would take pages to tell. Before we started out Uncle Will laid down some ground rules. I could have the run of the ship but never, either in port or at sea, was I to climb aloft in the rigging or down the long ladders into the empty holds. I was never to bother the sailors on watch . If I got out of line the first trip 18

The author, whose job it was in port to catch fish for the crew&#39;s mess.

would be my last. So I behaved . I was listed on the ship&#39;s manifest as &quot;supercargo.&quot; You can imagine how excited I was as the ship was towed out to sea and the sails were set. I had been at sea many times on steamers-but never like this-there was so much going on! Sailing vessels at that time had donkey engines, used to hoist sail, raise the anchor and run the cargo booms. Of course, if the engine failed, sails and anchor had to be done by hand, usually timed to a chantey. The Alice Cooke was a four-masted, fore-and-aft traditional schooner, but also had a large squaresail rigged to the foremast which gave additional sail yardage and speed when running with a fair wind. We were going up to the Sound without cargo , just ballast, which made for additional motion and I was very seasick for the first two days. Uncle Will recalled someone&#39;s remedy for this, &quot;beer for settling the stomach,&quot; only it didn&#39;t and was pretty awful coming back up. I got my sea legs the third day, however, and have not been seasick since, even in rough weather or, which is worse, when becalmed . Nothing rolls worse than a large sailing ship with all sails set but empty, the booms going from side to side, rolling with the swell . Life aboard offered some interesting new things for a boy. Our lights were kerosene lamps, swiveled to always stay level. After three days the ice ran out so no more fresh meat. Our diet consisted of salt pork, beef, fish, potatoes, onions, carrots, dried beans and canned goods. A favorite

breakfast dish was &quot;Cod Fish Sounds and Tongues&quot; which I never learned to like. We did have eggs which were kept in a large barrel of Isinglass solution, but they got a little strong by the end of a long trip . A dampened cloth and partitions on the table kept dishes from rolling in rough weather. I learned to box the compass, read the log towed from the taffrail aft to estimate our speed, to tie some intricate sailors&#39; knots and to ring the ship&#39;s bell eight times in the nautical way, when the Captain or Mate gave the signal at the noon sun sighting. The crew was divided into two watches, four on and four off, except for the dog watches which ran 4-6 PM and 6-8 PM as to alternate the two watches . The Captain always hoped to pick up a tug at the entrance of the Straits of Juan de Fuca and be towed the rest of the way, but this rarely happened. By the time I had made my last trip on Uncle Will&#39;s new ship, the Commodore, he had installed a gasoline generator, so we had lights and a wireless with operator, enabling us to order up a tug to meet us at Cape Flattery, However, on this, my first trip, we had to sail up the Straits to Port Townsend, tacking back and forth through pea-soup fog. This was an eerie experience. We had two sailors up forward as lookouts, one operating the foghorn at regular intervals, and one of the mates estimated the distance from shore by timing the return echo. This was further checked by heaving the lead to get our depth, the lead having a hollowed-out cup filled with tallow to which the material on the bottom would stick . The charts told us the depths and types of bottom material. Our destination was Port Gamble, a typical mill town with a mill store that carried everything. On visiting it almost sixty years later, I found it unchanged . The vessel was docked stern to, so that the loads of lumber could be hauled up by the &quot;donkey&quot; on wide greased slides. The Alice Cooke carried less than a million board feet of lumber in holds and deck load. Uncle Will took me to Seattle with him when he made the rounds of the ship chandlers . This was not only to purchase stores but was also a social event for the captains. After a number of trips I learned that they would repeat the same yarns over and over, often to the same audiences; however everyone listened attentively as if it was always the first telling. Uncle Will&#39;s new vessel, the Commodore, was also a four-masted schooner, but larger, and so carrying a bigger payload . Her accommodations aft were roomier, but functional and not ornate. SEA HISTORY, FALL 1981