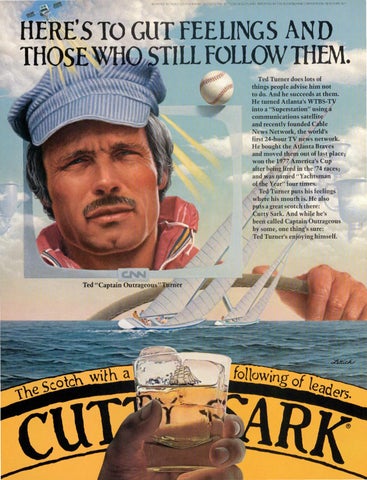 HER£' STO GUT FEELINGS AND THOS TILL FOLLOW mm.

Ted Turner does lots of things people advise him not to do. And he succeeds at them. He turned Atlanta's WTBS-TV into a "Superstation" using a communications satellite and recently founded Cable News Network, the world's first 24-hour TV-news network. He bought the Atlanta Braves and moved them out of last place; won the 1977 America's Cup after being fired in the '74 races; and as named "Yachtsman of the ear" four times. Ted Trimer puts his feelings wh~re his mouth is. He also puts a great scotch there: Cutty Sark. And wh* he's been called Captai~Outrageous by some, one thing's sure: Ted Turner's enjoying himself.