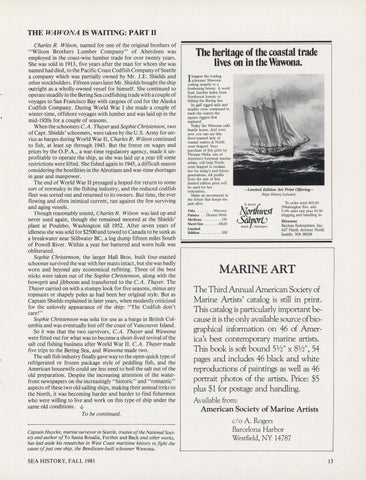 THE WAWONA IS WAITING: PART II Charles R . Wilson, named for one of the original brothers of "Wilson Brothers Lumber Company" of Aberdeen was employed in the coast-wise lumber trade for over twenty years. She was sold in 1913, five years after the man for whom she was named had died, to the Pacific Coast Codfish Company of Seattle a company which was partially owned by Mr . J .E. Shields and other stockholders. Fifteen years later Mr. Shields bought the ship outright as a wholly-owned vessel for himself. She continued to operate steadily in the Bering Sea cod fishing trade with a couple of voyages to San Francisco Bay with cargoes of cod for the Alaska Codfish Company . During World War I she made a couple of winter-time, offshore voyages with lumber and was laid up in the rnid-1920s for a couple of seasons. When the schooners C.A. Thayer and Sophie Christenson, two of Capt. Shields' schooners, were taken by the U .S. Army for service as barges during World War II, Charles R . Wilson continued to fish, at least up through 1943. But the freeze on wages and prices by the O.P.A., a war-time regulatory agency, made it unprofitable to operate the ship, as she was laid up a year till some restrictions were lifted . She fished again in 1945, a difficult season considering the hostilities in the Aleutians and war-time shortages in gear and manpower. The end of World War II presaged a hoped-for return to some sort of normalcy in the fishing industry, and the reduced codfish fleet was sorted out and returned to its owners. But time, the ever flowing and often inimical current, ran against the few surviving and aging vessels. Though reasonably sound, Charles R. Wilson was laid up and never used again, though she remained moored at the Shields' plant at Poulsbo, Washington till 1952. After seven years of idleness she was sold for $2500 and towed to Canada to be sunk as a breakwater near Stillwater BC, a log dump fifteen miles South of Powell River. Within a year her battered and worn hulk was obliterated. Sophie Christenson, the larger Hall Bros. built four-masted schooner survived the war with her masts intact, but she was badly worn and beyond any economical refitting. Three of the best sticks.were taken out of the Sophie Christenson, along with the bowsprit and jibboom and transferred to the C.A . Thayer. The Thayer carried on with a stumpy look for five seasons, minus any topmasts or shapely poles as had been her original style. But as Captain Shields explained in later years, when modestly criticized for the unlovely appearance of the ship: "The Codfish don't care!" Sophie Christenson was solo for use as a barge in British Columbia and was eventually lost off the coast of Vancouver Island. So it was that the two survivors, C.A. Thayer and Wawona were fitted out for what was to become a short-lived revival of the salt cod fishing business after World War II. C.A. Thayer made five trips to the Bering Sea, and Wawona made two. The salt fish industry finally gave way to the open-quick type of refrigerated or frozen package style of peddling fish, and the American housewife could see less need to boil the salt out of the old preparation. Despite the increasing attention of the waterfront newspapers on the increasingly "historic" and "romantic" aspects of these two old sailing ships, making their annual treks to the North, it was becoming harder and harder to find fishermen who were willing to live and work on this type of ship under the same old conditions. w To be continued. Captain Huycke, marine surveyor in Seattle, trustee of the National Society and author of To Santa Rosalia, Further and Back and other works, has laid aside his researches in West Coast maritime history to fight the cause of just one ship, the Bendixsen-built schooner Wawona.

The heritage of the coastal trade lives on in the Wawona.

shipping and handling to:

MARINE ART The Third Annual American Society of Marine Artists' catalog is still in print. This catalog is particularly important be, cause it is the only available source ofbio, graphical information on 46 of Amer, ica's best contemporary marine artists. This book is soft bound 5 1/ 2 x 8 1/2 54 pages and includes 46 black and white reproductions of paintings as well as 46 portrait photos of the artists. Price: $5 plus $1 for postage and handling. Available from : 11