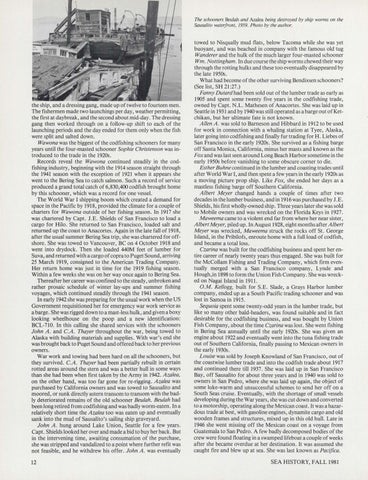 The schooners Beulah and Azalea being destroyed by ship worms on the Sausalito waterfront, 1959. Photo by the author.

the ship, and a dressing gang, made up of twelve to fourteen men. The fishermen made two launchings per day, weather permitting, the first at daybreak, and the second about mid-day. The dressing gang then worked through on a follow-up shift to each of the launching periods and the day ended for them only when the fish were split and salted down. Wawona was the biggest of the cod fishing schooners for many years until the four-masted schooner Sophie Christenson was introduced to the trade in the 1920s. Records reveal the Wawona continued steadily in the codfishing industry, beginning with the 1914 season straight through the 1941 season with the exception of 1921 when it appears she went to the Bering Sea to catch salmon . Such a record of service produced a grand total catch of 6,830,400 codfish brought home by this schooner, which was a record for one vessel. The World War I shipping boom which created a demand for space in the Pacific by 1918, provided the climate for a couple of charters for Wawona outside of her fishing season. In 1917 she was chartered by Capt. J.E. Shields of San Francisco to load a cargo for Hilo. She returned to San Francisco, loaded salt and returned up the coast to Anacortes. Again in the late fall of 1918, after the usual summer Bering Sea trip, she was chartered for offshore. She was towed to Vancouver, BC on 4 October 1918 and went into drydock. Then she loaded 440M feet of lumber for Suva, and returned with a cargo of copra to Puget Sound, arriving 25 March 1919, consigned to the American Trading Company. Her return home was just in time for the 1919 fishing season. Within a few weeks she was on her way once again to Bering Sea. Thereafter her career was confined to the steady, unbroken and rather prosaic schedule of winter lay-ups and summer fishing voyages, which continued steadily through the 1941 season. In early 1942 she was preparing for the usual work when the US Government requisitioned her for emergency war work service as a barge. She was rigged down to a mast-less hulk, and given a boxy looking wheelhouse on the poop and a new identification: BCL-710. In this calling she shared services with the schooners John A. and C.A. Thayer throughout the war, being towed to Alaska with building materials and supplies. With war&#39;s end she was brought back to Puget Sound and offered back to her previous owners. War work and towing had been hard on all the schooners, but they survived. C.A. Thayer had been partially rebuilt in certain rotted areas around the stern and was a better hull in some ways than she had been when first taken by the Army in 1942. Azalea, on the other hand, was too far gone for re-rigging. Azalea was purchased by California owners and was towed to Sausalito and moored, or sunk directly astern transom to transom with the badly deteriorated remains of the old schooner Beulah. Beulah had been long retired from codfishing and was badly worm-eaten. In a relatively short time the Azalea too was eaten up and eventually sank into the mud of Sausalito&#39;s sailing ship graveyard. John A. hung around Lake Union, Seattle for a few years. Capt. Shields looked her over and made a bid to buy her back. But in the intervening time, awaiting consumation of the purchase, she was stripped and vandalized to a point where further refit was not feasible, and he withdrew his offer. John A. was eventually 12

towed to Nisqually mud flats, below Tacoma while she was yet buoyant, and was beached in company with the famous old tug Wanderer and the hulk of the much larger four-masted schooner Wm. Nottingham. In due course the ship worms chewed their way through the rotting hulks and these too eventually disappeared by the late 1950s. What had become of the other surviving Bendixsen schooners? (See list, SH 21 :27 .) Fanny Dutard had been sold out of the lumber trade as early as 1905 and spent some twenty five years in the codfishing trade, owned by Capt. N.L. Mathesen of Anacortes. She was laid up in Seattle in 1931 and by 1940was still operated as a barge out of Ketchikan, but her ultimate fate is not known. Allen A. was sold to Barneson and Hibbard in 1912 to be used for work in connection with a whaling station at Tyee, Alaska, later going into codfishing and finally fur trading for H. Liebes of San Francisco in the early 1920s. She survived as a fishing barge off Santa Monica, California, minus her masts and known as the Fox and was last seen around Long Beach Harbor sometime in the early 1950s before vanishing to some obscure corner to die. Esther Buhne continued in the lumber and coasting trades until after World War I, and then spent a few years in the early 1920s as a moving picture prop ship. Like Fox, she ended her days as a mastless fishing barge off Southern California. Albert Meyer changed hands a couple of times after two decades in the lumber business, and in 1916 was purchased by J.E. Shields, his first wholly-owned ship. Three years later she was sold to Mobile owners and was wrecked on the Florida Keys in 1927. Maweema came to a violent end far from where her near sister, Albert Meyer, piled up. In August 1928, eight months after Albert Meyer was wrecked, Maweema struck the rocks off St. George Island, in the Pribilofs, enroute home with a full load of codfish, and became a total loss. Czarina was built for the codfishing business and spent her entire career of nearly twenty years thus engaged. She was built for the McCollam Fishing and Trading Company, which firm eventually merged with a San Francisco company, Lynde and Hough,in 1898 to form the Union Fish Company. She was wrecked on Nagai Island in 1911. O.M. Kellogg, built for S.E. Slade, a Grays Harbor lumber company, ended up as a South Pacific trading schooner and was lost in Samoa in 1915. Sequoia spent some twenty-odd years in the lumber trade, but like so many other bald-headers, was found suitable and in fact desirable for the codfishing business, and was bought by Union Fish Company, about the time Czarina was lost. She went fishing in Bering Sea annually until the early 1920s. She was given an engine about 1922 and eventually went into the tuna fishing trade out of Southern California, finally passing to Mexican owners in the early 1930s. Louise was sold by Joseph Knowland of San Francisco, out of the coastwise lumber trade and into the codfish trade about 1917 and continued there till 1937. She was laid up in San Francisco Bay, off Sausalito for about three years and in 1940 was sold to owners in San Pedro, where she was laid up again, the object of some Juke-warm and unsuccessful schemes to send her off on a South Seas cruise. Eventually, with the shortage of small vessels developing during the War years, she was cut down and converted to a motorship, operating along the Mexican coast. It was a hazardous trade at best, with gasoline engines, dynamite cargo and old wooden frames and structures, mixed up in this old hull. Late in 1946 she went missing off the Mexican coast on a voyage from Guatemala to San Pedro. A few badly decomposed bodies of the crew were found floating in a swamped lifeboat a couple of weeks after she became overdue at her destination. It was assumed she caught fire and blew up at sea. She was last known as Pacifica. SEA HISTORY, FALL 1981