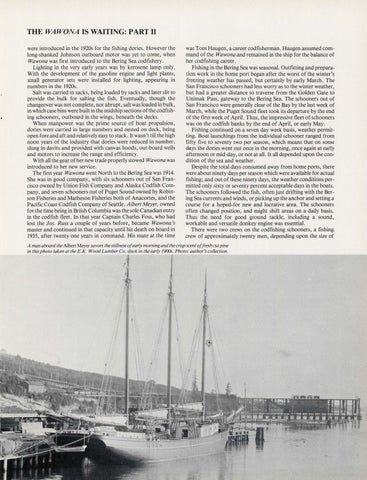 THE WAWONA IS WAITING: PART II were introduced in the 1920s for the fishing dories. However the long-shanked Johnson outboard motor was yet to come, when Wawona was first introduced to the Bering Sea codfishery. Lighting in the very early years was by kerosene lamp only. With the development of the gasoline engine and light plants, small generator sets were installed for lighting, appearing in numbers in the 1920s. Salt was carried in sacks, being loaded by sacks and later slit to provide the bulk for salting the fish. Eventually, though the changeover was not complete, nor abrupt, salt was loaded in bulk, in which case bins were built in the midship sections of the cod fishing schooners, outboard in the wings, beneath the decks. When manpower was the prime source of boat propulsion, dories were carried in large numbers and nested on deck, being open fore and aft and relatively easy to stack. It wasn&#39;t till the high noon years of the industry that dories were reduced in number, slung in davits and provided with canvas hoods, out-board wells and motors to increase the range and efficiency. With all the gear of her new trade properly stowed Wawona was introduced to her new service. The first year Wawona went North to the Bering Sea was 1914. She was in good company, with six schooners out of San Francisco owned by Union Fish Company and Alaska Codfish Company, and seven schooners out of Puget Sound owned by Robinson Fisheries and Matheson Fisheries both of Anacortes, and the Pacific Coast Codfish Company of Seattle. Albert Meyer, owned for the time being in Briish Columbia was the sole Canadian entry in the codfish fleet. In that year Captain Charles Foss, who had lost the Jos. Russ a couple of years before, became Wawona&#39;s master and continued in that capacity until his death on board in 1935, after twenty one years in command. His mate at the time

was Tom Haugen, a career codfisherman. Haugen assumed command of the Wawona and remained in the ship for the balance of her codfishing career. Fishing in the Bering Sea was seasonal. Outfitting and preparation work in the home port began after the worst of the winter&#39;s freezing weather has passed, but certainly by early March. The San Francisco schooners had less worry as to the winter weather, but had a greater distance to traverse from the Golden Gate to Unimak Pass, gateway to the Bering Sea. The schooners out of San Francisco were generally clear of the Bay by the last week of March, while the Puget Sound fleet took its departure by the end of the first week of April. Thus, the impressive fleet of schooners was on the codfish banks by the end of April, or early May. Fishing continued on a seven day week basis, weather permitting. Boat launchings from the individual schooner ranged from fifty five to seventy two per season, which means that on some days the dories went out once in the morning, once again at early afternoon or mid-day, or not at all. It all depended upon the condition of the sea and weather. Despite the total days consumed away from home ports, there were about ninety days per season which were available for actual fishing; and out of these ninety days, the weather conditions permitted only sixty or seventy percent acceptable days in the boats. The schooners followed the fish, often just drifting with the Bering Sea currents and winds, or picking up the anchor and setting a course for a hoped-for new and lucrative area. The schooners often changed position, and might shift areas on a daily basis. Thus the need for good ground tackle, including a sound, workable and versatile donkey engine was essential. There were two crews on the codfishing schooners, a fishing crew of approximately twenty men, depending upon the size of

A man aboard the Albert Meyer savors the stillness ofearly morning and the crisp scent offresh cut pine in this photo taken at the E.K. Wood Lumber Co. dock in the early 1900s. Photo: author&#39;s collection.