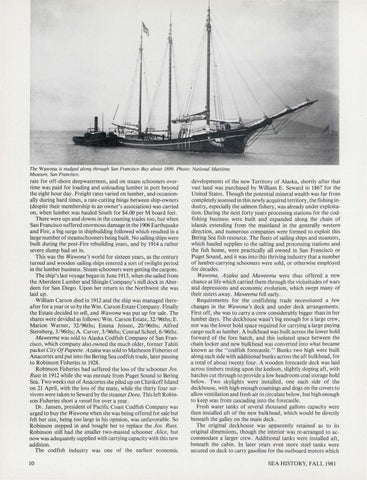 The Wawona is nudged along through San Francisco Bay about 1899. Photo: National Maritime Museum, San Francisco.

rate for off-shore deepwatermen, and on steam schooners overtime was paid for loading and unloading lumber in port beyond the eight hour day. Freight rates varied on lumber, and occasionally during hard times, a rate-cutting binge between ship-owners (despite their membership in an owner&#39;s association) was carried on, when lumber was hauled South for $4.00 per M board feet. There were ups and downs in the coasting trades too, but when San Francisco suffered enormous damage in the 1906 Earthquake and Fire, a big surge in shipbuilding followed which resulted in a large number of steamschooners being built. No sailing ships were built during the post-Fire rebuilding years, and by 1914 a rather severe slump had set in. This was the Wawona&#39;s world for sixteen years, as the century turned and wooden sailing ships entered a sort of twilight period in the lumber business. Steam schooners were getting the cargoes. The ship&#39;s last voyage began in June 1913, when she sailed from the Aberdeen Lumber and Shingle Company&#39;s mill dock in Aberdeen for San Diego. Upon her return to the Northwest she was laid up. William Carson died in 1912 and the ship was managed thereafter for a year or so by the Wm. Carson Estate Company. Finally the Estate decided to sell, and Wawona was put up for sale. The shares were devided as follows: Wm. Carson Estate, 32/96ths; E. Marion Warner, 32/ 96ths; Emma Jensen, 20/96ths; Alfred Sternberg, 3/ 96ths; A. Carver, 3/ 96ths; Conrad Scheel, 6/ 96ths. Maweema was sold to Alaska Codfish Company of San Francisco, which company also owned the much older, former Tahiti packet City Of Papeete. Azalea was sold to Matheson Fisheries of Anacortes and put into the Bering Sea codfish trade, later passing to Robinson Fisheries in 1928. Robinson Fisheries had suffered the loss of the schooner Jos. Russ in 1912 while she was enroute from Puget Sound to Bering Sea. Two weeks out of Anacortes she piled up on Chirikoff Island on 21 April, with the loss of the mate, while the thirty four survivors were taken to Seward by the steamer Dora. This left Robinson Fisheries short a vessel for over a year. Dr. Jansen, president of Pacific Coast Codfish Company was urged to buy the Wawona when she was being offered for sale but felt her size, being too large in his opinion, was unfavorable. So Robinson stepped in and bought her to replace the Jos. Russ. Robinson still had the smaller two-masted schooner Alice, but now was adequately supplied with carrying capacity with this new addition. The codfish industry was one of the earliest economic 10

developments of the new Territory of Alaska, shortly after that vast land was purchased by William E. Seward in 1867 for the United States. Though the potential mineral wealth was far from completely assessed in this newly acquired territory, the fishing industry, especially the salmon fishery, was already under exploitation. During the next forty years processing stations for the codfishing business were built and expanded along the chain of islands extending from the mainland in the generally western direction, and numerous companies were formed to exploit this Bering Sea fish resource. The fleets of sailing ships and steamers, which hauled supplies to the salting and processing stations and the fish home, were practically all owned in San Francisco or Puget Sound, and it was into this thriving industry that a number of lumber-carrying schooners were sold, or otherwise employed for decades. Wawona, Azalea and Maweema were thus offered a new chance at life which carried them through the vicissitudes of wars and depressions and economic evolution, which swept many of their sisters away. Maweema fell early. Requirements for the codfishing trade necessitated a few changes in the Wawona&#39;s deck and under deck arrangements. First off, she was to carry a crew considerably bigger than in her lumber days. The deckhouse wasn&#39;t big enough for a large crew, nor was the lower hold space required for carrying a large paying cargo such as lumber. A bulkhead was built across the lower hold forward of the fore hatch, and this isolated space between the chain locker and new bulkhead was converted into what became known as the &quot;codfish forecastle.&quot; Bunks two high were built along each side with additional bunks across the aft bulkhead, for a total of about twenty four. A wooden forecastle deck was laid across timbers resting upon the keelson , slightly sloping aft, with hatches cut through to provide a low headroom coal storage hold below. Two skylights were installed, one each side of the deckhouse, with high enough coamings and dogs on the covers to allow ventilation and fresh air to circulate below, but high enough to keep seas from cascading into the forecastle . Fresh water tanks of several thousand gallons capacity were then installed aft of the new bulkhead, which would be directly beneath the galley on the main deck. The original deckhouse was apparently retained as to its original dimensions, though the interior was re-arranged to accommodate a larger crew. Additional tanks were installed aft, beneath the cabin. In later years even more steel tanks were secured on deck to carry gasoline for the outboard motors which SEA HISTORY, FALL 1981