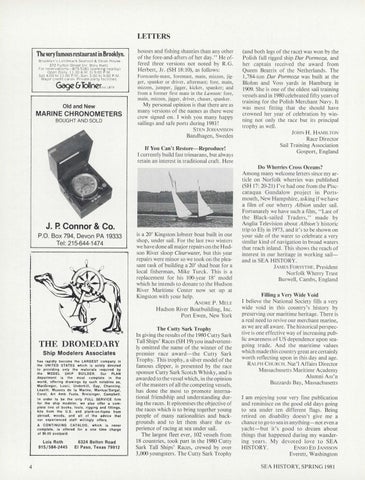 My personal opinion is that there are as many versions of the names as there were crew signed on. I wish you many happy sailings and safe ports during 1981! STEN JOHANSSON Bandhagen, Sweden

If You Can&#39;t Restore-Reproduce! I cu rrentl y build fast trimarans, but a lways retain an interest in traditional craft. Here

(and both legs of the race) was won by the Polish full rigged ship Dar Pormoza, and her captain received the award from Queen Beatrix of the Netherlands . The 1,784-ton Dar Pormoza was built at the Blohm and Voss yards in Hamburg in 1909. She is one of the oldest sai l training vessels and in 1980 celebrated fifty years of training for the Polish Merchant Navy. It was most fitting that she should have crowned her year of celebration by winning not only the race but its principal trophy as well. JOHN H . HAMILTON Race Director Sail Training Association Gosport, England

is a 20&#39; Kingston lobster boat built in our shop, under sail. For the last two wi nters we have done all major repairs on the H udson River sloop Clearwater, but this year repairs were minor so we took on the pleasant task of building a 20&#39; shad boat for a local fisherman, Mike T urck . Th is is a replacement for his 100-year 18&#39; model which he intends to donate to the Hudson Ri ve r Maritime Center now set up at Kingston with your help. ANDRE P. MELE Hudson River Boatbuilding, Inc. Port Ewen, New York

the UNITED STATES which is solely devoted to providing

for the ship modeler, we also offer a complete line of books, tools , rigging and fittings, kits from the U.S. and plank-on-frame from abroad, woods, and all of the advice that our experienced staff willingly offers. A CONTINUING CATALOG , which is never complete, is offered for a one time charge of $6 .00 postpaid.

In giving the results of the 1980 Cutty Sark Tall Ships&#39; Races (SH 19) you inadvertently omitted the name of the winner of the premier race award-t he Cutty Sark Trophy . T his trophy, a silver model of the famou s clipper, is presented by the race sponsor C utt y Sark Scotch Whisky, and is awarded to the vessel which, in the opin ion of the masters of a ll the competing vessels, has done the most to promote international fri endship and understanding during the races. It epitomises the objective of the races which is to bring together yo ung people of many nationalities and backgrounds a nd to let them share the experience of racing at sea under sail. The largest fleet ever, 102 vessels from 18 countries, took part in the 1980 Cutty Sark Tall Ships&#39; Races, crewed by over 3,000 youngsters. The Cutty Sark Trophy

Among many welcome letters since my article on Norfolk wherries was published (SH 17: 20-21) I&#39;ve had one from the Pisccataqua Gundalow project in Portsmouth, New Hampshire, asking if we have a film of our wherry Albion under sail. Fo rtun ately we have such a film, &quot;Last of the Black-sailed Traders,&quot; made by Anglia Television about Albion&#39;s historic trip to Ely in 1973, and it&#39;s to be shown on your side of the water to celebrate a very similar kind of navigation in broad waters that reach inland. Thi s shows the reach of interest in our heritage in work ing sailand in SEA HISTORY. JAM ES FORSYTH E, President Norfolk Wherry Trust Burwell , Cambs, England

Filling a Very Wide Void I believe the National Society fills a very wide void in this country&#39;s history by preserving our maritime heritage. There is a real need to revive our merchant marine, as we are all aware . The historical perspective is o ne effective way of increasing public awareness of US dependence upon seago ing trade. And the maritime values which made this country great are certainly worth reflecting upon in this day and age. RALPH CH URCH, Nat&#39;! Affairs Director Massachusetts Maritime Academy Alumni Ass&#39; n Buzzards Bay, Massachusetts I am enjoying your very fine publication and reminisce on th e good o ld days going to sea under ten different fl ags. Being retired on di sability doesn&#39;t give me a chance to go to sea in anyth ing-not even a yac ht-b ut it&#39;s good to dream about things that happened during my wanderin g years. My devoted love to SEA HISTORY . ENSIO ED JANSSON Everett, Washington SEA HISTORY, SPRING 1981