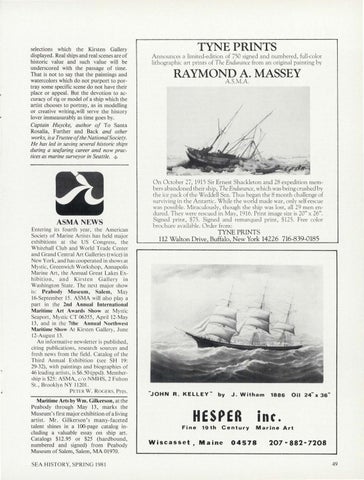 selections which the Kirsten Gallery displayed. Real ships and real scenes are of historic value and such value will be underscored with the passage of time. That is not to say that the paintings and watercolors which do not purport to portray some specific scene do not have their place or appeal. But the devotion to accuracy of rig or model of a ship which the artist chooses to portray, as in modelling or creative writing, will serve the history lover immeasurably as time goes by. Captain Huycke, author of To Santa Rosalia, Further and Back and other

TYNE PRINTS Anno unces a limited-editio n of 750 signed and numbered, full-color lithograp hic art prints of The Endurance from an original painting by

works, isa Trustee of the National Society. He has led in saving several historic ships during a seafaring career and now practices as marine surveyor in Seattle. u,

Maritime Arts by Wm. Gilkerson, at the Peabody through May 13, marks the Museum&#39;s first major exhibition of a living artist. Mr. Gilkerson&#39;s many-faceted talent shines in a 100-page catalog including a valuable essay on ship art. Catalogs $ 12.95 or $25 (hardbound, numbered and signed) from Peabody Museum of Salem, Salem, MA 01970. SEA HISTORY, SPRING 1981

On O ctober 27, 19 15 Sir Ernest Shackleton and 28 expedition members abando ned their ship, The Endurance, which was being crushed by th e ice pack of the Weddell Sea. Thus began the 8 month challenge of surviving in the Antartic. While the world made war, onl y self-rescue was possible. Miraculously, though the ship was lost, all 29 men endured . They were rescued in May, 19 16. Print image size is 20&quot; x 26&quot;. Signed print, $75. Signed and remarqued print, $ 125. Free colo r brochure avail able. Order from: