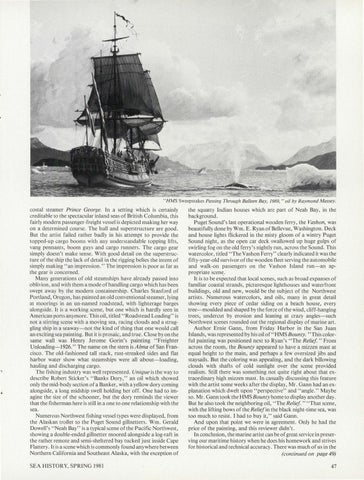 costal steamer Prince George. In a setting which is certainly creditable to the spectacular inland seas of British Columbia, this fairly modern passenger-freight vessel is depicted making her way on a determined course. The hull and superstructure are good. But the artist failed rather badly in his attempt to provide the topped-up cargo booms with any understandable topping lifts, vang pennants, boom guys and cargo runners. The cargo gear simply doesn&#39;t make sense. With good detail on the superstructure of the ship the lack of detail in the rigging belies the intent of simply making &quot;an impression.&quot; The impression is poor as far as the gear is concerned. Many generations of old steamships have already passed into oblivion, and with them a mode of handling cargo which has been swept away by the modern containership. Charles Stanford of Portland, Oregon, has painted an old conventional steamer, lying at moorings in an un-named roadstead, with lighterage barges alongside. It is a working scene, but one which is hardly seen in American ports anymore. This oil, titled &quot;Roadstead Loading&quot; is not a stirring scene with a moving sea, racing clouds and a struggling ship in a seaway-not the kind of thing that one would call an exciting sea painting. But it is prosaic, and true. Close by on the same wall was Henry Jerome Gorin&#39;s painting &quot;Freighter Unloading-1926.&quot; The name on the stern is Alma of San Francisco. The old-fashioned tall stack, rust-streaked sides and flat harbor water show what steamships were all a bout-loading, hauling and discharging cargo. The fishing industry was well represented . Unique is the way to describe Robert Sticker&#39;s &quot;Banks Dory,&quot; an oil which showed only the mid-body section of a Banker, with a yellow dory coming alongside, a long midship swell holding her off. One had to imagine the size of the schooner, but the dory reminds the viewer that the fisherman here is still in a one to one relationship with the sea. Numerous Northwest fishing vessel types were displayed, from the Alaskan trailer to the Puget Sound gillnetters. Wm. Gerald Dowell&#39;s &quot;Neah Bay&quot; is a typical scene of the Pacific Northwest, showing a double-ended gillnetter moored alongside a log-raft in the rather remote and semi-sheltered bay tucked just inside Cape Flattery. It is a scene which is commonly found anywhere between Northern California and Southeast Alaska, with the exception of SEA HISTORY, SPRING 1981

the squatty Indian houses which are part of Neah Bay, in the background. Puget Sound&#39;s last operational wooden ferry, the Vashon, was beautifully done by Wm. E. Ryan of Bellevue, Washington . Deck and house lights flickered in the misty gloom of a wintry Puget Sound night, as the open car deck swallowed up huge gulps of swirling fog on the old ferry&#39;s nightly run, across the Sound. This watercolor, titled &quot;The Vashon Ferry&quot; clearly indicated it was the fifty-year-old survivor of the wooden fleet serving the automobile and walk-on passengers on the Vashon Island run-an appropriate scene. It is to be expected that local scenes, such as broad expanses of familiar coastal strands, picturesque lighthouses and waterfront buildings, old and new, would be the subject of the Northwest artists . Numerous watercolors, and oils, many in great detail showing every piece of cedar siding on a beach house, every tree-moulded and shaped by the force of the wind, cliff-hanging trees, undercut by erosion and leaning at crazy angles-such Northwest scenes rounded out the regional display of marine art. Author Ernie Gann, from Friday Harbor in the San Juan Islands, was represented by his oil of &quot;HMS Bounty. &quot;This colorful painting was positioned next to Ryan&#39;s &quot; The Relief&quot; From across the room, the Bounty appeared to have a mizzen mast at equal height to the main , and perhaps a few oversized jibs and staysails. But the coloring was appealing, and the dark billowing clouds with shafts of cold sunlight over the scene provided realism. Still there was something not quite right about that extraordinary high mizzen mast. In casually discussing this feature with the artist some weeks after the display , Mr. Gann had an explanation which dwelt upon &quot;perspective&quot; and &quot;angle.&quot; Maybe so. Mr. Gann took the HMS Bounty home to display another day. But he also took the neighboring oil, &#39;&#39;The Relief &quot;&#39; &#39;That scene, with the lifting bows of the Relief in the black night-time sea, was too much to resist. I had to buy it,&#39;&#39; said Gann. And upon that point we were in agreement. Only he had the price of the painting, and this reviewer didn&#39;t. In conclusion, the marine artist can be of great service in preserving our maritime history when he does his homework and strives for historical and technical accuracy . There was much of us in the