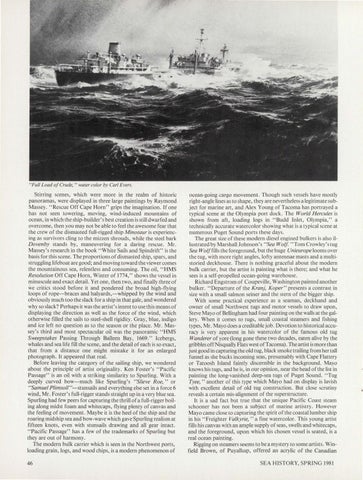 Stirring scenes, which were more in the realm of historic panoramas, were displayed in three large paintings by Raymond Massey. "Rescue Off Cape Horn" grips the imagination. If one has not seen towering, moving, wind-induced mountains of ocean, in which the ship-builder's best creation is still dwarfed and overcome, then you may not be able to feel the awesome fear that the crew of the dismasted full-rigged ship Minotaur is experiencing as survivors cling to the mizzen shrouds, while the steel bark Dovenby stands by, maneuvering for a daring rescue. Mr. Massey's research in the book "White Sails and Spindrift" is the basis for this scene. The proportions of dismasted ship, spars, and struggling Ii feboat are good; and moving toward the viewer comes the mountainous sea, relentless and consuming. The oil, "HMS Resolution Off Cape Horn, Winter of 1774,'' shows the vessel in minuscule and exact detail. Yet one, then two, and finally three of we critics stood before it and pondered the broad high-flying loops of rope-braces and halyards,-whipped by the wind and obviously much too the slack for a ship in that gale, and wondered why so slack? Perhaps it was the artist's intent to use this means of displaying the direction as well as the force of the wind, which otherwise filled the sails to steel-shell rigidity. Gray, blue, indigo and ice left no question as to the season or the place. Mr. Massey's third and most spectacular oil was the panoramic "HMS Sweepstakes Passing Through Halleen Bay, 1669." Icebergs, whales and sea life fill the scene, and the detail of each is so exact, that from a distance one might mistake it for an enlarged photograph. It appeared that real. Before leaving the category of the sailing ship, we wondered about the principle of artist originality. Ken Foster's "Pacific Passage" is an oil with a striking similarity to Spurling. With a deeply curved bow-much like Spurling's "Slieve Roe, " or "Samuel Plimsol/"-stunsails and everything else set in a force 6 wind, Mr. Foster's full-rigger stands straight up in a very blue sea. Spurling had few peers for capturing the thrill of a full-rigger boiling along midst foam and whitecaps, flying plenty of canvas and the feeling of movement. Maybe it is the heel of the ship and the roaring midship sea and bow-wave which gave Spurling realism at fifteen knots, even with stunsails drawing and all gear intact. "Pacific Passage" has a few of the trademarks of Spurling but they are out of harmony. The modern bulk carrier which is seen in the Northwest ports, loading grain, logs, and wood chips, is a modern phenomenon of

ocean-going cargo movement. Though such vessels have mostly right-angle lines as to shape, they are nevertheless a legitimate subject for marine art, and Alex Young of Tacoma has portrayed a typical scene at the Olympia port dock. The World Hercules is shown from aft, loading logs in "Budd Inlet, Olympia," a technically accurate watercolor showing what is a typical scene at numerous Puget Sound ports these days. The great size of these modern diesel engined bulkers is also illustrated by Marshall Johnson's "Sea Wolf. "Tom Crowley's tug Sea Woiffills the foreground, but the huge Unieurope looms over the tug, with more right angles, lofty antennae masts and a multistoried deckhouse. There is nothing graceful about the modern bulk carrier, but the artist is painting what is there; and what he sees is a self-propelled ocean-going warehouse. Richard Engstrom of Coupeville, Washington painted another bulker. "Departure of the Kranj, Koper" presents a contrast in size with a small salmon seiner and the stern of the bigger ship. With some practical experience as a seaman, deckhand and owner of small Northwest tugs and motor vessels to draw upon, Steve Mayo of Bellingham had four painting on the walls at the gallery. When it comes to tugs, small coastal steamers and fishing types, Mr. Mayo does a creditable job. Devotion to historical accuracy is very apparent in his watercolor of the famous old tug Wanderer of yore (long gone these two decades, eaten alive by the gribbles off Nisqually Flats west of Tacoma). The artist is more than just good in capturing the old tug, black smoke trailing from her tall funnel as she bucks incoming seas, presumably with Cape Flattery or Tatoosh Island faintly discernible in the background. Mayo knows his tugs, and he is, in our opinion, near the head of the list in painting the long-vanished deep-sea tugs of Puget Sound. "Tug Tyee, " another of this type which Mayo had on display is lavish with excellent detail of old tug construction. But close scrutiny reveals a certain mis-alignment of the superstructure. It is a sad fact but true that the unique Pacific Coast steam schooner has not been a subject of marine artistry. However Mayo came close to capturing the spirit of the coastal lumber ship in his "Freighter Valkyrie," a fine watercolor. This young artist fills his canvas with an ample supply of seas, swells and whitecaps, and the foreground, upon which his chosen vessel is seated, is a real ocean painting. Rigging on steamers se1ems to be a mystery to some artists. Winfield Brown, of Puyallu1p, offered an acrylic of the Canadian SEA HISTORY, SPRING 1981