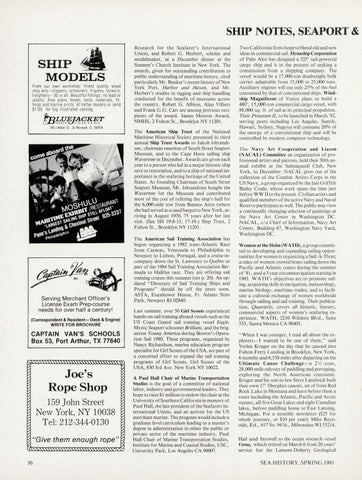 Research for the Seafarer&#39; s Internat ional Union, and Robert G . Herbert, scholar and modelmaker, at a December dinner at the Seamen&#39;s Church Institute in New York . The awards, given for outstanding contribu tion to public understanding of maritime history, cited particularly Mr. Bunker&#39;s recent history of New York Port, Harbor and Haven, and Mr. Herbert&#39;s studies in rigging and ship handling conducted for the benefit of museums across the country. Robert G. Albion, Alan Villiers and Frank G.G. Carr are among previous recipients of the award. J ames Monroe Award, NMHS, 2 Fulton St., Brooklyn NY 11 20 I.

The American Ship Trust of the National Maritime Historical Society presented its third annual Ship Trust Awards to Jakob lsbrandtsen, chairman emeritus of South Street Seaport Museum, and to the Cape Horn sailing sh ip Wavertree in December. Awards are given each year to a person who led in a major histo ric ship save or restoration, and to a sh ip of national importance in the seafaring heritage of the United States. As founding Chairman of South Street Seaport Museum, Mr. Isbrandtsen bought the Wavertree for the Museum and contributed most of the cost of refitting the ship&#39; s hull for the 6,000-mile tow from Buenos Aires (where she had served as a sand barge) to New York, arriving in August 1970, 75 years after her last visit. (See SH 19:8- 13 , 17- 19 .) Ship Trust, 2 Fulton St., Brooklyn NY 11201 .

The American Sail Training Association has begun organizing a 1982 trans-Atlantic Race from Caracas, Venezuela to Philadelphia to Newport to Lisbon , Portugal, and a cruise-incompany down the St. Lawrence to Quebec as part of the 1984 Sail Training Association Bermuda to Halifax race. They are offering sail training cru ises this summer (seep. 20). An updated &quot;Directory of Sail Training Ships and Programs&quot; should be off the press soon. AST A, Eisenhower House, Ft. Adams State Park, Newport RI 02840. Last summer, over 50 G irl Scouts experienced hands-on sai l training aboard vessels such as the US Coast Guard sail training vessel Eagle, Mystic Seaport schooner Brilliant, and the brigantine Young America during Boston&#39;s Operation Sail 1980. These programs, organ ized by Nancy Richardson, marine education program specialist for Girl Scouts of the USA, are part of a concerted effort to expand the sail training programs of Girl Scouts. Girl Scouts of the USA, 830 3rd Ave. New York NY 10022. A Paul Hall Chair of Marine Transportation Studies is the goal of a committee of national labor, industry and governmental leaders. They hope to raise$ I million to endow the chair at the University of Southern California in memory of Paul Hall, the late president of the Seafarers International Union, a nd a n activist for the US merchant marine. The program wou ld include a grad uate level curriculum leading to a master&#39;s degree in administration in either the public or private sector of the maritime industry. Paul Hall Chair of Marine Transportation Studies, Institute for Marine and Coastal Studies, USC, Univers ity Park, Los Angeles CA 90007.

Two California firm s hope to blend old and new ideas in commercial sail. Dynaship Corporation of Palo Alto has des igned a 525&#39; sail-powered cargo ship and is in the process of seeking a commission from a shipping company. The vessel would be a 17 ,000-ton deadweight bulk carrier adaptable from 15,000 to 25,000 tons. Auxiliary engines will use only 25 % of the fuel consumed by that of conventional ships. Windship Magnificent of Venice plans to build a 480&#39;, 15,000-ton commercial cargo vessel, with 88 ,000 sq. ft. of sail as its principal propulsion. Their Preussen fl, to be launched in March &#39;82, servi ng ports including Los Angeles, Seattle, Hawaii, Sydney, Nagoya will consume 20% of the energy of a conventional ship and will be contro lled by modern computer technology. The Navy Art Coo peration and Liason (NACAL) Committee an organization of professio na l artists and patrons, held their 30th annual exhib it at the Salmagundi Club, New York, in December. NACAL grew out of the collection of the Combat Artists Corps in the US Navy, a group organized by the late Griffith Bailey Coa le , whose work spans the time just before WW l l to the present. Civi li an art ists and qualified members of the active Navy and Naval Reserve participate as well. The public may view a continua lly changing selection of paintings at the Navy Art Center in Washington DC. NACAL , c/ o Chief of In format ion, Navy Art Center, Building 67, Washington Navy Yard, Washington DC. Women at the Helm (W ATH), a group comm itted to developing and ex panding sai ling opportunities for women is organ izing a Sail-A-Thon; a relay of women-crewed boats sai ling down the Pacific and Atlantic coasts during the summer of &#39;8 1, and a 3 year circumnavigation starting in 1983 . WATH&#39; s objectives are to promote sai ling, acquiring skill s in navigation, meteorology, marine biology, maritime trades; and to facil itate a cultural exchange of women worldwide through sailing and sail training. Their publication, Quarterly, covers all historic, literary, commercial aspects of women&#39; s seafaring experience. WATH, 2210 Wilshire Blvd., Suite 533 , Santa Monica CA 90403. &quot;When I was younger, I read all about the explorers-I wanted to be one of them,&quot; said Verlen Kruger on the day that he canoed into Fulton Ferry Landing in Brooklyn, New York, 6 months and 6,538 miles after departing on the Ultimate Canoe Challenge-a 2 Y, -year, 28,000-mile odyssey of paddling and portaging, exploring the North American continent. Kruger and his son-in-law Steve Land wick built their own 17&#39; fiberglass canoes, set of from Red Rock Lake in Montana and have before them a route including the Atlant ic, Pacific and Arctic oceans, all five Great Lakes and eight Canadian lakes, before paddling home to East Lansing, Michigan. For a monthly newsletter ($25 for whole jou rney, or $ 10 per year) : Mike Reynolds, Ed., 617 So. 94 St., Milwaukee WI 53214 . Hail a nd farewell to the ocean research vessel Verna, which retired on March 6 from 28 years&#39; service for the Lamont-Doherty Geological