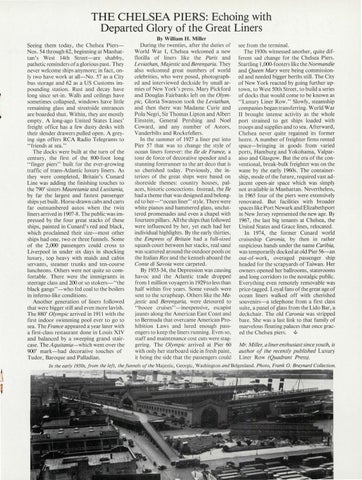 THE CHELSEA PIERS: Echoing with Departed Glory of the Great Liners Seeing them today, the Chelsea PiersNos. 54 through 62, beginning at Manhattan&#39;s West 14th Street-are shabby, pathetic reminders of a glorious past. They never welcome ships anymore; in fac t, only two have work at all-No. 57 as a City bus storage and 62 as a US Customs impounding station. Rust and decay have long since set-in. Walls and ceilings have sometimes collapsed, windows have little remaining glass and streetside entrances are boarded shut. Within , they are mostly empty. A long-ago United States Lines&#39; freight office has a few dusty desks with their slender drawers pulled open. A greying sign offers RCA Radio Telegrams to &quot;friends at sea.&quot; The docks were built at the turn of the century, the first of the 800-foot long &quot;finger piers&quot; built for the ever-growing traffic of trans-At lantic lu xury liners. As they were completed, Britain &#39;s Cunard Line was adding the finishing touches to the 790&#39; sisters Mauretania and Lusitania, by far the largest and fastest passenger ships yet built. Horse-drawn cabs and carts far outnumbered autos when the twin liners arrived in 1907-8. The public was impressed by the four great stacks of these ships, painted in Cunard&#39;s red and black, which proclaimed their size-most other ships had one, two or three funnels. Some of the 2,000 passengers could cross to Liverpool in under six days in shocking luxury, top heavy with maids and cabin servants, steamer trunks and ten-course luncheons. Others were not quite so comfortable. There were the immigrants in steerage class and 200 or so stokers- &quot;the black gangs&quot;-who fed coal to the boilers in inferno-like conditions. Another generation of liners followed that were bigger still and even more lavish. The 880&#39; Olympic arrived in 1911 with the first indoor swimming pool ever to go to sea. The France appeared a year later with a first-class restaurant done in Louis XIV and balanced by a sweeping grand staircase. TheAquitania-which went over the 900&#39; mark-had decorative touches of Tudor, Baroque and Palladian.

By William H. Miller During the twenties, after the duties of World War I, Chelsea welcomed a new flotilla of liners like the Paris and Leviathan, Majestic and Berengaria. They also welcomed great numbers of world celebrities, who were posed, photographed and interviewed deckside by small armies of New York&#39;s press. Mary Pickford and Douglas Fairbanks left on the Olympic, Gloria Swanson took the Leviathan, and then there was Madame Curie and Pola Negri, Sir Thomas Lipton and Albert Einstein, General Pershing and Noel Coward, and any number of Astors, Vanderbilts and Rockefellers. In the summer of 1927 a liner put into Pier 57 that was to change the style of ocean liners forever: the Ile de France, a tour de force of decorative spendor and a stunning forerunner to the art deco that is so cherished today . Previously, the interiors of the great ships were based on shoreside themes: country houses, palaces, historic concoctions. Instead, the Ile had a theme that was designed and belonged to her-&quot;ocean liner&quot; style. There were white pianos and hammered glass, uncluttered promenades and even a chapel with fourteen pillars. All the ships that followed were influenced by her, yet each had her individual highlights . By the early thirties, the Empress of Britain had a full-sized squash court between her stacks, real sand was scattered around the outdoor pools on the Italian Rex and the kennels aboard the Conte di Savoia were carpeted. By I 933-34, the Depression was causing havoc and the Atlantic trade dropped from 1 million voyagers in 1929 to less than half within five years. Some vessels were sent to the scrapheap. Others like the Majestic and Berengaria, were detoured to &quot; booze cruises&quot; -inexpensive, escapist jaunts along the American East Coast and to Bermuda that overcame American Prohibition Laws and lured enough passengers to keep the liners running . Even so, staff and maintenance cost cuts were staggering. The Olympic arrived at Pier 60 with only her starboard side in fresh paint, it being the side that the passengers cou ld

see from the terminal. The 1930s witnessed another, quite different sad change for the Chelsea Piers. Startling 1,000-footers like the Normandie and Queen Mary were being commissioned and needed bigger berths still. The City of New York reacted by going further uptown, to West 50th Street, to build a series of docks that would come to be known as &quot;Luxury Liner Row.&quot; Slowly, steamship companies began transferring. World War II brought intense activity as the whole port strained to get ships loaded with troops and supplies and to sea. Afterward, Chelsea never quite regained its former lustre. A number of freighter firms rented space-bringing in goods from varied ports, Hamburg and Yokohama, Valparaiso and Glasgow. But the era of the conventional, break-bulk freighter was on the wane by the early 1960s. The containership, mode of the future, required vast adjacent open-air space which was simply not available in Manhattan. Nevertheless, in 1965 four of the piers were extensively renovated. But facilities with broader spaces like Port Newark and Elizabeth port in New Jersey represen.ted the new age. By 1967, the last big tenants at Chelsea, the United States and Grace lines, relocated. In 1974, the former Cunard world cruiseship Caronia, by then in rather suspicious hands under the name Caribia, was temporarily docked at old Pier 56-an out-of-work, overaged passenger ship headed for the scrapyards of Taiwan. Her owners opened her ballrooms, staterooms and long corridors to the nostalgic public. Everything even remotely removable was price-tagged. Loyal fans of the great age of ocean liners walked off with cherished souvenirs-a telephone from a first class suite, a panel of glass from the Lido Bar, a deckchair. The old Caronia was stripped bare. She was a last link to that family of marvelous floating palaces that once graced the Chelsea piers. .t

In the early 1930s, from the left, the funnels of the Majestic, Georgie, Washington and Belgenland . Photo, Frank 0. Braynard Collection. }~