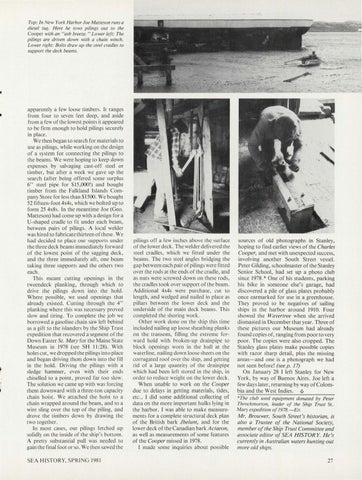 Top: In New York Harbor Joe Matteson runs a diesel tug. Here he to ws pilings out to the Cooper with an &quot;ash breeze.&quot; Lower left: The pilings are driven down with a chain winch. Lower right: Bolts draw up the sfPel cradles to support the deck beams.

apparently a few loose timbers. It ranges from four to seven feet deep , and aside from a few of the lowest points it a ppeared to be firm enough to hold pilings securely in place . We then began to search for materials to use as pilings, while working on the design of a system for connecting the pilings to the beams. We were hoping to keep down expenses by salvaging cast-off steel or timber, but after a week we gave up th e search (after being offered so me surplus 6&quot; steel pipe for $ 15,000!) and bought timber from the Falkland Islands Compan y Store for less than $1500. We bought 52 fifteen-foot 4x4s, which we bolted up to form 25 4x8s. In the meantime Joe (Geo. Matteso n) had come up with a design for a U-shaped cradle to fit under each beam, between pairs of pi lings. A local welder was hired to fabricate thirteen of these. We had decided to place our supports under the three deck beams immediately forward of the lowest point of th e sagging deck, and the three immediately aft, one beam taking three supports and the others two each. This meant cutting openings in the tweendeck planking, through which to drive the pilings down into the hold . Where possible, we used openings that a lread y existed. Cutting through the 4&quot; pla nking where this was necessa ry proved slow a nd tirin g. To complete the job we bo rrowed a gaso line chain saw left behind as a gift to th e islanders by th e Ship Trust ex pedition that recovered a segment of th e Down Easter St. Mary for the Maine State Muse um in 1978 (see SH 11 :28). With holes cut, we dropped the pilings into place and bega n driving th em down into the fill in the hold . Dri ving the pilings with a sledge hammer, even with their ends chiselled to a point, proved far too slow. The solution we came up with was forcin g them downward with a three-ton capacity chain hoist. We attached the hoist to a chain wrapped around the beam , and to a wire sling over the top of th e piling, and drove the timbers down by drawing the two together. In most cases, our pilings fetch ed up solidly on the inside of the ship &#39;s bottom. A pretty substantial pull was needed to gain the final foot or so. We then sawed the SEA H ISTORY, SPRING 1981

pilings off a few inches above the surface of the lower deck. The welder delivered the steel cradles, which we fitted under the beams. The two steel angles bridging the ga p between each pair of pilings were fitted over the rods at the ends of the cradle, and as nuts were screwed down on these rods, the cradles took over support of the beam. Additional 4x4s were purchase, cut to length, and wedged and nailed in place as pillars between the lower deck and the underside of the main d eck beams. This co mpleted the shoring work. Other work don e on the ship this time included nailing up loose sheathin g plank s on the transo m, filling th e extreme forwa rd hold with broken-up drainpipe to block openings worn in th e hull a t th e waterline, nailin g down loose sheets on th e co rrugated roof over the ship, and getting rid of a large quantit y of th e drainpipe which had been left stored in the ship, in order to reduce weight on th e lower deck. When unable to work on the Cooper due to delays in getting materials, tides, etc., I did some additional collecting of data on the more important hulks lying in the harbor. I was able to make measurements for a complete structural deck plan of the British bark Jhelum, and for the lower deck of the Canadian bark Actaeon, as well as measurements of so me features of the Cooper missed in 1978 . I made some inquiries about possible

sources of old photographs in Stanley, hoping to find earlier views of the Charles Cooper, and met with unexpected success, involving a nother South Street vessel. Peter Gilding, sc hoolmaster of the Stanley Senior School, had set up a photo club si nce 1978. * One of his students, parking his bike in so meone else&#39;s garage, had di scovered a pile of glass plates probably once ea rmarked for use in a greenhouse. They proved to be negatives of sailing ships in the harbor around 1910. Four showed the Wavertree when she arrived dismasted in December that year . Three of these pictures our Museum had already found copies of, ranging from poor to very poor. The copies were also cropped. The Stanley glass plates make possible copies with razo r sharp detail, plus the missing areas-and one is a photograph we had not seen before! (seep. 17) On January 28 I left Stanley for New York , by way of Buenos Aires . Joe left a few day s later, returning by way of Colombia and the West Indies. .t *The club used equipment donated by Peter Throckmorton, leader of the Ship Trust St. Mary expedition of 1978.-ED.