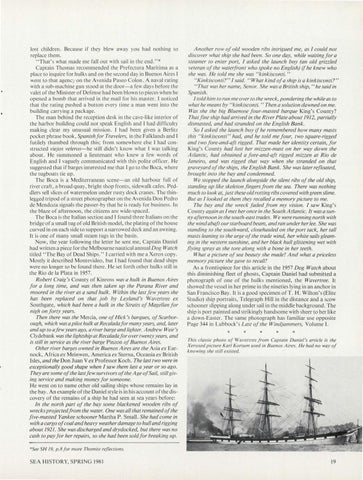 lost children. Because if th ey blew away yo u had nothin g to replace th em. &quot;That&#39;s what made me fall o ut with sail in the end.&quot;* Captain Thomas recomm ended the Prefect ura Maritima as a place to inquire for hulks and on the seco nd day in Buenos Aires I went to th a t agency on the Avenida Paseo Colo n. A nava l rating with a sub-machine gun stood at the door-a few days before the valet of the Minister of Defense had been blown to pieces when he opened a bomb that arrived in the mai l for his master. I noticed that the rating pushed a button every tim e a man went into the building ca rrying a package. The man behind the reception desk in th e cave-like interior of the harbor building cou ld not spea k English and I had diffi culty making clear my unu sual mission . I had been given a Berlit z pocket phrase book, Spanish for Travelers, in the Falklands a nd I futi lely thumbed through this; from so mew here else I had constructed viejos veleros-he still didn&#39;t know what I was talking about. He summoned a lieutenant who knew a few words of English and I vaguely communicated with this polite officer. He suggested that if barges interested me that I go to the Boca, where the tugboats tie up. The Boca is a Mediterranea n scene-an old harbour full of river craft, a broad quay , bright shop fronts, sidewalk cafes. Peddlers sell slices of watermelon under ru sty dock cranes. The thinlegged tripod of a street photographer on the Avenida Don Pedro de Mendoza signals the passer-by that he is read y for business. In the blaze of afternoon, the citizens are wide-spaced. The Boca is the Italian section and I found three Italians o n the bridge of a small tug of old British model, the plating of the house curved in on each side to support a narrowed deck and an awning. It is one of many small steam tugs in the basin . Now, the year followin g the letter he sent me, Captain Da ni el had written a piece for the Melbourne na utica l annual Dog Watch titled &quot;The Bay of Dead Ships.&quot; I carried with me a Xerox copy. Mostly it desc ribed Montevideo, but I had found that dead ships were no longer to be found th ere. He set forth other hulk s still in the Rio de la Plata in 1957 . Robert Craig&#39;s County of Kinross was a hulk in Buenos Aires

for a long time, and was then taken up the Parana River and moored in the river as a sand hulk. Within the last few years she has been replaced on that job by Ley land &#39;s Wavertree ex Southgate, which had been a hulk in the Straits of Magellan for nigh on f arty years. Then there was the Mercia, one of Hick&#39;s barques, of Scarborough, which was a pilot hulk at Recaladafor many years, and, later and up to a few years ago, a river barge and lighter. Andrew Weir&#39;s Clydebank was the lightship at Recaladafor over twenty years, and is still in service as the river barge Pinzon of Buenos Aires. Other river barges owned in Buenos Aires are the Asia ex Earnock , Africa ex Meinwen , America ex Sterna, Ocea nia ex British Isles, and the Don Juan Vex Professor Koch. The last two were in exceptionally good shape when I saw them last a year or so ago. They are some of the last few survivors of the Age of Sail, still giving service and making money for someone.

Another row of old wooden ribs intrigued me, as I could not discover what ship she had been. So one day, while waiting for a steamer to enter port, I asked the launch boy (an old grizzled veteran of the wate1front who spoke no English) if he knew who she was. He told me she was &quot; kinkisconti. &quot; &quot; Kinkisconti?&quot; I said. &quot;What kind of a ship is a kinkisconti?&quot; &quot;That was her name, Senor. She was a British ship, &quot;he said in Spanish. 1 raid him to run me over to the wreck, pondering the while as to what he meant by &quot;kinkisconti. &quot; Then a solution dawned on me. Was she the big Bluenose four-masted barque King&#39;s County? That fin e ship had arrived in the River Plate about 1912, partially dismasted, and had stranded on the English Bank. So 1 asked the launch boy if he remembered how many masts this &quot;kinkisconti&quot; had, and he told me four, two square-rigged and t wo fore-and-aft rigged. That made her identity certain, for King&#39;s Cou nty had lost her mizzen-mast on her way down the Atlantic, had obtained a fore-and-aft rigged mizzen at Rio de Janeiro, and was rigged that way when she stranded on that gra veyard of the ships, the English Bank. She was later refloated, brought into the bay and condemned. We stopped the launch alongside the silent ribs of the old ship, standing up like skeleton fingers from the sea. There was nothing much to look at, just these old rotting ribs covered with green slime. But as I looked at them they recalled a memory picture to me. The bay and the wreck faded from my vision. I saw King&#39;s County again as I met her once in the South Atlantic. It was a sunny afternoon in the south-east trades. We were running north with the wind abaft our starboard beam, and ran under her lee. She was standing to the southward, closehauled on the port tack, her tall masts leaning to the urge of the trade wind, her white sails gleaming in the western sunshine, and her black hull glistening wet with flying spray as she tore along with a bone in her teeth. What a picture of sea beauty she made! And what a priceless mem01y picture she gave to recall! As a fronti spiece for this article in the 1957 Dog Watch about this diminishing fleet of ghosts, Captain Daniel had submitted a photograph of one of the hulks mentioned , the Wavertree. lt showed the vessel in her prime in the nineties lying in an anchor in San Francisco Bay. It is a good specimen ofT. H . Wilton&#39; s (Elite Studio) ship portraits, Telegraph Hill in the distance and a scow schooner slipping along under sail in th e middle background. The ship is port painted and strikingly handso me with sheer to her like a down -Easter. The sa me photograph has fami liar use opposite P age 344 in Lubbock&#39; s last of the Windjammers, Volume I.

This classic phoro of Wavenree f rom Caprain Daniel&#39;s arricle is rhe Xeroxed picrure Karl Kortum used in Buenos Aires. He had no way of knowing she still existed.

He went o n to na me other o ld sailing ships whose remains lay in the bay . An example of the Daniel style is in his account of the di scovery of the remains of a ship he had seen at sea years befo re:

Jn the north part of the bay some blackened wooden ribs of wrecks projected from the water. One was all that remained ofthe five-masted Yankee schooner Martha P. Small. She had come in with a cargo ofcoal and heavy weather damage lo hull and rigging about 1921. She was discharged and drydocked, but there was no cash to pay for her repairs, so she had been sold for breaking up. *See SH 19, p.8for more Thomist reflections.