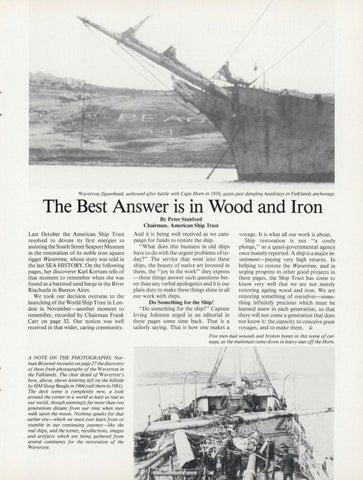 Wavertreefigurehead, unbowed after ba/lle with Cape Horn in 1910, gazes past dangling headstays in Falklands anchorage.

The Best Answer is in Wood and Iron By Peter Stanford Chairman, American Ship Trust Last October the American Ship Trust resolved to devote its first energies to assisting the South Street Seaport Museum in the restoration of its noble iron square rigger Wavertree, whose story was told in the last SEA HISTORY. On the following pages, her discoverer Karl Kortum tells of that moment to remember when she was found as a battered sand barge in the River Riachuela in Buenos Aires. We took our decision overseas to the launching of the World Ship Trust in London in November-another moment to remember, recorded by Chairman Frank Carr on page 32. Our notion was well received in that wider, caring community.

And it is being well received as we campaign for funds to restore the ship. &quot;What does this business in old ships have to do with the urgent problems of today?&quot; The service that went into these ships, the beauty of native art invested in them, the &quot;joy in the work&quot; they express -these things answer such questions better than any verbal apologetics and it is our plain duty to make these things shine in all our work with ships. Do Something for the Ship! &quot;Do something for the ship!&quot; Captain Irving Johnson urged in an editorial in these pages some time back. That is a sailorly saying. That is how one makes a

voyage. It is what all our work is about. Ship restoration is not &quot;a costly plunge,&quot; as a quasi-governmental agency once inanely reported. A ship is a major investment-paying very high returns. In helping to restore the Wavertree, and in urging progress in other good projects in these pages, the Ship Trust has come to know very well that we are not merely restoring ageing wood and iron. We are restoring something of ourselves-something infinitely precious which must be learned anew in each generation, so that there will not come a generation that does not know it: the capacity to conceive great voyages, and to make them. w

Five men had wounds and broken bones in this scene of carnage, as the mainmast came down in heavy seas off the Horn. A NOTE ON THE PHOTOGRAPHS: Norman Brouwer recounts on page 27 the discovery of these fresh photographs of the Wavertree in the Falklands. The clear detail of Wavertree&#39;s bow, above, shows lettering left on the hillside by HM Sloop Beagle in 1904 (still there in 1981). The deck scene is completely new, a look around the corner in a world at leas/ as real as our world, though seemingly far more than two generations dis/an/ from our time when men walk upon the moon. Nothing speaks for that earlier era-which we must ever learn from or stumble in our continuing journey-like the real ships, and /he scenes, recollections, images and artifacts which are being gathered from several continents for the restoration of the