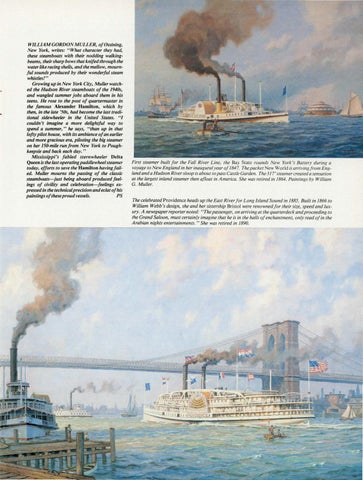 WILLIAM GORDON MULLER, of Ossining, New York, writes: &quot;What character they had, these steamboats with their nodding walkingbeams, their sharp bows that knifed through the water like racing shells, and the mellow, mournful sounds produced by their wonderful steam whistles!&quot; Growing up in New York City, Muller watched the Hudson River steamboats of the 1940s, and wangled summer jobs aboard them in his teens. He rose to the post of quartermaster in the famous Alexander Hamilton, which by then, in the late &#39;50s, had become the last traditional sidewheeler in the United States. &quot;I couldn&#39;t imagine a more delightful way to spend a summer, &quot; he says, &quot;than up in that lofty pilot house, with its ambience of an earlier and more gracious era, piloting the big steamer on her 150-mile run from New York to Poughkeepsie and back each day. &quot; Mississippi&#39;s fabled sternwheeler Delta Queen is the last operating paddlewheel steamer today, efforts to save the Hamilton having failed. Muller mourns the passing of the classic steamboats-just being aboard produced feelings of civility and celebration-feelings expressed in the technical precision and eclat of his PS paintings of these proud vessels.

First steamer built for the Fall River Line, the Bay State rounds New York&#39;s Battery during a voyage to New England in her inaugural year of 1847. The packe1 New World is arriving from England and a Hudson River sloop is about to pass Castle Garden. The 317&#39; s1eamer created a sensation as the largest inland steamer then afloat in America. She was retired in 1864. Paintings by William G. Muller. The celebrated Providence heads up the East River for Long ls/and Sound in 1885. Built in 1866 to William Webb&#39;s design, she and her sistership Bristol were renowned for their size, speed and lwcury. A newspaper reporter noted: &quot;The passenger, on arriving at the quarterdeck and proceeding to the Grand Saloon, must certainly imagine that he is in the halls of enchantment, only read of in the Arabian nights entertainments.&quot; She was retired in 1890.