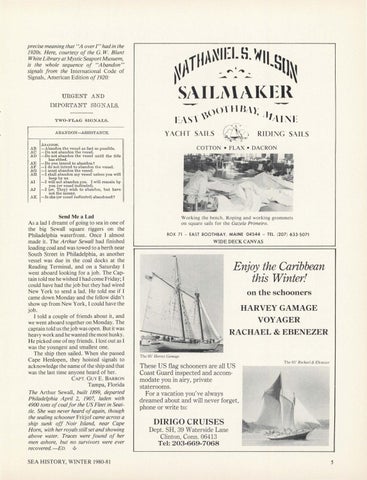 precise meaning that &quot;A over I&quot; had in the 1920s. Here, courtesy of the G. W. Blunt White Library at Mystic Seaport Musuem, is the whole sequence of &quot;A bandon&quot; signals from the International Code of Signals, American Edition of 1920:

-Is she (or vessel indicated) abandoned 1

Send Me a Lad As a lad I dreamt of going to sea in one of the big Sewall square riggers on the Philadelphia waterfront. Once I almost made it. The Arthur Sewall had finished loading coal and was towed to a berth near South Street in Philadelphia, as another vessel was due in the coal docks at the Reading Terminal, and on a Saturday I went aboard looking for a job. The Captain told me he wished I had come Friday; I could have had the job but they had wired New York to send a lad. He told me if I came down Monday and the fellow didn&#39;t show up from New York, I could have the job. I told a couple of friends about it, and we went aboard together on Monday. The captain told us the job was open. But it was heavy work and he wanted the most husky. He picked one of my friends . I lost out as I was the youngest and smallest one. The ship then sailed. When she passed Cape Henlopen, they hoisted signals to acknowledge the name of the ship and that was the last time anyone heard of her. CAPT. GUYE. BARRON

Tampa, Florida The Arthur Sewall, built 1899, departed Philadelphia April 2, 1907, laden with 4900 tons of coal for the US Fleet in Seattle. She was never heard of again, though the sealing schooner Fritjof came across a ship sunk off Nair Island, near Cape Horn, with her royals still set and showing above water. Traces were found of her men ashore, but no survivors were ever recovered. -ED. w SEA HISTORY, WINTER 1980-81

Enjoy the Caribbean this Winter! on the schooners

These US flag schooners are all US Coast Guard inspected and accommodate you in airy, private staterooms. For a vacation you&#39;ve always dreamed about and will never forget, phone or write to: