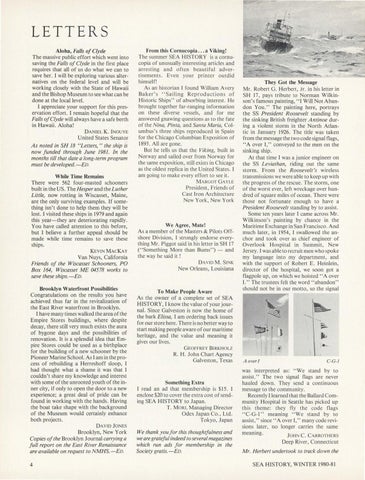 LETTERS Aloha, Falls of Clyde The massive public effort which went into saving the Falls of Clyde in the first place requires that all of us do what we can to save her. I will be exploring various alternatives on the federal level and will be working closely with the State of Hawaii and the Bishop Museum to see what can be done at the local level. I appreciate your support for this preservation effort. I remain hopeful that the Falls of Clyde will always have a safe berth in Hawaii. Aloha! DAN IEL K. INOUYE United States Senator As noted in SH 18 &quot;Letters,&quot; the ship is

now funded through June 1981. In the months till that date a long-term program must be developed. -ED. While Time Remains There were 562 four-masted schooners built in the US . The Hesper and the Luther Little, now rotting in Wiscasset, Maine, are the only surviving examples. If something isn&#39;t done to help them they will be lost. I visited these ships in 1979 and again this year-they are deteriorating rapidly. You have called attention to this before, but I believe a further appeal should be made while time remains to save these ships. KEVIN MACKAY Van Nuys, California

Friends of the Wiscasset Schooners, PO Box 164, Wiscasset ME 04578 works to save these ships. -ED. Brooklyn Waterfront Possibilities Congratulations on the results you have achieved thus far in the revitalization of the East River waterfront in Brooklyn. I have many times walked the area of the Empire Stores buildings, where despite decay, there still very much exists the aura of bygone days and the possibilities of renovation . It is a splendid idea that Empire Stores could be used as a birthplace for the building of a new schooner by the Pioneer Marine School. As I am in the process of rebuilding a H erreshoff sloop, I had thought what a shame it was that I couldn&#39;t share my knowledge and interest with some of the unrooted youth of the inner city, if only to open the door to a new experience; a great deal of pride can be found in working with the hands. Having the boat take shape with the background of the Museum would certainly enhance both projects. DAVID JONES Brooklyn, New York Copies of the Brooklyn Journal carrying a

full report on the East River Renaissance are available on request to NMHS. -ED. 4

From this Cornucopia ... a Viking! The summer SEA HISTORY is a cornucopia of unusually interesting articles and arresting and often beautiful advertisements. Even yo ur printer outdid himself! As an historian I found William Avery Baker&#39;s &quot;Sailing Reproduction s of Historic Ships&quot; of absorbing interest. He brought together far-ranging information on these diverse vessels, and for me answered gnawing questions as to the fate of the Nina, Pinta, and Santa Maria, Columbus&#39;s three ships reproduced in Spain for the Chicago Columbian Exposition of 1893 . All are gone. But he tells us that the Viking, built in Norway and sailed over from Norway for the same exposition, still exists in Chicago as the oldest replica in the United States. I am going to make every effort to see it. MARGOT GAYLE President, Fri ends of Cast Iron Architecture New York, New York

We Agree, Mate! As a member of the Masters &amp; Pilots Offshore Division, I strongly endorse everything Mr. Piggot said in his letter in SH 17 (&quot;Something More than Bums&quot;) - and the way he said it ! DAVID M. SINK New Orleans, Louisiana

To Make People A ware As the owner of a complete set of SEA HISTORY, I know the value of your journal. Since Galveston is now the home of the bark Elissa, I am ordering back issues for our store here. There is no better way to start making people aware of our maritime heritage, and the value and meaning it gives our lives . GEOFFREY BIRKHOLZ R. H. John Chart Agency Galveston, Texas

We thank you for this thoughtfulness and we are grate/ul indeed to several magazines which run ads for membership in the Society gratis.-ED.

They Got the Message Mr. Robert G. Herbert, Jr. in his letter in SH 17, pays tribute to Norman Wilkinson &#39;s famous painting, &quot; I Will Not Abandon You.&quot; The painting here, portrays the SS President Roosevelt standing by the sinking British freighter Antinoe during a violent storm in the North Atlantic in January 1926. The title was taken from the message the two code signal flags, &quot;A over I,&quot; conveyed to the men on the sinking ship. At that time I was a junior engineer on the SS Leviathan, riding out the same sto rm . From the Roosevelt&#39;s wireless transmissions we were able to keep up with the progress of the rescue. The storm, one of the worst ever, left wreckage over hundred of square miles of ocean. There were those not fortunate enough to have a President Roosevelt standing by to assist. Some ten years later I came across Mr. Wilkinson&#39;s painting by chance in the Maritime Exchange in San Francisco. And much later, in 1954, I swallowed the anchor and took over as chief engineer of Overlook Hospital in Summit, New Jersey. I was able to recruit men who spoke my language into my department, and with the support of Robert E. Heinlein, director of the hospital, we soon got a flagpole up , on which we hoisted &quot;A over I. &quot; The trustees felt the word &quot;abandon&quot; should not be in our motto, so the signal

was interpreted as: &quot;We stand by to assist.&quot; The two signal flags are never hauled down . They send a continuous message to the community. Recently I learned that the Ballard Community Hospital in Seattle has picked up this theme: they fly the code flags &quot;C-G-1&quot; meaning &quot;We stand by to assist,&quot; since &quot;A over I, &quot; many code revisions later, no longer carries the same meaning.

Mr. Herbert undertook to track down the SEA HISTORY, WINTER 1980-81