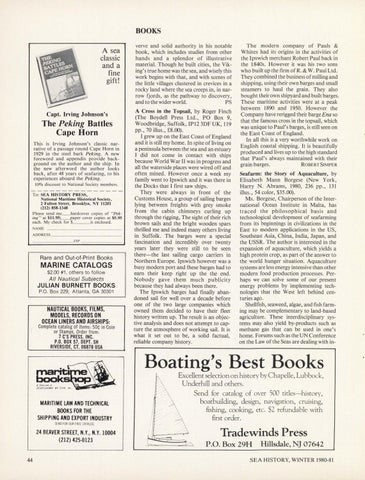 A sea classic and a fine gift!

The Peking Battles Cape Horn This is Irving Johnson's classic narrative of a passage round Cape Horn in 1929 in the steel bark Peking. A new foreword and appendix provide background on the author and the ship. In the new afterword the author look s back, after 48 years of seafaring, to his experiences aboard the Peking. 10% discount to National Society members.

MARINE CATALOGS $2.00 #1 , others to fol low All Nautical Subjects

verve and solid authority in his notable book, which includes studies from other hands and a splendor of illustrative material. Though he built cities, the Viking's true home was the sea, and wisely this work begins with that, and with scenes of the little villages clustered in crevices in a rocky land where the sea creeps in, in narrow fjords, as the pathway to discovery, and to the wider world. PS A Cross in the Topsail, by Roger Finch (The Boydell Press Ltd., PO Box 9, Woodbridge, Suffolk, IP12 3DF UK, 119 pp., 70 illus., ÂŁ8.00). I grew up on the East Coast of England and it is still my home. In spite of living on a peninsula between the sea and an estuary I did not come in contact with ships because World War II was in progress and all the waterside places were wired off and often mined. However once a week my family went to Ipswich and it was there in the Docks that I first saw ships. They were always in front of the Customs House, a group of sailing barges lying between freights with grey smoke from the cabin chimneys curling up through the rigging, The sight of their rich brown sails and the bright wooden spars thrilled me and indeed many others living in Suffolk. The barges were a special fascination and incredibly over twenty years later they were still to be seen there-the last sailing cargo carriers in Northern Europe. Ipswich however was a busy modern port and these barges had to earn their keep right up the the end. Nobody gave them much publicity because they had always been there. The Ipswich barges had finally abandoned sail for well over a decade before one of the two large companies which owned them decided to have their fleet history written up. The result is an objective analysis and does not attempt to capture the atmosphere of working sail. It is what it set out to be, a solid factual, reliable company history.

The modern company of Pauls & Whites had its origins in the activities of the Ipswich merchant Robert Paul back in the 1840s. However it was his two sons who built up the firm of R. & W. Paul Ltd. They combined the business of milling and shipping, using their own barges and small steamers to haul the grain. They also bought theirown shipyard and built barges. These maritime activities were at a peak between 1890 and 1950. However the Company have rerigged their barge Ena so that the famous cross in the topsail, which was unique to Paul's barges, is still seen on the East Coast of England. In all this is a very worthwhile work on English coastal shipping. It is beautifully produced and lives up to the high standard that Paul's always maintained with their ROBERT SIMPER grain barges. Seafarm: the Story of Aquaculture, by Elisabeth Mann Borgese (New York, Harry N. Abrams, 1980, 236 pp., 131 illus., 54 color, $35.00). Ms. Borgese, Chairperson of the International Ocean Institute in Malta, has traced the philosophical basis and technological development of seafarming from its beginnings in civilizations in the East to modern applications in the US, Southeast Asia, China, India, Japan, and the USSR. The author is interested in the expansion of aquaculture, which yields a high protein crop, as part of the answer to the world hunger situation. Aquaculture systems are less energy intensive than other modern food production processes. Perhaps we can solve some of our present energy problems by implementing technologies that the West left behind centuries ago. Shellfish, seaweed, algae, and fish farming may be complementary to land-based agriculture. These interdisciplinary systems may also yield by-products such as methane gas that can be used in one's home. Forums such as the UN Conference on the Law of the Seas are dealing with in-

SEND FOR OUR FREE CATALOG