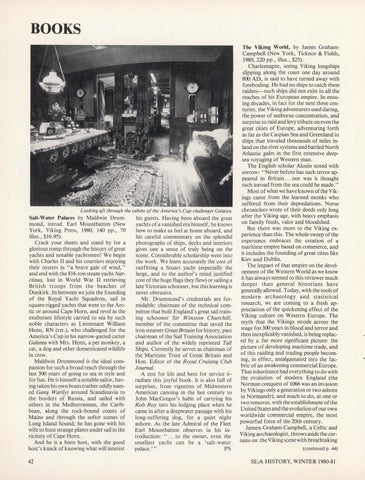 Looking aft through the cabins of the America's Cup challenger Galatea. Salt-Wa.ter Palaces by Maldwin Drumhis guests. Having been aboard the great mond, mtrod. Earl Mountbatten (New yachts of a vanished era himself he knows how to make us feel at home aboard and York, Viking Press, 1980, 140 pp., 70 illus., $16.95). his careful commentary on the spl~ndid C~ack your sheets and stand by for a photographs of ships, decks and interiors gives one a sense of truly being on the glonous romp through the history of great y~chts and notable yachtsmen! We begin scene. Considerable scholarship went into the work. We learn accurately the cost of with Charles II and his courtiers enjoying their oyst:rs in "a brave gale of wind," outfitting a Stuart yacht (especially the a?d end with. the 816-ton steam yach~A-'.arlarge, and to the author's mind justified c1s~~s, lost m World War II retnevmg cost of the huge flags they flew) or sailing a Bnt1s? troops from the beaches of late Victorian schooner, but this learning is Dunkirk. In between we join the founding never obtrusive. of the Royal Yacht Squadron, sail in Mr. Drummond's credentials are forsquare-rigged yachts that went to the Arcmidable: chairman of the technical comtic or aroun.d Cape Ho~n, and revel in the mittee that built England's great sail training schooner Sir Winston Churchill exuberant lifestyle earned to sea by such noble characters as Lieutenant William member of the committee that saved th~ Henn'. R,N (ret._), ~ho challenged for the iro~ steamer Great Britain for history, past chalfman of the Sail Training Association Amenca s.Cup m his narrow-gutted cutter Galatea with Mrs. Henn, a pet monkey, a and author of the widely reprinted Tall cat, a dog and other domesticated wildlife Ships. Currently he serves as chairman of in crew. the Maritime Trust of Great Britain and Hon. Editor of the Royal Cruising Club Maldwin Drummond is the ideal companion for such a broad reach through the Journal. last 300 years of going to sea in style and A zest for life and bent for service irradiate this joyful book. It is also full of for fun. He is himself a notable sailor, having taken his own boats (rather oddly namsurprises, from vignettes of Midwestern American canoing in the last century to ed Gang Warily) around Scandinavia to John MacGregor's habit of carrying his the borders of Russia, and sailed with Rob Roy into his lodging place when he others in the Mediterranean, the Caribcame in after a deepwater passage with his bean, along the rock-bound coasts of long-suffering dog, for a quiet night Maine and through the softer scenes of ashore. As the late Admiral of the Fleet Long Island Sound; he has gone with his wife to hunt strange plants under sail in the Earl Mountbatten observes in his introduction: " ... to the owner, even the vicinity of Cape Horn. And he is a born host, with the good smallest yacht can be a 'salt-water host's knack of knowing what will interest palace.'" PS

The Viking World, by James GrahamCampbell (New York, Ticknor & Fields, 1980, 220 pp., illus., $25). Charlemagne, seeing Viking longships slipping along the coast one day around 800 AD, is said to have turned away with foreboding. He had no ships to catch these raiders-such ships did not exist in all the reaches of his European empire. In ensuing decades, in fact for the next th ree centuries, the Viking adventurers used daring, the power of seaborne concentration, and surprise to raid and levy tribute on even the great cities of Europe, adventuring forth as far as the Caspian Sea and Greenland in ships that traveled thousands of miles inland on the river systems and battled North Atlantic gales in the first extensive deepsea voyaging of Western man. The English scholar Alcuin noted with sorrow: ''Never before has such terror appeared in Britain ... nor was it thought such inroad from the sea could be made.'' Most of what we have known of the Vikings came from the learned monks who suffered from their depredations. Norse chroniclers wrote of their deeds only long after the Viking age, with heavy emphasis on family feuds, valor and bloodshed. But there was more to the Viking experience than this. The whole sweep of the experience embraces the creation of a maritime empire based on commerce, and it includes the founding of great cities like Kiev and Dublin. The impact of that empire on the development of the Western World as we know it has always seemed to this reviewer much deeper than general historians have generally allowed. Today, with the tools of modern archaeology and statistical research, we are coming to a fresh appreciation of the quickening effect of the Viking culture on Western Europe. The myth that the Vikings strode across the stage for 300 years in blood and terror and then inexplicably vanished, is being replaced by a far more significant picture: the picture of developing maritime trade, and of this raiding and trading people becoming, in effect, amalgamated into the facbric of an awakening commercial Europe. That inheritance had everything to do with the evolution of modern England (the Norman conquest of 1066 was an invasion by Vikings only a generation or two ashore in Normandy), and much to do, at one or two removes, with the establishment of the United States and the evolution of our own worldwide commercial empire, the most powerfrul force of the 20th century. Jamess Graham-Campbell, a Celtic and Viking atrchaeologist, throws aside the curtains on 1the Viking scene with breathtaking