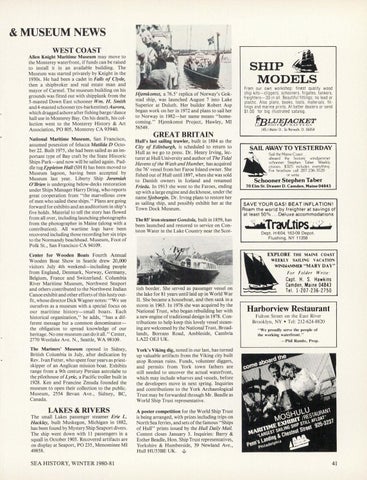 &amp; MUSEUM NEWS WEST COAST Allen Knight Maritime Museum may move to the Monterey waterfront, if funds can be raised to install it in a n available building. The Museum was started privately by Knight in the 1930s. He had been a cadet in Falls of Clyde, then a shipbroker and real estate man and mayor of Carmel. The museum building on his grounds was fitted out with shipplank from the 5-masted Down East schooner Wm. H. Smith and 4-masted schooner (ex-barkentine) Aurora, which dragged ashore after fishing barge/ dance hall use in Monterey Bay. On his death , his collection went to the Monterey History &amp; Art Association, PO 805, Monterey CA 93940. National Maritime Museum, San Francisco, assumed posession of felucca Matilda D October 22. Built 1975, she had been sailed as an important type of Bay craft by the State Historic Ships Park-and now will be sailed again . Paddle tug Eppleton Hall (SH 8) has been moved to Museum lagoon , having been accepted by Museum last year. Liberty Ship Jeremiah O&#39;Brien is undergoing below-decks restoration under Ships Manager Harry Dring, who reports great cooperation from &quot;the marvellous crew of men who sailed these ships.&#39;&#39; Plans are going forward for exhibits and an auditorium in ship&#39;s five holds. Material to tell the story has flowed from all over, including launching photographs from the photographer in Maine (along with a contribution). All wartime logs have been recovered including those recording her six trips to the Normandy beachhead. Museum, Foot of Polk St., San Francisco CA 94109.

City of Edinburgh, is scheduled to return to Hull as we go to press. Dr. Henry Irving, lecturer at Hull University and author of The Tidal Havens of the Wash and Humber, has acquired the 76&#39; vessel from her Faroe Island owner. She fished out of Hull until 1897, when she was sold to Danish owners in Iceland and renamed Frieda. In 1913 she went to the Faroes, ending up with a large engine and deck house, under the name Sjoborgin. Dr. Irving plans to restore her as sailing ship, and possibly exhibit her at the Town Dock Museum . The 85&#39; iron steamer Gondola, built in 1859, has been launched and restored to service on Coniston Water in the Lake Country near the Scot-

SAIL AWAY TO YESTERDAY Sail the Maine Coast. . aboard the his toric windjammer schooner Stephen Taber. Weekly cruises. $325 includes everything. For brochure call 207 -236-3520 or \.Vfite .

SAVE YOUR GAS! BEAT INFLATION! Roam the world by freighter at savings of at least 50% .. . De luxe accommodations

tish border. She served as passenger vessel on the lake for 81 years until laid up in World War II. She became a houseboat, and then sank in a storm in 1963 . In 1976 she was acquired by the National Trust, who began rebuilding her with a new engine of traditional design in 1978. Contributions to help keep this lovely vessel steaming are welcomed by the National Trust, Broadlands, Borrans Road, Ambleside, Cambria LA220EJ UK .

The Mariners&#39; Museum opened in Sidney, British Columbia in July, after dedication by Rev. Ivan Futter, who spent four years as priestskipper of an Anglican mission boat. Exhibits range from a 9th century Persian astrolabe to the pilothouse of Lyric, a Pacific troller built in 1928. Ken and Francine Zmuda founded the museum to open their collection to the public. Museum, 2554 Bevan Ave., Sidney, BC, Canada.

York&#39;s Viking dig, noted in our last, has turned up valuable artifacts from the Viking city built atop Roman ruins . Funds, volunteer diggers, and permits from York town fathers are still needed to uncover the actual waterfront, which may include wharves and vessels, before the developers move in next spring. Inquiries and contributions to the York Archaeological Trust may be forwarded through Mr. Beadle as World Ship Trust representative.

Center for Wooden Boats Fourth Annual Wooden Boat Show in Seattle drew 20,000 visitors July 4th weekend-including people from England, Denmark, Norway, Germany, Belgium, France and Switzerland. Columbia River Maritime Museum, Northwest Seaport and others contributed to the Northwest Indian Canoe exhibit and other efforts of this lusty outfit, whose director Dick Wagner notes: &quot;We see ourselves as a museum with a special focus on our maritime history-small boats . Each historical organization,&quot; he adds, &quot; has a different message but a common denominatorthe obligation to spread knowledge of our heritage. No one museum can do it all.&quot; Center, 2770 Westlake Ave. N., Seattle, WA 98109.

The small Lakes passenger steamer Erie L. Hackley, built Muskegon, Michigan in 1882, has been found by Mystery Ship Seaport divers. The ship went down with 11 passengers in a squall in October 1903 . Recovered artifacts are on display at Seaport, PO 235, Menominee MI 49858.