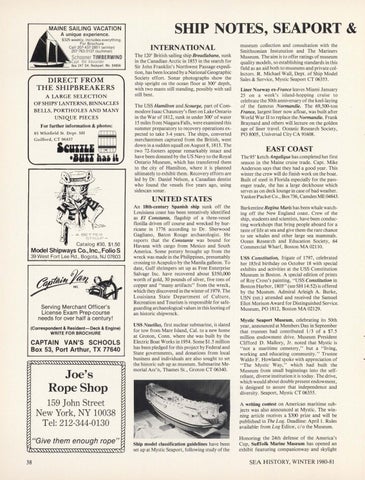 SHIP NOTES, SEAPORT & INTERNATIONAL The 120' British sailing ship Breadlabane, sunk in the Canadian Arctic in 1853 in the search for Sir John Franklin's Northwest Passage expedition, has been located by a National Geographic Society effort. Sonar photographs show the ship upright on the ocean floor at 300' depth, with two masts still standing, possibly with sail still bent. The USS Hamilton and Scourge, part of Commodore Isaac Chauncey's fleet on Lake Ontario in the War of 1812, sunk in under 300' of water 15 miles from Niagara Falls, were examined this summer preparatory to recovery operations expected to take 3-4 years. The ships, converted merchantmen captured from the British, went down in a sudden squall on August 8, 1813. The two 72-footers appear remarkably intact and have been donated by the US Navy to the Royal Ontario Museum, which has transferred them to the city of Hamilton, where it is planned ultimately to exhibit them . Recovery efforts are led by Dr. Daniel Nelson, a Canadian dentist who found the vessels five years ago, using sidescan sonar.

An 18th-century Spanish ship sunk off the Louisiana coast has been tentatively identified as El Constante, flagship of a three-vessel flotilla driven off course and wrecked by hurricane in 1776 according to Dr. Sherwood Gagliano, Baton Rouge archaeologist. He reports that the Constante was bound for Havana with cargo from Mexico and South America. Some pottery brought up from the wreck was made in the Philippines, presumably crossing to Acapulco by the Manila galleon. To date, Gulf shrimpers set up as Free Enterprise Salvage Inc. have recovered about $350,000 worth of gold, 30 pounds of silver, five tons of copper and "many artifacts" from the wreck, which they discovered in the winter of 1979. The Louisiana State Department of Culture, Recreation and Tourism is responsible for safeguarding archaeological values in this looting of an historic shipwreck . USS Nautilus, first nuclear submarine, is slated for tow from Mare Island, Cal. to a new home at Groton, Conn. where she was built by the Electric Boat Works in 1954. Some$1 .5 million has been pledged for this project by Federal and State governments, and donations from local business and individuals are also sought to set the historic sub up as museum. Submarine Memorial Ass'n, Thames St., Groton CT 06340.

Liner Norway ex-France leaves Miami January 25 on a week 's island-hopping cruise to celebrate the 50th anniversary of the keel-laying of the famous Normandie. The 69,500-ton France, largest liner now afloat, was built after World War II to replace theNormandie. Frank Braynard and others will lecture on the golden age of liner travel. Oceanic Research Society, PO 8005, Universal City CA 91608.

EAST COAST The 95' ketch Angelique has completed her first season in the Maine cruise trade. Capt. Mike Anderson says that they had a good year. This winter the crew will do finish work on the boat. Built of steel in Florida especially for the passenger trade, she has a large deckhouse which serves as on deck lounge in case of bad weather. Yankee Packet Co., Box 736, Camden ME04843. BarkentineRegina Maris has been whale watching off the New England coast. Crew of the ship, students and scientists, have been conducting workshops that bring people aboard for a taste of life at sea and give them the rare chance to see whales and other large sea mammals. Ocean Research and Education Society, 64 Commercial Wharf, Boston MA 021 !0. USS Constitution, frigate of 1797, celebrated her 183rd birthday on October 18 with special exhibits and activities at the USS Constitution Museum in Boston. A special edition of prints of Roy Cross's painting, "USS Constitution in Boston Harbor, 1803" (see SH 14:52) is offered by the Museum. Admiral Arleigh A . Burke, USN (ret.) attended and received the Samuel Eliot Morison Award for Distinguished Service. Museum, PO 1812, Boston MA 02129. Mystic Seaport Museum, celebrating its 50th year, announced at Members Day in September that trustees had contributed 1/ 3 of a $7 .5 million endowment drive. Museum President Clifford D. Mallory, Jr. noted that Mystic is "not a maritime cemetery," but a "living, working and educating community." Trustee Waldo F. Howland spoke with appreciation of "The Mystic Way, " which had built the Museum from small beginnings into the self. reliant, diverse institution it is today. The drive, which would about double present endowment, is designed to assure that independence and diversity. Seaport, Mystic CT 06355. A writing contest on American maritime subjects was also announced at Mystic. The winning article receives a $300 prize and will be publishecd in The Log. Deadline: April 1. Rules available: from Log Editor, c/ o the Museum.

Ship model classification guidelines have been set up at Mystic Seaport, following study of the

museum collection and consultation with the Smithsonian Instutution and The Mariners Museum. The aim is to offer ratings of museum quality models, so establishing standards in this field as an aid both to museums and private collectors. R . Michael Wall, Dept. of Ship Model Sales & Service, Mystic Seaport CT 06355.

Honoring the 24th defense of the America's Cup, Suffolk Marine Museum has opened an exhibit featuring companionway and skylight