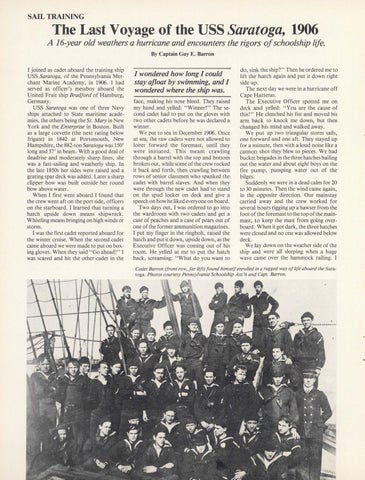 The Last Voyage of the USS Saratoga, 1906 A 16-year old weathers a hurricane and encounters the rigors of schoolship life. By Captain Guy E. Barron I joined as cadet aboard the training ship USS Saratoga, of the Pennsylvania Merchant Marine Academy, in 1906. I had served as officer&#39;s messboy aboard the United Fruit ship Bradford of Hamburg, Germany. USS Saratoga was one of three Navy ships attached to State maritime academies, the others being the St. Mary in New York and the Enterprise in Boston. Built as a large corvette (the next rating below frigate) in 1842 at Portsmouth, New Hampshire, the 882-ton Saratoga was 150&#39; long and 37&#39; in beam. With a good deal of deadrise and moderately sharp lines, she was a fast-sailing and weatherly ship. In the late 1850s her sides were raised and a grating spar deck was added . Later a sharp clipper bow was built outside her round bow above water. When I first went aboard I found that the crew went aft on the port side, officers on the starboard . I learned that turning a hatch upside down means shipwreck. Whistling means bringing on high winds or storm. I was the first cadet reported aboard for the winter cruise. When the second cadet came aboard we were made to put on boxing gloves. When they said &quot;Go ahead!&quot; I was scared and hit the other cadet in the

I wondered how long I could stay afloat by swimming, and I wondered where the ship was. face, making his nose bleed. They raised my hand and yelled: &quot;Winner!&quot; The second cadet had to put on the gloves with two other cadets before he was declared a winner. We put to sea in December 1906. Once at sea, the raw cadets were not allowed to loiter forward the foremast, until they were initiated. This meant crawling through a barrel with the top and bottom broken out, while some of the crew rocked it back and forth, then crawling between rows of senior classmen who spanked the cadet with barrel staves. And when they were through the new cadet had to stand on the spud locker on deck and give a speech on how he liked everyone on board. Two days out, I was ordered to go into the wardroom with two cadets and get a case of peaches and a case of pears out of one of the former ammunition magazines . I put my finger in the ringbolt, raised the hatch and put it down, upside down, as the Executive Officer was coming out of his room. He yelled at me to put the hatch back, screaming: &quot;What do you want to

do, sink the ship?&quot; Then he ordered me to lift the hatch again and put it down right side up. The next day we were in a hurricane off Cape Hatteras. The Executive Officer spotted me on deck and yelled: &quot;You are the cause of this!&quot; He clenched his fist and moved his arm back to knock me down, but then changed his mind and walked away. We put up two triangular storm sails, one forward and one aft. They stayed up for a minute, then with a loud noise like a cannon shot they blew to pieces. We had bucket brigades in the three hatches bailing out the water and about eight boys on the fire pump, pumping water out of the bilges. Suddenly we were in a dead calm for 20 to 30 minutes. Then the wind came again, in the opposite direction. Our mainstay carried away and the crew worked for several hours rigging up a hawser from the foot of the foremast to the top of the mainmast, to keep the mast from going overboard. When it got dark, the three hatches were closed and no one was allowed below deck. We lay down on the weather side of the ship and were all sleeping when a huge wave came over the hammock railing. I