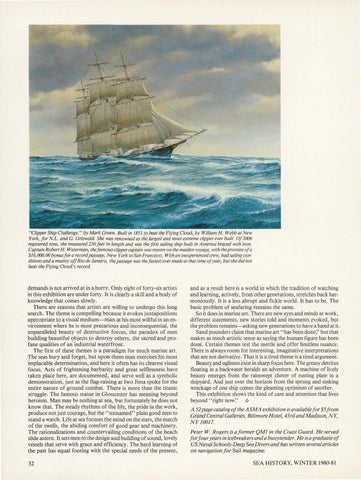 "Clipper Ship Challenge," by Mark Green. Built in 1851 to beat the Flying Cloud, by William H. Webb al New York, for N.L. and G. Griswold. She was renowned as the larges/ and most extreme clipper ever built. Of 2006 registered tons, she measured 230feet in length and was the first sailing ship built in America braced with iron. Captain Robert H. Waterman, the famous clipper captain was master on the maiden voyage, with the promise ofa $10, 000. 00 bonus for a record passage, New York to San Francisco. With an inexperienced crew, bad sailing conditions and a mutiny off Rio de Janeiro, the passage was the fastest ever made at that time ofyear, but she did not beat the Flying Cloud's record.

demands is not arrived at in a hurry. Only eight of forty-six artists in this exhibition are under forty. It is clearly a skill and a body of knowledge that comes slowly. There are reasons that artists are willing to undergo this long search. The theme is compelling because it evokes juxtapositions appropriate to a visual medium-man at his most willful in an environment where he is most precarious and inconsequential, the unparalleled beauty of destructive forces, the paradox of men building beautiful objects to destroy others, the sacred and profane qualities of an industrial waterfront. The first of these themes is a paradigm for much marine art. The seas bury and forget, but upon them man exercises his most implacable determination, and here it often has its clearest visual focus. Acts of frightening barbarity and great selflessness have taken place here, are documented, and serve well as a symbolic demonstration, just as the flag-raising at Iwo Jima spoke for the entire nature of ground combat. There is more than the titanic struggle. The famous statue in Gloucester has meaning beyond heroism. Man may be nothing at sea, but fortunately he does not know that. The steady rhythms of the life, the pride in the work, produce not just courage, but the "unnamed" plain good men to stand a watch. Life at sea focuses the mind on the stars, the march of the swells, the abiding comfort of good gear and machinery. The rationalizations and countervailing conditions of the beach slide astern. It sets men to the design and building of sound, lovely vessels that serve with grace and efficiency. The hard learning of the past has equal footing with the special needs of the present,

and as a result here is a world in which the tradition of watching and learning, actively, from other generations, stretches back harmoniously. It is a less abrupt and fickle world. It has to be. The basic problem of seafaring remains the same. So it does in marine art. There are new eyes and minds at work, different statements, new stories told and moments evoked, but the problem remains-asking new generations to have a hand at it. Sand pounders claim that marine art "has been done:' but that makes as much artistic sense as saying the human figure has been done. Certain themes test the mettle and offer limitless nuance. There is always room for interesting, imaginative interpretations that are not derivative. That it is a tired theme is a tired argument. Beauty and ugliness exist in sharp focus here. The greasy detritus floating in a backwater heralds an adventure. A machine of lively beauty emerges from the rainswept clutter of rusting plate in a shipyard. And just over the horizon from the sprung and sinking wreckage of one ship comes the gleaming optimism of another. This exhibition shows the kind of care and attention that lives beyond "right now:' w

A 52 page catalog of the ASMA exhibition is availablefor $5 from Grand Central Galleries, Biltmore Hotel, 43rd and Madison, NY, NY 10017.

Peter W. Rogers is a former QMJ in the Coast Guard. He served for four years in icebreakers and a buoytender. He is a graduate of US Naval Schools-Deep Sea Divers and has written several articles on navigation for Sail magazine. SEA HISTORY, WINTER 1980-81