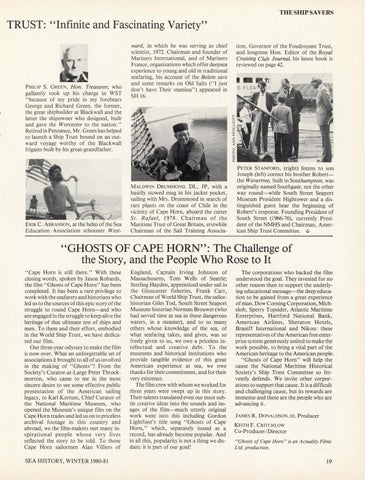 PHILIP S. GREEN, Hon. Treasurer, who gallantly took up his charge in WST &quot;because of my pride in my forebears George and Richard Green, the former, the great shipbuilder at Blackwall and the latter the shipowner who designed, built and gave the Worcester to the nation.&quot; Retired in Penzance, Mr. Green has helped to launch a Ship Trust bound on an outward voyage worthy of the Blackwall frigates built by his great-grandfather.

ward, in which he was serving as chief scientist, 1972. Chairman and founder of Mariners International, and of Mariners France, organizations which offer deepsea experience to young and old in traditional seafaring, his account of the Belem save and some remarks on Old Salts (&quot;I just don&#39;t have Their stamina&quot;) appeared in SH 16.

tion, Governor of the Foudroyant Trust, and longtime Hon. Editor of the Royal Cruising Club Journal, his latest book is reviewed on page 42.

.__. ERIK c. ABRANSON, at the helm of the Sea Education Association schooner West-

MALDWIN DRUMMOND, DL, JP, with a hastily stowed mug in his jacket pocket, sailing with Mrs. Drummond in search of rare plants on the coast of Chile in the vicinity of Cape Horn, aboard the cutter St. Rafael, 1978. Chairman of the Maritime Trust of Great Britain, erstwhile Chairman of the Sail Training Associa-

&#39;&#39;GHOSTS OF CAPE HORN&#39;&#39;: The Challenge of the Story, and the People Who Rose to It &quot;Cape Horn is still there.&quot; With these closing words, spoken by Jason Robards, the film &quot;Ghosts of Cape Horn&quot; has been completed. It has been a rare privilege to work with the seafarers and historians who led us to the sources of this epic story of the struggle to round Cape Horn-and who are engaged in the struggle to keep alive the heritage of that ultimate test of ships and men. To them and their effort, embodied in the World Ship Trust, we have dedicated our film. Our three-year odyssey to make the film is now over. What an unforgettable set of associations it brought to all of us involved in the making of &quot;Ghosts&quot;! From the Society&#39;s Curator-at-Large Peter Throckmorton, who came to me in the most sincere desire to see some effective public presentation of the American sailing legacy, to Karl Kortum, Chief Curator of the National Maritime Museum, who opened the Museum&#39;s unique files on the Cape Horn trades and Jed us on to priceless archival footage in this country and abroad, we the film-makers met many inspirational people whose very li ves reflected the story to be told. To those Cape Horn sailormen Alan Villiers of SEA HISTORY, WINTER 1980-81

England, Captain Irving Johnson of Massachusetts, Tom Wells of Seattle; Sterling Hayden, apprenticed under sail in the Gloucester fisheries, Frank Carr, Chairman of World Ship Trust, the sailorhistorian Giles Tod, South Street Seaport Museum historian Norman Brouwer (who had served time at sea in these dangerous waters, in a steamer), and to so many others whose knowledge of the sea, of what seafaring takes, and gives, was so freely given to us, we owe a priceless intellectual and creative debt. To the museums and historical institutions who provide tangible evidence of this great American experience at sea, we owe thanks for their commitment, and for their very existence. The film crew with whom we worked for three years were swept up in this story. Their talents translated even our must subtle creative ideas into the sounds and images of the film-much utterly original work went into this including Gordon Lightfoot&#39;s title song &quot;Ghosts of Cape Horn,&quot; which, separately issued as ·a record, has already become popular. And in all this, popularity is not a thing we disdain: it is part of our goal!

The corporations who backed the film understood the goal. They invested for no other reason than to support the underlying educational message-the deep education to be gained fr.om a great experience of man. Dow Corning Corporation, Michelob, Sperry Topsider, Atlantic Maritime Enterprises, Hartford National Bank, American Airlines, Sheraton Hotels, Braniff International and Nikon: these representatives of the American free enterprise system generously united to make the work possible, to bring a vital part of the American heritage to the American people. &quot;Ghosts of Cape Horn&quot; will help the cause the National Maritime Historical Society&#39;s Ship Trust Committee so fervently defends. We invite other corporations to support that cause. It is a difficult and challenging cause, but its rewards are immense and these are the people who are advancing it. JAMES R. DONALDSON, Ill, Producer KEITH F. CRITCHLOW Co-Producer/ Director &quot;Ghosts of Cape Horn&quot; is an Actuality Films Ltd. production.