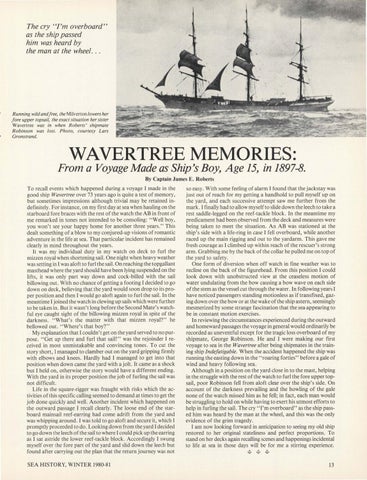 The cry "I'm overboard" as the ship passed him was heard by the man at the wheel . ..

From a Voyage Made as Ship's Boy, Age 15, in 1897-8. By Captain James E. Roberts To recall events which happened during a voyage I made in the good ship Wavertree over 73 years ago is quite a test of memory, but sometimes impressions although trivial may be retained indefinitely. For instance, on my first day at sea when hauling on the starboard fore braces with the rest of the watch the AB in front of me remarked in tones not intended to be consoling: "Well boy, you won't see your happy home for another three years." This dealt something of a blow to my conjured-up visions of romantic adventure in the life at sea. That particular incident has remained clearly in mind throughout the years. It was my individual duty in my watch on deck to furl the mizzen royal when shortening sail. One night when heavy weather was setting in I was aloft to furl the sail. On reaching the topgallant masthead where the yard should have been lying suspended on the lifts, it was only part way down and cock-billed with the sail billowing out. With no chance of getting a footing I decided to go down on deck, believing that the yard would soon drop to its proper position and then I would go aloft again to furl the sail. In the meantime I joined the watch in clewing up sails which were further to be taken in. But it wasn't long before the Second Mate's watchful eye caught sight of the billowing mizzen royal in spite of the darkness. "What's the matter with that mizzen royal?" he bellowed out. "Where's that boy?" My explanation that I couldn'tget on the yard served to no purpose. "Get up there and furl that sail!" was the rejoinder I received in most unmistakable and convincing tones. To cut the story short, I managed to clamber out on the yard gripping firmly with elbows and knees. Hardly had I managed to get into that position when down came the yard with a jolt. It came as a shock but I held on, otherwise the story would have a different ending. With the yard in its proper position the job of furling the sail was not difficult. Life in the square-rigger was fraught with risks which the activities of this specific calling seemed to demand at times to get the job done quickly and well. Another incident which happened on the outward passage I recall clearly. The loose end of the starboard mainsail reef-earring had come adrift from the yard and was whipping around. I was told to go aloft and secure it, which I promptly proceeded to do. Looking down from the yard I decided to go down the leech of the sail to where I could pick up the earring as I sat astride the lower reef-tackle block . Accordingly I swung myself over the fore part of the yard and slid down the leech but found after carrying out the plan that the return journey was not SEA HISTORY, WINTER 1980-81

so easy. With some feeling of alarm I found that the jackstay was just out of reach for my getting a handhold to pull myself up on the yard, and each successive attempt saw me further from the mark. I finally had to allow myself to slide down the leech to take a rest saddle-legged on the reef-tackle block. In the meantime my predicament had been observed from the deck and measures were being taken to meet the situation. An AB was stationed at the ship's side with a life-ring in case I fell overboard, while another raced up the main rigging and out to the yardarm. This gave me fresh courage as I climbed up within reach of the rescuer's strong arm. Grabbing me by the back of the collar he pulled me on top of the yard to safety. One form of diversion when off watch in fine weather was to recline on the back of the figurehead. From this position I could look down with unobstructed view at the ceaseless motion of water undulating from the bow causing a bow wave on each side of the stem as the vessel cut through the water. In following years I have noticed passengers standing motionless as if transfixed, gazing down over the bow or at the wake of the ship astern, seemingly mesmerized by some strange fascination that the sea appearing to be in constant motion exercises. In reviewing the circumstances experienced during the outward and homeward passages the voyage in general would ordinarily be recorded as uneventful except for the tragic loss overboard of my shipmate, George Robinson. He and I were making our first voyage to sea in the Wavertree after being shipmates in the training ship Indefatigable. When the accident happened the ship was running the easting down in the "roaring forties" before a gale of wind and heavy following sea. Although in a position on the yard close in to the mast, helping in the struggle with the rest of the watch to furl the fore upper topsail, poor Robinson fell from aloft clear over the ship's side. On account of the darkness prevailing and the howling of the gale none of the watch missed him as he fell; in fact, each man would be struggling to hold on while having to exert his utmost efforts to help in furling the sail. The cry "I'm overboard" as the ship passed him was heard by the man at the wheel, and this was the only evidence of the grim tragedy. I am now looking forward in anticipation to seeing my old ship restored to her original stateliness and perfect proportions. To stand on her decks again recalling scenes and happenings incidental to life at sea in those days will be for me a stirring experience.