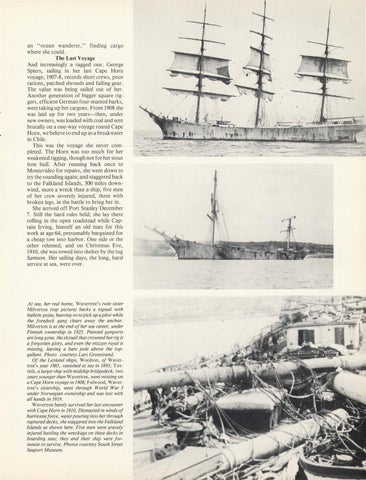 an "ocean wanderer," finding cargo where she could. The Last Voyage And increasingly a ragged one. George Spiers, sailing in her last Cape Horn voyage, 1907-8, records short crews, poor rations, patched shrouds and failing gear. The value was being sailed out of her. Another generation of bigger square riggers, efficient German four-masted barks, were taking up her cargoes. From 1908 she was laid up for two years-then, under new owners, was loaded with coal and sent brutally on a one-way voyage round Cape Horn, we believe to end up as a breakwater in Chile. This was the voyage she never completed. The Horn was too much for her weakened rigging, though not for her stout iron hull. After running back once to Montevideo for repairs, she went down to try the rounding again; and staggered back to the Falkland Islands, 300 miles downwind, more a wreck than a ship, five men of her crew severely injured, three with broken legs, in the battle to bring her in. She arrived off Port Stanley December 7. Still the hard rules held; she lay there rolling in the open roadstead while Captain Irving, himself an old man for this work at age 64, presumably bargained for a cheap tow into harbor. One side or the other relented, and on Christmas Eve, 1910, she was .towed into shelter by the tug Samson. Her sailing days, the long, hard service at sea, were over.

At sea, her real home, Wavertree's twin sister Milverton (top picture) backs a topsail with balletic poise, heaving-to to pick up a pilot while the foredeck gang clears away the anchor. Milverton is at the end of her sea career, under Finnish ownership in 1925. Painted gunports are long gone, the skysail that crowned her rig is a forgotten glory, and even the mizzen royal is missing, leaving a bare pole above the topgallant. Photo courtesy Lars Gronstrand. Of the Leyland ships, Woolton, of Wavertree's year 1885, vanished at sea in 1893; Toxteth, a larger ship with midship bridgedeck, two years younger than Wavertree, went missing on a Cape Horn voyage in 1908; Fulwood, Wavertree's sistership, went through World War I under Norwegian ownership and was lost with all hands in 1919. Wavertree barely survived her last encounter with Cape Horn in 1910. Dismasted in winds of hurricaneforce, water pouring into her through ruptured decks, she staggered into the Falkland Islands as shown here. Five men were gravely injured battling the wreckage on these decks in boarding seas; they and their ship were fortunate to survive. Photos courtesy South Street Seaport Museum.