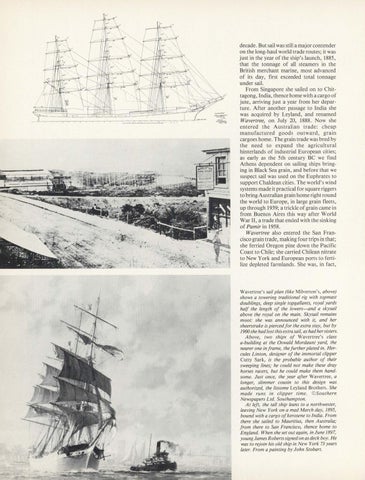 decade. But sail was still a major contender on the long-haul world trade routes; it was just in the year of the ship's launch, 1885, that the tonnage of all steamers in the British merchant marine, most advanced of its day, first exceeded total tonnage under sail. From Singapore she sailed on to Chittagong, India, thence home with a cargo of jute, arriving just a year from her departure. After another passage to India she was acquired by Leyland, and renamed Wavertree, on July 20, 1888. Now she entered the Australian trade: cheap manufactured goods outward, grain cargoes home. The grain trade was bred by the need to expand the agricultural hinterlands of industrial European cities; as early as the 5th century BC we find Athens dependent on sailing ships bringing in Black Sea grain, and before that we suspect sail was used on the Euphrates to support Chaldean cities. The world's wind systems made it practical for square riggers to bring Australian grain home right round the world to Europe, in large grain fleets, up through 1939; a trickle of grain came in from Buenos Aires this way after World War II, a trade that ended with the sinking of Pamir in 1958. Wavertree also entered the San Francisco grain trade, making four trips in that; she ferried Oregon pine down the Pacific Coast to Chile; she carried Chilean nitrate to New York and European ports to fertilize depleted farmlands. She was, in fact,

Wavertree' s sail plan (like Milverton' s, above) shows a towering traditional rig with topmast doublings, deep single topgallants, royal yards half the length of the lowers-and a skysail above the royal on the main. Skysail remains moot: she was announced with it, and her sheers/rake is pierced for the extra stay, but by 1900 she had lost this extra sail, as had her sisters. Above, two ships of Wavertree's class a-building at the Oswald Mordaunt yard, the nearer one in frame, the further plated in. Hercules Linton, designer of the immortal clipper Cutty Sark, is the probable author of their sweeping lines; he could not make these dray horses racers, but he could make them handsome. Just once, the year after Wavertree, a longer, slimmer cousin to this design was authorized, the lissome Leyland Brothers. She made runs in clipper time. ÂŠ Southern Newspapers Ltd. Southampton. At left, the tall ship leans to a northwester, leaving New York on a mad March day, 1895, bound with a cargo of kerosene to India. From there she sailed to Mauritius, then Australia; from there to San Francisco, thence home to England. When she set out again, in June 1897, young James Roberts signed on as deck boy. He was to rejoin his old ship in New York 73 years later. From a painting by John Stobart.