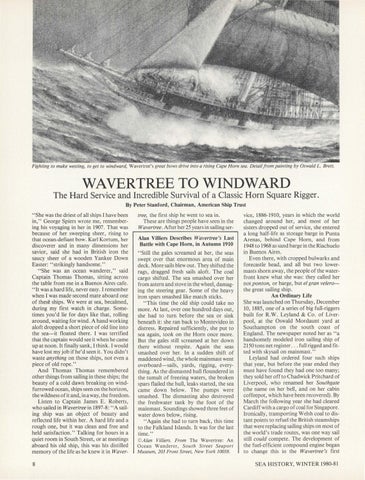 Fighting to make westing, to get to windward, Wavertree's great bows drive into a rising Cape Horn sea. Detail from painting by Oswald L. Brett.

"She was the driest of all ships I have been in," George Spiers wrote me, remembering his voyaging in her in 1907. That was because of her sweeping sheer, rising to that ocean-defiant bow. Karl Kortum, her discoverer and in many dimensions her savior, said she had in British iron the saucy sheer of a wooden Yankee Down Easter: ''strikingly handsome.'' "She was an ocean wanderer," said Captain Thomas Thomas, sitting across the table from me in a Buenos Aires cafe. "It was a hard life, never easy. I remember when I was made second mate aboard one of thes~ ships. We were at sea, becalmed, during my first watch in charge. Sometimes you'd lie for days like that, rolling around, waiting for wind. A hand working aloft dropped a short piece of old line into the sea-it floated there. I was terrified that the captain would see it when he came up at noon. It finally sank, I think. I would have lost my job if he'd seen it. You didn't waste anything on those ships, not even a piece of old rope." And Thomas Thomas remembered other things from sailing in these ships; the beauty of a cold dawn breaking on windfurrowed ocean, ships seen on the horizon, the wildness of it and, ina way, the freedom . Listen to Captain James E. Roberts, who sailed in Wavertreein 1897-8: "A sailing ship was an object of beauty and reflected life within her. A hard life and a rough one, but it was clean and free and held satisfaction." Talking for hours in a quiet room in South Street, or at meetings aboard his old ship, this was his distilled memory of the life as he knew it in Waver-

tree, the first ship he went to sea in. These are things people have seen in the Wavertree. After her25 years in sailingserAlan Villiers Describes Wavertree's Last Battle with Cape Horn, in Autumn 1910

"Still the gales screamed at her, the seas swept over that enormous area of main deck. More sails blew out. They shifted the rags, dragged fresh sails aloft. The coal cargo shifted. The sea smashed over her from astern and stove in the wheel, damaging the steering gear. Some of the heavy iron spars smashed like match sticks. "This time the old ship could take no more. At last, over one hundred days out, she had to turn before the sea or sink beneath it: she ran back to Montevideo in distress. Repaired sufficiently, she put to sea again, took on the Horn once more. But the gales still screamed at her down there without respite. Again the seas smashed over her. In a sudden shift of maddened wind, the whole mainmast went overboard-sails, yards, rigging, everything. As the dismasted hull floundered in the tumult of freezing waters, the broken spars flailed the hull, leaks started, the sea came down below. The pumps were smashed. The dismasting also destroyed the freshwater tank by the foot of the mainmast. Soundings showed three feet of water down below, rising. "Again she had to turn back, this time to the Falkland Islands. It was for the last time." ÂŠAlan Villiers. From The Wavertree: An Ocean Wanderer, South Street Seaport Museum, 203 Front Street, New York 10038.

vice, 1886-1910, years in which the world changed around her, and mest of her sisters dropped out of service, she entered a long half-life as storage barge in Punta Arenas, behind Cape Horn, and from 1948 to 1968 as sand barge in the Riachuelo in Buenos Aires. Even there, with cropped bulwarks and forecastle head, and all but two lowermasts shorn away, the people of the waterfront knew what she was: they called her notponton, or barge, but el gran velerothe great sailing ship. An Ordinary Life She was launched on Thursday, December 10, 1885, one of a series of big full-riggers built for R.W. Leyland & Co. of Liverpool, at the Oswald Mordaunt yard at Southampton on the south coast of England. The newspaper noted her as "a handsomely modeled iron sailing ship of 2150 tons net register ... full rigged and fitted with skysail on mainmast." Leyland had ordered four such ships that year, but before the year ended they must have found they had one too many; they sold her off to Chadwick Pritchard of Liverpool, who renamed her Southgate (the name on her bell, and on her cabin coffeepot, which have been recovered). By March the following year she had cleared Cardiff with a cargo of coal for Singapore. Ironically, transporting Welsh coal to distant points to refuel the British steamships that were replacing sailing ships on most of the world's trade routes, was one way sail still could compete. The development of the fuel-efficient compound engine began to change this in the Wavertree's first SEA HISTORY, WINTER 1980-81