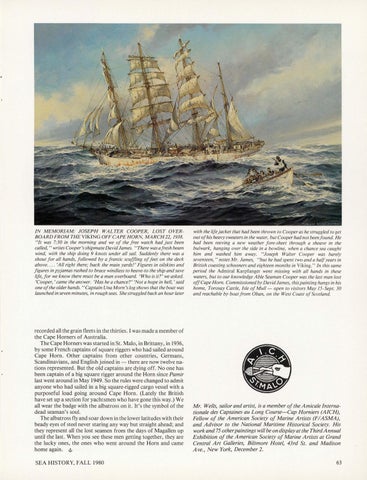 IN MEMORIAM: JOSEPH WALTER COOPER, LOST OVERBOARD FROM THE VIKING OFF CAPE HORN, MARCH 22, 1938. &quot;// was 7:30 in the morning and we of the free watch had just been called,&quot; writes Cooper&#39;s shipmate David James. &quot; There was afresh beam wind, with the ship doing 9 knots under all sail. Suddenly there was a shout f or all hands, f ollowed by a frantic scuffling of feet on the deck above.. .. &#39;All right there; back the main yards!&#39; Figures in oilskins and figures in pyjamas rushed to brace windlass to heave-lo the ship and sa ve life, for we know there must be a man overboard. &#39; Who is it? &#39; we asked. &#39;Cooper,&#39; came the ans wer. &#39;Has he a chance?&#39; &#39;Not a hope in hell,&#39; said one of the older hands.&quot; Captain Una Morn&#39;s log shows that the boat was launched in seven minutes, in rough seas. She struggled back an hour later

with the life jacket that had been thro wn to Cooper as he struggled to get out of his heavy sweaters in the water, but Cooper had not been found. He had been reeving a ne w weather f ore-sheet through a sheave in the bulwark, hanging over the side in a bo wline, when a chance sea caught him and washed him away. &quot;Joseph Walter Cooper was barely seventeen,&quot; notes Mr. James, &quot;but he had spent two and a half years in British coasting schooners and eighteen months in Viking.&quot; In this same period the Admiral Ka rpfanger went missing with all hands in these waters, but to our knowledge Able Seaman Cooper was the last man lost off Cape Horn . Commissioned by David James, this painting hangs in his home, Torosay Castle, Isle of Mull - open to visitors May 15-Sept. 30 and reachable by boat from Oban, on the West Coast of Scotland.

recorded all the grain fleets in the thirties. I was made a member of the Cape Homers of Australia. The Cape Homers was started in St. Malo, in Brittany, in 1936, by some French captains of square riggers who had sailed around Cape Horn. Other captains from other countries, Germans, Scandinavians, and English joined in - there are now twelve nations represented. But the old captains are dying off. No one has been captain of a big square rigger around the Horn since Pamir last went around in May 1949. So the rules were changed to admit anyone who had sailed in a big square-rigged cargo vessel with a purposeful load going around Cape Horn. (Lately the British have set up a section for yachtsmen who have gone this way.) We all wear the badge with the albatross on it. It&#39;s the symbol of the dead seaman&#39;s soul. The albatross fly and soar down in the lower latitudes with their beady eyes of steel never staring any way but straight ahead ; and they represent all the lost seamen from the days of Magallen up until the last. When you see these men getting together, they are the lucky ones, the ones who went around the Horn and came home again. w

Mr. Wells, sailor and artist, is a member of the Amicale Internationale des Captaines au Long Course-Cap Horniers (A/CH), Fellow of the American Society of Marine Artists (FlASMA), and Advisor to the National Maritime Historical Society. His work and 75 other paintings will be on display at the Third Annual Exhibition of the American Society of Marine Artists at Grand Central Art Galleries, Biltmore Hotel, 43rd St. and Madison Ave., New York, December 2.