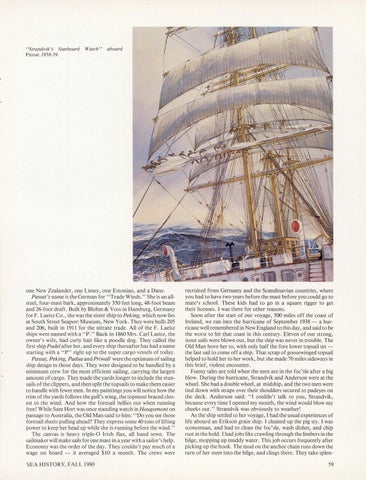 one New Zealander, one Limey, one Estonian, and a Dane. Passat &#39;s name is the German for &#39;&#39;Trade Winds.&quot; She is an allsteel, four-mast bark, approximately 350 feet long, 48-foot beam and 26-foot draft. Built by Blohm &amp; Voss in Hamburg, Germany for F. Laeisz Co., she was the sister ship to Peking, which now lies at South Street Seaport Museum, New York. They were hulls205 and 206, built in 1911 for the nitrate trade. All of the F. Laeisz ships were named with a &quot;P.&quot; Back in 1860 Mrs. Carl Laeisz, the owner&#39;s wife, had curly hair like a poodle dog. They called the first ship Pude/after her, and every ship thereafter has had a name starting with a &quot;P&quot; right up to the super cargo vessels of today. Passat, Peking, Padua and Priwall were the optimum of sailing ship design in those days. They were designed to be handled by a minimum crew for the most efficient sailing, carrying the largest amount of cargo. They made the yards longer to include the stunsails of the clippers, and then split the topsails to make them easier to handle with fewer men. In my paintings you will notice how the trim of the yards follows the gull&#39;s wing, the topmost braced closest to the wind. And how the foresail bellies out when running free! While Sam Hort was once standing watch in Hougomont on passage to Australia, the Old Man said to him: &quot;Do you see those foresail sheets pulling ahead? They express some 40 tons of lifting power to keep her head up while she is running before the wind .&#39;&#39; The canvas is heavy triple-0 Irish flax, all hand sewn. The sailmaker will make sails for one mast in a year with a sailor&#39;s help. Economy was the order of the day. They couldn&#39;t pay much of a wage on board - it averaged $10 a month. The crews were SEA HISTORY, FALL 1980

recruited from Germany and the Scandinavian countries, where you had to have two years before the mast before you could go to mate&#39;s school. These kids had to go in a square rigger to get their licenses. I was there for other reasons. Soon after the start of our voyage, 500 miles off the coast of Ireland, we ran into the hurricane of September 1938 - a hurricane well remembered in New England to this day, and said to be the worst to hit that coast in this century. Eleven of our strong, stout sails were blown out, but the ship was never in trouble. The Old Man hove her to, with only half the fore lower topsail set the last sail to come off a ship. That scrap of goosewinged topsail helped to hold her to her work, but she made 70 miles sideways in this brief, violent encounter. Funny tales are told when the men are in the foc&#39;sle after a big blow. During the hurricane, Strandvik and Anderson were at the wheel. She had a double wheel, at midship, and the two men were tied down with straps over their shoulders secured to padeyes on the deck. Anderson said: &quot;I couldn&#39;t talk to you, Strandvik, because every time I opened my mouth, the wind would blow my cheeks out.&quot; Strandvik was obviously to weather! As the ship settled to her voyage, I had the usual experiences of life aboard an Erikson grain ship. I cleaned up the pig sty. I was sconceman, and had to clean the foc&#39;sle, wash dishes, and chip rust in the hold. I had jobs like crawling through the limbers in the bilge, mopping up muddy water. This job occurs frequently after picking up the hook. The mud on the anchor chain runs down the turn of her stem into the bilge, and clings there. They take splen59