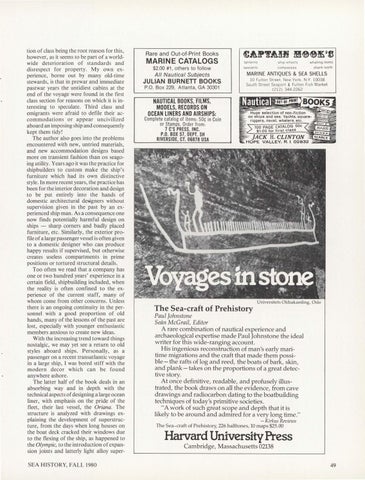 tion of class being the root reason for this, however, as it seems to be part of a worldwide deterioration of standards and disrespect for property. My own experience, borne out by many old-time stewards, is that in prewar and immediate pastwar years the untidiest cabins at the end of the voyage were found in the first class section for reasons on which it is interesting to speculate. Third class and emigrants were afraid to defile their accommodations or appear uncivilized aboard an imposing ship and consequently kept them tidy! The author also goes into the problems encountered with new, untried materials, and new accommodation designs based more on transient fashion than on seagoing utility. Years ago it was the prac_tice for shipbuilders to custom make the ship&#39;s furniture which had its own distinctive style. In more recent years, the practice has been for the interior decoration and design to be put entirely into the hands of domestic architectural designers without supervision given in the past by an experienced ship man. As a consequence one now finds potentially harmful design on ships - sharp corners and badly placed furniture, etc. Similarly, the exterior profile of a large passenger vessel is often given to a domestic designer who can produce happy results if supervised, but otherwise creates useless compartments in prime positions or tortured structural details. Too often we read that a company has one or two hundred years&#39; experience in a certain field, shipbuilding included, when the reality is often confined to the experience of the current staff, many of whom come from other concerns. Unless there is an ongoing continuity in the personnel with a good proportion of old hands, many of the lessons of the past are lost, especially with younger enthusiastic members anxious to create new ideas. With the increasing trend toward things nostalgic, we may yet see a return to old styles aboard ships. Personally, as a passenger on a recent transatlantic voyage in a large ship, I was bored stiff with the modern decor which can be found anywhere ashore. The latter half of the book deals in an absorbing way and in depth with the technical aspects of designing a large ocean liner, with emphasis on the pride of the fleet, their last vessel, the Oriana. The structure is analyzed with drawings explaining the development of superstructure, from the days when long houses on the boat deck cracked their windows due to the flexing of the ship, as happened to the Olympic, to the introduction of expansion joints and latterly light alloy superSEA HISTORY, FALL 1980

Huge selection of non-fiction on ships and sea. Yachts, squar

The Sea-craft of Prehistory Paul Johnstone Sean McGrail, Editor A rare combination of nautical experience and archaeological expertise made Paul Johnstone the ideal writer for this wide-ranging account. His ingenious reconstruction of man&#39;s early maritime migrations and the craft that made them possible - the rafts of log and reed, the boa ts of bark, skin, and plank - takes on the proportions of a great detective story. At once definitive, readable, and profusely illustrated, the book draws on all the evidence, from cave drawings and radiocarbon dating to the boatbuilding techniques of today&#39;s primitive societies. &quot;A work of such great scope and depth that it is likely to be around and admired for a very long time.&quot; - Kirkus Reviews The Sea-craft of Prehistory, 226 halftones, 10 maps $25.00