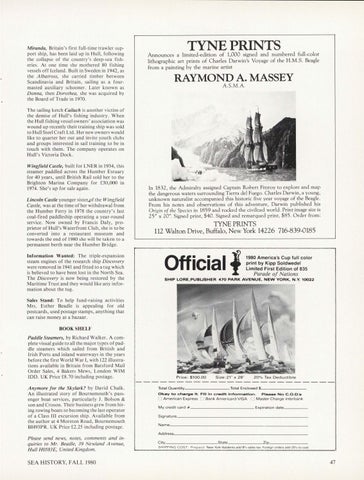 Miranda, Britain&#39;s first full-time trawler support ship, has been laid up in Hull, following the co lla pse of the country&#39;s deep-sea fisheries. At one time she mothered 80 fishing vessels off Iceland. Built in Sweden in 1942, as the Albatross, she carried timber between Scandinavia and Britain, sailing as a fourmasted auxiliary schooner. Later known as Donna, then Dorothea, she was acquired by the Board of Trade in 1970.

Announces a limited-edition of 1,000 signed and numbered full-color lithographic art prints of Charles Darwin&#39;s Voyage of the H.M.S. Beagle from a painting by the marine artist

The sailing ketch Cailach is another victim of the demise of Hull &#39;s fishing industry. When the Hull fi shing vessel owners&#39; association was wound up recently their training ship was sold to Hull Steel Craft Ltd. Her new owners would like to quarter her out and invite youth clubs and groups interested in sail training to be in touch with them. The company operates on Hull &#39;s Victoria Dock.

Wingfield Castle, built for LNER in 1934 , this steamer paddled across the Humber Estuary for 40 years, until British Rail so ld her to the Brighton Marina Company for £30,000 in 1974. She&#39;s up for sale again. Lincoln Castle younger sister_pf th e Wingfield Castle, was at the time of her withdrawal from the Humber Ferry in 1978 the country&#39;s last coal-fired paddleship operating a year-round serv ice . Now owned by Francis Daly , proprietor of Hull&#39; s Waterfront Club, she is to be converted into a restaurant muse um and toward s the end of 1980 she will be taken to a permanent berth near the Humber Bridge .

·~ --~ In 1832, the Admiralty assigned Captain Robert Fitzroy to explore and map the dangerous waters surrounding Tierra del Fuego. Charles Darwin, a young, unknown naturalist accompanied this historic five year voyage of the Beagle. From his notes and observations of this adventure, Darwin published his Origin of the Species in 1859 and rocked the civilized world. Print image size is 25&quot; x 20&quot;. Signed print, $40 . Signed and remarqued print, $85. Order from:

Information Wanted: The triple-expansion steam engines of the research ship Discovery were removed in 1941 and fitted to a tug which is believed to have been lost in the North Sea. The Discovery is now being restored by the Maritime Tru st and they would like any information about the tug.

Paddle Steamers, by Richard Walker. A complete visual guide to all the major types of paddle steamers which sailed from British and Irish Ports and inland waterways in the years before the first World War I, with 122 illustrations available in Britain from Batsford Mail Order Sales, 4 Bakers Mews, London WIM IDD. UK Price £8.70 including postage. Anymore for the Skylark? by David Chalk. An illustrated story of Bournemouth&#39;s passenger boat services, particularly J. Bolso n &amp; son and Croson. Their busin ess grew from hiring rowing boats to becoming the last operator of a Class Ill excursion sh ip. Available from the author at 4 Moreton Road, Bournemouth BH93PR. UK Price £2.25 including postage.